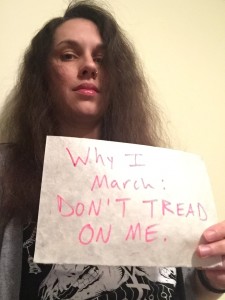 Women across the United States will march on January 21st, 2017 to show that a diverse yet unified populace is prepared to defend human rights against an administration that seeks to erase decades of progress.  Here’s why I’ll be among them that day:

First, the Republican-controlled Congress is going after women’s health like an unmanned drone headed to bomb a children’s hospital — completely misguided and exacerbating the problem it’s supposed to solve.  Their most recent declaration is that Congress will vote to “cut off federal tax dollars” for women’s healthcare provider Planned Parenthood in order to push their anti-choice agenda.  Taking federal funding away from this organization will make it more difficult for low-income women to get, amongst other things, contraception.

…So it logically follows that those who are least prepared to handle an unplanned pregnancy will be more at risk for that very problem.  This NPR article explains how federal funds are currently directed to Planned Parenthood — and spoiler alert, it’s not for abortions.  Regardless of what the money is used for, the new administration needs to know that the United States is not going back to the days before Roe v. Wade.   Abortion must remain safe and legal, a decision made privately by a woman, her family, and her doctor.

Second, our President-Elect has repeatedly shown his disdain for the free press.  He tweets about the “dishonest media” and “fake news” on practically a daily basis.  It’s hard to tell which he hates more, the press or Meryl Streep.  In October, he even threatened to sue the New York Times for reporting on accusations of his lewd behavior.  Of course that’s old news now with the never-ending circus Donald Trump creates…

Meryl Streep, one of the most over-rated actresses in Hollywood, doesn’t know me but attacked last night at the Golden Globes. She is a…..

But if that incident is any indication of the his administration’s future treatment of the media, we’re in for a fight.  Now more than ever, it is vital to defend our free press, the hallmark of any free nation — all the way from the New York Times to miniscule blogs like this one.  We must let the new government know that their actions are being reported, analyzed, and scrutinized by millions of able, literate people who will not stand aside while their rights are taken away.

Dishonest media says Mexico won’t be paying for the wall if they pay a little later so the wall can be built more quickly. Media is fake! — Donald J. Trump (@realDonaldTrump) January 9, 2017

My reasons for marching are not unique or unprecedented.  They’re just common-sense tenets shared by the majority of the United States voting population — and I want to say that when the line in the sand was drawn, I stood on the right side of it.

That’s #whyImarch.  How about you?