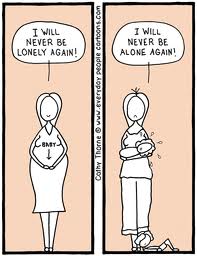 As a woman who’s almost 28 and almost married, I’ve been hearing a lot of the same two questions lately:

“How are the wedding plans going?” and,
“When are you going to have kids?”

My answer to the first question is, “Great!”  For the second, “Oh, probably in a few years…” But I’m really thinking, “Fucked if I know, lady!”

The truth is, I have mixed feelings about kids.  Most of the time I feel like an overgrown kid myself — except when I’m hung over after four or five drinks and think, “Wow, I’m getting old!”  There are definitely a lot of cons to reproducing, but a few strong pros might outweigh them…

The first con is that kids are a lot of fucking work.  Michael Field wrote in his article “The Selfish Decisions” that it’s impossible to appreciate what it’s like to have kids before you have them, unless perhaps you’ve worked as a “nanny, au par, or assistant to the stars.”  Well, my stepmother paid me good money during college to watch my much-younger brothers and take care of the house while she was working.  In addition to keeping the boys safe, fed, and somewhat entertained, I cleaned, cooked, shopped and did laundry; it was a lot of work, but it was my job — not something I was doing in addition to working full-time, paying a mortgage, attempting to maintain a good relationship with a spouse…  The experience gave me a lot of respect for working moms, and it also has made me wary of taking on that level of responsibility.

Another con: kids are fucking annoying.  For the first couple years, they scream and poop everywhere.  Around age four, a seven-year window begins where they’re mostly obedient and agreeable; then they become tweens and decide that you’re the most idiotic, despotic person on the face of the earth and everything you do or say is “muff cabbage.”  They become agreeable again at seventeen, but that’s because they want you to pay for college.  (“And can you buy me a laptop, too?  How am I supposed to go to college without a laptop??”)  So you buy them a laptop (“And a car — I really need a car!”), you put them through four or five years of college… And just when you think you can afford to go out to dinner, THEY WANT TO MOVE BACK IN!   NOOOOOOOO!  Fucking go away already!  Why would I sign myself up for that?

And that’s the crux of the issue right there — why would I sign myself up for that?

Well, I’ll refer to Field’s article again.   I want to be a good mom like my mom was to me.  I’d selfishly like to create something awesome.  (Of course my kid would be awesome…. Not like other people’s shitty kids.)  I want for my fiancee and me to create something together besides a mediocre classic rock cover band.  (You know I don’t mean that, CTCR — you’re one of a kind!  Not like the other 500 classic rock bands that play every Saturday night in Connecticut…)

What it boils down to is that most of the things I spend time doing are just that: things.  Work?  Dumb.  Drinking on the weekends?  Dumb.  Music?  Fun, but spawning and playing music aren’t mutually exclusive.  Plenty of musicians I know have kids.  Writing?  Same thing — if every writer had to put down the pen once he or she reproduced, the world would be fully of shitty, inexperienced writers.  Besides, when I think of what’s really important to me and makes me who I am, I immediately think of my family before anything else.  Why wouldn’t I want to have a family of my own?

I do have some real fears related to having kids, aside from the fact that they’re annoying and exhausting.  What if I had a kid with serious disabilities?  What if I wasn’t such a great mom after all?  What if my kid hated me or turned out to be a drug addict or something?  What if “things changed” between me and my soon-to-be husband, in a negative way?

So, to spawn or not to spawn…  Good fucking question.  I suppose the fiancee has some opinions on this, too — after all, it takes two to get knocked up.  One thing I do know for sure is that we need to wait until after the wedding, because there’s no way a fetus can fit in that dress!