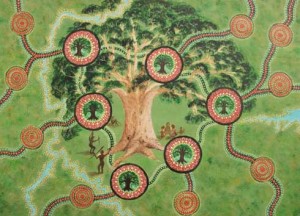 Clutching your second cup of morning roast — extra bold — you meander to your computer to check your inbox. Remnants of last night’s dreams slowly blur into a more black and white still of early morning. Nothing profound is ever found in the spam box, you say as the steam from the cup clumsily climbs the walls of your nostrils and into your consciousness. But maybe we all have to encounter a little spam before we get to that accomplished prose we had promised ourselves when we started.  So we give in to the all and anything of small peculiars, ignoring spelling errors, stepping over the line, cement breaking under our feet, until we feel as though every detail of our recollection has been outlined — however trite or trivial, the path has been made.

I suppose someone once had the great idea that it’s better to have a rough path than none at all. (That someone was definitely not me.) That optimism is related to chance in more ways than people would like to admit, but optimism doesn’t do much of that blue collar path building. It only leads us to the spot where we begin; all else is based on the kinetic, the action after that choice.

So we find a patch of green that reminds us of our childhood playground, and we dig. How deep, how wide, how far — that is indefinable. The only point we can decipher at this moment is the beginning.  Far off, there is the destination, the future of the theoretical line that we are to walk to get to an end — or possibly just something we call an end because no one has ever been there and back with a universal definition of stopping, ending, ceasing, or even pausing, that all languages can communicate effectively.

As we dig — dirt and rocks mere signatures of the unique steps only we have taken — we start to notice something that we can see, hold and maybe even define. That picture, sound, shape is unique.  However it is also shared — shared because that epiphany is an essential part of human growth, but the actual experience is unique to only us.

What drives this persistence to find an almost tangible place amongst the dark of the unknown? Simply feeling?  Simply the desire to know?  More like molding a shape to what has none as proof that we have been there, that we do know. And for what? That’s a personal decision.

Decisions are much like rants. The thought processes behind the finality. The steps, unseen, and even hard to know, before potential becomes kinetic.  But, rants are most definitely thinking — at least through the utterance of impulsivity — while taking action.

Chances. With an optimistic initiative and a grounded first step, rants can begin.  But turbulence will follow, and rightly so. Paths we did not think we chose are very much related to the ones we did.  And as life and time are never definable, straight segments or arrows, we must jump. But know the birth of your path. Then shape it for the sake of sharing the knowledge you’ll obtain through such experience.