By Christopher Baldwin and Jessie May

If you’ve been on the internet recently, you know that the FCC plans to repeal net neutrality regulations on Thursday, December 14th, 2017.  The reasoning behind this move defies logical explanation, as it only benefits internet service providers.  But in spite of a deluge of protests from individuals and companies, it’s probably going to happen.

Watch here to see how the net neutrality repeal changes the game for consumers:

And for a more in depth, NSFW explanation, check out this segment from John Oliver:

If all this doesn’t want to make you close this website and binge all the Netflix you can while you’re not paying an arbitrary “streaming video” fee to Comcast, continue reading for Baldwin and Jessie’s reflections on the matter:

I don’t have enough political knowledge or background to adequately comment on the FCC’s motives behind their attack on net neutrality. I can only surmise what a world without net neutrality would be like. So let’s just say that net neutrality is abolished and all our fears come true. I have every bit of faith that an average, middle-class consumer like myself who already pays a substantial fee to internet providers is going to contemplate just how much of the internet is a necessity, and how much of it is luxury.

People will make surprising moves to keep themselves from being pushed into a financial corner. Extra money for Facebook? I’ll just keep in touch with my close friends in other, maybe more meaningful ways. Extra money for music? Gee, I haven’t been to a record store in awhile. Extra money for news? They still print actual newspapers right?

My point is this: Internet providers don’t have their fingers around us like they think they do. Sure, many companies rely on internet access for their everyday operations. Lots of people in corporate fields have jobs that revolve around the internet. We can’t take it out of our lives completely. But there’s ways to curb the effects of greed and simultaneously bring ourselves greater fulfillment. We can turn a negative into a positive. 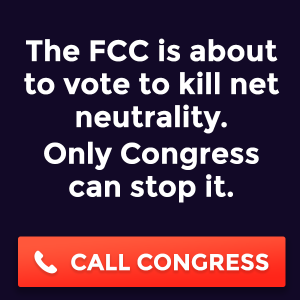 We’ll have to wait and see what happens and to what extent, obviously. But let’s just say people make significant cutbacks in internet use.  The implications of people turning away from the internet are far bigger than saving money and spending more time outside. Socially, it has the potential to set communication back a number of years. If people start saying goodbye to social media and messaging, contact between friends, family, co-workers and employers would become way more complicated. People might lose contacts altogether. Blogs and news media outlets like this fine website will have significant troubles finding an audience.

Economically, companies that provide streaming services, gaming, video and other forms of entertainment will see huge drops in numbers and income. Monster corporations like Google, Facebook, Apple and Amazon will suffer for it. If I can’t afford to access the internet because of my monthly smartphone bill, then why the hell do I need it? I’d most likely give it back and buy a flip-phone for calls and texting.

I had a conversation recently about net neutrality with my wife and a close friend. They both had enlightening things to say about the largest threats of this movement. Repealing net neutrality means the repression of valuable knowledge and information. For the internet to remain a vital tool of technology for the benefit of mankind, it needs to be accessible to everyone. Turning it into a piece of expensive merchandise distributes its power into the grip of a select few controllers. It’s a dangerous notion that has the potential to open up a reality of censorship, lies and oppression. Maybe I’ll start clearing out a corner of my apartment for my new telescreen.

I like where Baldwin is going with his commentary: if net neutrality is repealed and internet prices subsequently increase, the Proles will rise up against the internet’s retail and entertainment giants, bringing business back to brick-and-mortar stores and returning social interactions to real life.  (Or at least to very arduous flip-phone text conversations…)

I hope he’s right.  So then what would the net neutrality repeal mean for your favorite blog?  Like Baldwin said, we’d have to wait and see — but if the cost of putting out our content increases past a certain point, you might be getting a lot less of “Metal… And everything else you need to live.”

Jade and I founded Alternative Control in 2010; both English majors, we would always wax poetic about starting our own magazine.  However, the cost of printing and distributing a magazine (never mind figuring out how to design it) kept this idea in the realm of “sweet drunk talk” — until one day, it dawned on us that we could put our magazine on the internet.  Forget soliciting advertisers or driving to every coffee shop in two counties to leave copies no one would read.  Having a website as opposed to a print magazine gave us an unlimited potential audience for a very low price — now in 2017, the hosting and domain name cost about $120 per year.  I use Facebook, Twitter, Instagram, and Pinterest to share our content; my monthly internet bill is $55 and my smartphone costs $65, but of course I use my phone and laptop for plenty of things that have nothing to do with the blog.  I’m willing to part with those amounts of money to binge Netflix, communicate with friends, listen to music, read the news, shop online, and do all the blog stuff.  Plus, I’m usually able to crowdfund the hosting costs and/or generate that money from sponsored posts.  In other words, funding the blog is not a big deal at this point. 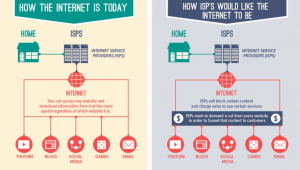 Graphic borrowed from LinkedIn, who borrowed it from someone else. I put this in my book review too.

But let’s say that once net neutrality was repealed, I would have to pay extra for a “social media bundle.”  Social media is essential to the blog; no one would read our articles if we didn’t share them somewhere.  So how much would that be each month, an extra $10?  $25?  $40?  Then what if I had to pay a fee each year for the website to load at a fast rate?  The costs would start to add up and I’d have to consider if it was feasible to continue running the website.  Perhaps we could increase our crowd-funding endeavors or have more sponsored content.  Or perhaps it would be time to close this chapter in favor of less expensive hobbies.

Beyond the fate of our little website, the net neutrality repeal carries some personal implications.  For instance, how much do my friends and I need social media?  How would friendships operate if I chose not to use it, or was priced out?  What would I do with all the time I wasn’t spending binging Vikings?  (Good thing I just finished reading all about addictive technology….)

On a broader note, the net neutrality repeal will also deepen the digital divide; the amount of people disenfranchised by lack of access to technology will only increase as prices rise.  Public libraries are beacons of light in the quest to close that gap; how will mounting costs affect the services libraries can provide as they see a growing number of patrons coming in to use the internet?

The next logical question is this: what can the Proles do to preserve net neutrality?  I’m not optimistic that we can prevent the repeal because the Ministry of Truth, er, current Republican-controlled Congress will be unwilling to pass a law that prevents it.  However, we can always vote in some more agreeable gatekeepers of the oligarchy at the next election, who will pretend to agree with us and give us back our Netflix.  Visit www.gofccyourself.com and click Express to share your valued opinion.