As we embark on our eighth Nerd Talk column, I’m starting to see some commonalities.  UK punks Trevor’s Head are the second band to mention Terry Pratchett as a favorite author — Pratchett is also enjoyed by TH’s countrymen in Oceans.  For movies, it seems like someone always likes something Japanese, a horror movie, and/or The Big Lebowski.  I guess it shouldn’t come as a surprise that our indie heavy music subculture shares a common culture!

But without further ado, check out what Trevor’s Head has to say about their favorite movies, video games, and books! 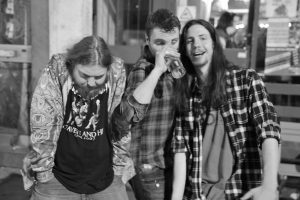 Film: It’s hard to choose one but I love the bizarre plots of the Coen Brothers.  Lebowski and Fargo are definitely up there. Couldn’t go without giving City of God a mention either. An absolute masterpiece and one of the most gripping films I’ve seen.

Games: Would have to be Smash Bros or Burnout. Many hours were wasted smoking bowls on my mate’s sofa with those to accompany us!

Books: Always enjoyed Terry Pratchett from a young age. You can really create a vivid image of these crazy worlds through his story telling and never fails to get a laugh. 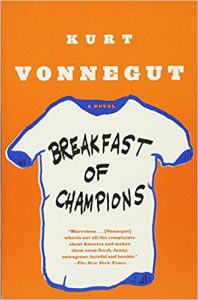 Movies: Akira. To me, it’s the pretty much the be all and end all of dystopian sci-fi. It’s among the first anime I ever watched and it got me hooked for life. I’ve watched it a ridiculous amount of times, easily over 30. It never gets old and the animation is so rich that there’s always something new to spot. The animators used more than 320 different colours in the process of drawing it, 50 of which were created specifically for the movie. That’s fucking insane. I can’t overstate how beautiful it is. Also, in terms of a soundtrack matching the mood and images of the movie, it’s almost unbeatable.

Books: Anything at all by Kurt Vonnegut. I honestly can’t choose, I haven’t read a single book of his that I haven’t enjoyed. A lot of them are sort of sci-fi based, but in a loose and unconventional manner. He’s one funny dude too, strikes me as one of the most warm-hearted people to put pen to paper. Cat’s Cradle or Breakfast Of Champions would probably be my first recommendations to newcomers. Oh, and The Stars My Destination by Alfred Bester. That’s fucking rad.

Movies: The Blues Brothers. It’s got the most amazing sound track, it’s daft as fuck and it just oozes cool. I watched it every night after school for about two months when I was a kid and it will never get old. “It’s a hundred and six miles to Chicago, we’ve got a full tank of gas, half a pack of cigarettes, it’s dark, and we’re wearing sunglasses. Hit it!”

Books: TV Guide is probably the most consistently read so I guess that’s my favourite.

Games: GTA will always be my favourite. And the original Prince Of Persia on PC. For a game on floppy disks, it was bloody hard to beat! Oh, and right now it’s Assassins Creed: Black Flag. I’ve always had a thing for pirates — I guess it’s something to do with the name.

I agree with Roger that the sunglasses quote from Blues Brothers never gets old.  Have a listen to Trevor’s Head’s raw blend of grunge, punk, and hardcore.  I don’t know what the hell I’m talking about half the time with all these subgenres, but hardcore is a state of mind, brahhhhhhh — and these guys definitely have it.