This is me ranting about being a puppy mamma.

“Oh, it’s terrible. He kisses me and cuddles me and runs around the house in the most amusing manner! And I can’t stop looking at him or kissing him in his sleep. And I get to rub his belly and take him on long walks and watch him as he puts things like Slim Jim wrappers and lottery tickets in his mouth.” 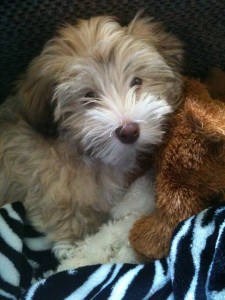 It’s actually amazing, but I wasn’t so sure about it in the beginning. I’ve joked with my husband in the past – “If you ever get another dog I’m leaving you.” Our dearly departed dog Reggie was a poorly trained, spoiled and well-loved beagle. He howled at thunderstorms, took up the better portion of both the couch and the bed and he ate everything he could get his mouth on, including a slice of pound cake wrapped in cellophane. I really wanted that pound cake, too.

After our bunny Nutmeg died, and after a healthy amount of heavy grieving, it became time to get another pet. I contacted Nutmeg’s breeder looking for another rabbit. Unfortunately, she isn’t breeding rabbits anymore, she’s breeding Havanese. For me this became a no-brainer. If I was going to have a dog I wanted one that was related to my beloved bunny.

One week after Christmas we got the news: we were going to be parents of a little boy. Those seven weeks waiting for the day we could bring him home were the most dizzying, effective, anxious, productive and drawn out, balls-to-the-wall, long ass weeks I’ve ever lived. My house had never been so clean and organized. And safe for the puppy! We had a friend come over and help us install a custom puppy gate, I put child safety locks on all the cabinets and mostly, I worried.

I worried about everything specifically. When we went up the day before I felt physically ill, and when my husband mentioned as we stopped for lunch that Apollo was likely to be his last pet I almost burst into tears in the middle of the dining room. Oh, now I feel great. This is it for me. I get the dog, my husband dies and I’m living in the Blazer with a Havanese. It’s a huge responsibility taking care of a dog and I wasn’t sure what it was going to be like and how I was going to handle it.

Here I am six weeks later and this little creature has completely changed my life. The first few weeks were friggin’ focus fests – trying to keep an eye on a rambunctious runt every waking moment is exhausting. We were prepared, but somehow we missed the space between the cabinet and the dishwasher. A little duct tape will fix that. And he’s peeling the finish off the vanity, more duct tape. And this staple is coming out of the recliner and he’ll cut himself on it. More tape.

Oh, that’s right, I wasn’t going to have kids. Well it appears I have, he just happens to be Havanese. Now I know what Michael Field was talking about when he mentioned time management. While Apollo sleeps I shower, do the dishes, the laundry, take out the garbage and write full-length plays. When he’s awake I’m the helicopter parent extraordinaire. I cheer his bodily functions, serve as activities director and generally attend to his every need and whim. He is a mamma’s boy. One of the first times I left him home with my husband he got so upset that he threw up. Aww, my poor baby. But the greeting I get when I return – he pins his ears back, whimpers, grabs me by the forearm with his mouth and tries to drag me into his corner where he keeps all his toys. That’s puppy speak for “I love you.”

Even still, all of this is somewhat bittersweet. If my bunny Nutmeg hadn’t passed away when he did we wouldn’t have Apollo. That makes me sad. But that’s the way it works, I guess. Overwhelming joy is sometimes born of unimaginable sorrow.  Now, if you’ll excuse me, I’m going to go kiss my puppy.