“Hell is other people.”  –  Jean-Paul Sartre
People can be crass, thoughtless, and tactless.  Perhaps they’re simply unaware of how their comments impact others.  Maybe it’s passive-aggressive hostility, or maybe plain stupidity.  The contributors at Alternative Control are feeling the need to share some of these everyday gems.

How do you respond to these ignorant, insensitive comments and questions?  Chop someone in the neck, ignore them, paraphrase it back so they can reflect on its ignorance, turn the question back on them, sarcasm…. Vegetarian Metalhead, Rachael Pixie Kruczynski, The Headbanging Hostess, and Jessica May weigh in below on various ill-mannered scenarios. 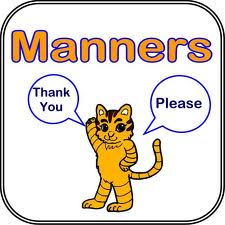 “Hello, please, and thank you are free”

HBH: As someone who spent too much of her life serving customers I have to admit I am hyper sensitive about manners. I’m always super friendly to cashiers (even the ones at Fairway) and other people that may be serving me. ESPECIALLY servers at restaurants. I’ll cut them as much slack as I can. My years at the Pacific Pizza Palace (name changed to protect the guilty) showed me what assholes people can be. Favorite memories include being ignored when trying to greet a table, being talked down to like I was a lesser human being (when in fact they were the lesser beings, choosing to eat Pacific pizza in one of the best pizza towns in CT) and people prefacing their order with “Give me” or “I want” instead of “I would like” or “May I please have?”

JM: Retail workers really get the short end of the stick.  I specifically remember that one reason I was happy about finishing college was so that I could expand my job options beyond Starbucks… Which meant I wouldn’t have to work on Thanksgiving or Christmas.  Starbucks was pretty good to me, but that was my one qualm: people don’t need fancy coffee on Christmas.  It’s not dialysis, it’s a latte.  Make your own coffee and let the retail serfs, er, baristas spend the holiday at home.

That was six years ago, though, in quainter times — this year, many large retailers were actually open on Thanksgiving so that people could buy useless shit every single day up until Christmas.  Shame on anyone who went shopping, for giving the corporate behemoth exactly what it wanted.  You couldn’t wait another day to put useless shit on your credit card?

You might be wondering why I connect this to manners.  As Pixie will get into a little later, manners are all about appropriateness and respect.  By keeping nonessential services open on holidays, businesses are telling their workers, “You’re not important enough to enjoy a holiday with your family.”  Which sucks.  Hospitality businesses have a case for staying open, but Starbucks, Stop and Shop, Wal-Mart, and the movie theater do not. 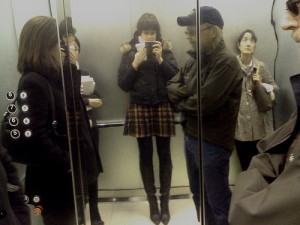 Elevator Etiquette:  the unspoken, commonsense rules we follow to make the work day a little more tolerable.
VM: I work across the hall from a young, “cool” technology company staffed with boys wearing slippers and ironic shirts.  I give them a nod and hello as I walk by in the hallway and instead of acknowledgement I get a blank stare.  I don’t know if it’s because they’re shy, they think girls are yucky or because Generation Y really has no manners!  Which leads to their elevator etiquette…

These boys break every rule on each elevator ride.  They race into the elevator before allowing passengers to exit first, then push the button for their own floor without asking where others are going to, they talk on their phone, and they disregard personal space.  The worst offense of all is facing the passenger instead of facing front and center.  That is fighting body language where I grew up!

Overstaying your welcome
HBH: I have a friend who talks too much. He knows he talks too much. He’ll admit it as he’s going on talking too much. (Hi, Rob) But this is part of what we love about him and why he is in our friend pool. I have my friends pretty well trained to be out of my house by 10:30 at the latest. Be aware. When your hosts start yawning, looking at the clock and chewing Ambien like Tic Tacs it might be time to go.

VM:  I admire your 10:30am policy.  We have a few friends who sleep over and then won’t leave until we literally have our coats on with grocery list in hand.  I blame myself for not being direct and saying, “you motherfuckers can sleep over but you have to leave first thing in the morning.”  I’m too much of a wimp.  After a night out, I want to sit in an anti-social coma and surf the internet. 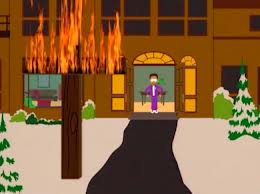 JM: I agree with The Headbanging Hostess and Vegetarian Metalhead — overstaying your welcome is seriously annoying!  A lot of shows turn into slumber parties at my house, which is fine.  But the next day, after I’ve made breakfast and cleaned up the kitchen, it’s time for the crashers to clear out.  Other possible cues: my husband and I are leaving the house to go to Target, I am going to visit my family in West Haven…  Seriously, do I have to burn a lower case “t” in my living room?

I do have some polite crashers, though.  Making the bed in the guest room and bringing beer bottles to the recycling bin outside will earn you major brownie points — as will being out of the house by noon.  I’ll make those folks breakfast any time.

“You look tired.”
VM:  Thanks, now I’m going to slap you.  What if something tragic happened and I was up all night?  Guess what?  It’s called aging, working full time, having a life, etc.  Ya, I’m tired.

RPK: When I say, “I’m exhausted – I’ve had insomnia most of my life” in response, I get a list of 10,000 different insomnia remedies as if the person is the one who discovered melatonin and they have finally given me the innovative cure for my sleepless nights.  And maybe I sound grumpy writing this because I was up from about 3am-7am last night, thinking about how I’ll be able to do all sorts of future things, especially if my taxes go up, and the true meaning of the new year.

Along those same lines, strangers commanding you to smile or asking why you’re not smiling.
RPK: It’s 7:30 pm, I just sat in traffic on 95 for an hour to get here, and grab something that I can cook that will enable us to eat a decent meal before 10pm.  Random stranger in line behind me, I am not smiling because I can think of 10,000 things I’d rather do. Or, for all you know, I just found out I have cancer. (Sounds insane? That actually happened to me. I got the call from the doctor while I was at work, that I would need surgery on my leg. I, as I think most people would do, stopped at the liquor store on the way home. A man was very bothered by my lack of smile.  Not as bothered as I was by his issue with it, which I made known.) (Sidenote: back when I went to the world’s best therapist, she said, “Why didn’t you tell him you were just diagnosed with cancer? That would certainly make him think twice about bothering people in the future, no?”)

Beyond that, did I miss the rule that we have to walk around with huge mental patient smiles on our faces all the time? 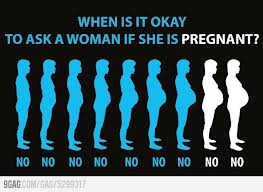 VM:  About 35% of Americans are overweight.  Chances are you’re asking an overweight woman if she’s pregnant.  When someone asks me that question, they’ve made an enemy for life!  Aside from being insulted, I wonder how someone who can’t have children would feel on the receiving end of that question.  My standard reply is, “No, I’m just fat.” Hopefully the direct, brutal response serves as a learning opportunity.

“When are you having kids/aren’t you worried you’re getting too old to have kids?”
RPK: I know there was a roundtable about kids, but seriously, why do people feel the need to question a woman’s personal reproductive decisions in casual conversation.  Honestly, how does one even make that jump? “Oh, look at you, heating up that delicious looking Lean Cuisine in the break room at the office. Now seems like a great time to discuss your fertility”? The biggest problem I have with this question is, there is no “right” answer –  just about every path leads to another discussion.  If you’re like me and the answer is “Never having kids and have been waiting for menopause since my first period,” the ridiculous attempts to convince you to change your mind on a major life decision – and again, this is a co-worker or acquaintance – just suck. I started it saying I simply do not like children. Not only is it generally true, but it shuts people down because most people really don’t want to discuss disliking kids. Desperate times call for desperate measures.

Your friend/handyman
HBH: If you should find yourself doing business with a friend you may need to get in writing how long you expect your friend to stay and work and stay and socialize after doing such work. Lets just say simple projects can turn into 8 hour days, or worse. One such project took weeks longer than it should have and even garnered us a visit on “date night.” And, yes, even after we told him it was our only night together he still stayed to finish the work. Social cues. Listen for them.

RPK: To me, manners can be boiled down to appropriateness.  It really bothers me when someone comes up to me and lets me know they don’t like my clothes/hair/tattoos/what have you.  I see tons of people who look stupid to me, but I was raised with the common decency to not comment on other people’s appearances, especially if I don’t know them.  I realize I sound old, but it’s not being taught to kids. When a kid points and yells (at anyone, not just me) “WHY DOES THAT PERSON (FILL IN THE BLANK)?” It’s considered okay. After all, kids are naturally curious/don’t know better.  I guess that’s true, except, how will they learn if not told “it’s rude to make comments like that”?  I was definitely raised that way. Even if I wasn’t, I live by the most golden rule of all the rules, which is to treat people the way I want to be treated.  I really do think the world would be a better place if more people stopped and thought about that before doing anything and everything.