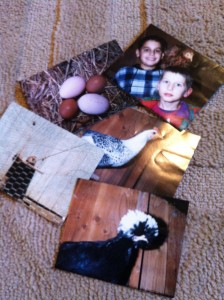 When I was a kid, I lived on a farm.  We had it all: horses, cows, pigs, sheep, goats, chickens, turkeys, guinea hens, even a partridge!  My dad was the brains and brawn behind the operation; I was, for a time, the egg collector.  The chickens were my favorite animals because they were relatively “low-maint” and couldn’t trample you to death you if you got into a scuffle.  I always fantasized about having chickens as an adult, but moving to a different rental apartment each year made that impractical.

My husband and I bought a lovely house last month and I became fixated on getting chickens.  After all, it’s not a home without them!  (Cue husband eye-roll.)  Since I’m the least handy person ever, building my own chicken coop was out of the question.  This almost halted my mission because the cost of buying supplies and paying someone else to build a coop seemed prohibitive.

Instead of explaining every single fiasco that has arisen since the fateful Craigslist ad, let me do this in the style of a credit card commercial: 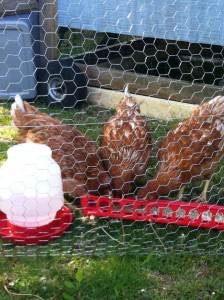 "Let's have a quick snack, then throw this everywhere!"

It was really the moving of the chicken coop that cost the most.  My husband said to me afterwards, “We should have talked this over a little more.”  Perhaps he was right – but once you have a thousand-pound chicken coop on your landlord’s front lawn, there’s no going back.

I have to say, I am getting $600 worth of enjoyment out of the chickens.  (I better, or it’s the soup pot!)  They are dumb and funny.  They don’t eat the treats I try to give them.  They dump their food over.  They try to escape their little turnout.  By the end of May, they should start laying – supposedly 20 dozen eggs a year, EACH.  So to recoup my cash, it’s gonna be scrambled eggs for breakfast, egg salad for lunch, and quiche for dinner seven days a week!

Well, not really.  Friends, start saving your cartons, because you’ve got some $600 eggs coming your way!