This year for Christmas I want a sloth.  Look at em!  I want to gouge my eyes out when I see these loveable sons of bitches.  Dominating the tropical rain forests of Central and South America, these creatures are not only frustratingly adorable, but they’re the slowest mammals on Earth.  So slow indeed that algae grows on their fur.  What’s on their minds?  Do they listen to Doom Metal?  Are they high?  Do they simply not give a fuck?  All I know is that a sloth encounter has quickly risen to the top of my bucket list exactly now.

Sloths are of the Ewok lineage and they know how to slow the hell down and enjoy life.  These fuzzy little bastards have bug eyes, long limbs, wicked claws and wear fixed Mona Lisa smiles on their faces.  They’re so cute it hurts.  Admit it; they’re even endearing taking their euphoric weekly dump.  (http://www.dailymotion.com/video/xrc2vc_baby-sloths-get-potty-trained_fun)  Oddly, “sloths that look like Justin Bieber” and “sloth rhymes with rape” is a thing on the internet.  Huh?

These solitary creatures spend most of their time hanging upside down from tree branches and sleeping.  Sloths chew slow, blink slow, eat slow and move slow, clocking in at about one foot per minute.  Whereas they have amazing arm strength to cling and effortlessly swim, they lack the leg muscles to walk so they crawl instead.  Sloths are able to turn their head 180 degrees kind of like the Exorcist, minus the horrifically evil face. 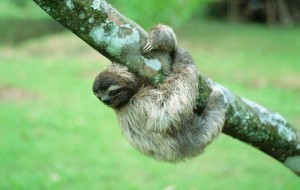 I volunteered to write a column about sloths but I don’t know what else to say besides they’re darling and I want one.  Upon further reflection I couldn’t help but notice I have a lot in common with the sloth.  I’m a lazy, low-energy, quiet, lethargic, receding, slow-moving vegetarian with a perpetual smile on my face… Shit I really am a sloth!  Maybe it’s a symptom of depression or an effort to preserve energy for marathon sitting and television watching, but I’m clearly guilty of this deadly sin and I look forward to my spot in Hell! 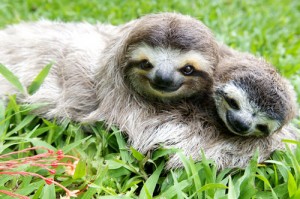 Hence we conceive of the individual animal as a small world, existing for its own sake, by its own means. Every creature is its own reason to be. All its parts have a direct effect on one another, a relationship to one another, thereby constantly renewing the circle of life; thus we are justified in considering every animal physiologically perfect.