By Rachael Kruczynski and Steve Clifford 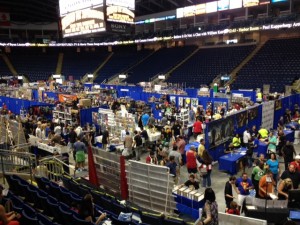 "But where are the Funko Pops?"

*Allow me to quickly explain.  I have been going to, and working at, comic and horror cons since the early 1990s. My esteemed fiancé, Steve, has never been to a big convention before.  In a way, we’re reverse Leonard and Penny at times. And I must admit I quite enjoyed saying “virgin!” every time normal con things happened that took him by surprise. But we’ll get to that….

We arrived at the vastly-improved-since-I-was-last-there Harbor Yard (or whatever they call it now – I can’t keep track of how every arena is constantly changing names) in Bridgeport.  The $10.00 parking fee was a bit steep for my liking (considering they easily made a thousands of dollars on just that, today alone) but such is life.  It was easy to get in, thankfully, no real crazy lines or invasive pat downs. It’s a good start to any con when I don’t go in having a panic attack from the latter, so I have to applaud the staff and security for that great start.

We didn’t know what to expect, as I’ve never been to this particular con.  It was well laid out, with vendors and artists in both the hallway (but with enough room to walk) and rows of the same inside on the arena floor.  Given the space, there could have been slightly bigger walkways on the main floor, but since we probably did the whole con 4 times around, I’m confident we didn’t miss anything.

My first “virgin!” moment was the big con warning that must be given to every first-timer. It’s a simple rule that I am pretty sure anyone who has been to a lot of cons is quite familiar with.  Watch your eye contact. Not with the people wandering, but with anyone who is sitting alone at a not very busy table. Steve only got slightly pulled in by the vampiric gaze of an overzealous seller once, and early in the day. It’s hard not to feel guilty when the sales person or artist desperately wants your attention and sale, but you have no idea who they are or just aren’t interested. This was actually a pretty bustling con and thankfully, this was actually not really a problem the way I have seen it at some others. Again, good job all around.

Speaking of artists: one thing I have noticed in recent years is many tables have become sort of mini craft fairs. Sometimes, this is great – homemade is awesome. I completely fell in love with everything on the table for Tainted Sweets (https://www.facebook.com/taintedsweetsshop). And the girl running the table was so nice! Her lines are well made, and she’s definitely passionate about her product. I could have spent a fortune, if I had one, on her stuff and talked to her all day.

And then there were tables like the one where I said to Steve, “Hah, take note of this stuff.” And then when we walked away, I said, “Let’s swing by Michael’s crafts later, I’ll show you just about everything on that table for pennies on the dollar.”  Someone had pretty much fused together almost every item in the “add a hoop and it’s jewelry you made!” aisle from that store. Yeah… not quite working for me, especially not at the kind of prices where you’d expect one-of-a-kind or unique pieces.  Some others had adorable things that were just a little pricy for homemade craft-type items. Speaking of homemade, the “adopt a robot” art table was amazing and I was mesmerized by it. I would have adopted robots left and right if I had the money and hope I see them again when I do have money to spend.

Meanwhile, Steve and I were on our usual quest for Funko Pops, as we both collect them and it’s one of our shared things. Wow, is all I can say to that end. Some of these dealers are hilarious when they slap prices on things, with no knowledge of the figure’s actual market value. And really – I need to mention that they are mostly dealing with collectors here. Stop slapping price tags and stickers on the cards/boxes. This especially applies to Funko Pops, which the vast majority of collectors display in the boxes because the boxes are just as much a part of the collection as the figures themselves. There were a few that caught our eyes, all of them priced at $20 or more. (Note: retail is $8.95-$10.95 in general.) And some of these vendors literally had 50 (insert store name here) exclusives that they clearly went and bought the entire stock of, only to jack up the prices.  Disapprove! Dislike! Do not support this!

Back in the day, people like that were shunned – when the toy-collecting community was a little more close-knit and a lot less mainstream.  Nobody liked a greasy scalper who bought up all the stock so they, personally, could profit.  (Though guy thinking you were going to make a killing on the “Walking Dead” Wal-Mart exclusive black & white Daryl Dixon? It goes for around $8 on eBay on average. It’s not a $30 piece. Sorry. Hope you enjoyed packing them back up to haul home.  Same to you, guy with the black and white Harley Quinns en masse.)  One guy had his own exclusive glow in the dark Wolverine – which was very cool, but $40 so Steve did not add him to his X-Men collection.  But no disrespect there – it would have ended up on the wall if we had more money. The most important thing is to shop around. One guy got nasty when I said no to a $25 PX exclusive Biker Daryl; but a guy two rows over had the same one for $15, which is reasonable for an exclusive. Always shop around.

On an amusing note, lady who told me she’d give me a good deal on “original from Japan from when the movie originally came out” Nightmare Before Christmas set that was actually a cheap knockoff that clearly said “made in China” and was in the wrong packaging? And not made by Jun Planning? May you never make a cent anywhere, ever, you fraud.  Lame.  (Nightmare stuff is becoming rare again, so I am not surprised, but still, lame. Don’t try to rip people off. It’s just not cool.)

What was very cool though, were the people in costumes.  They were clearly having a great time, including the World’s Most Polite Stormtrooper ™ who I thought was a statue and jumped when he moved. He apologized, even though the fact that I thought he was a statue meant his costume was absolutely flawless.  I got him to use the force on me for a photo. He said his force was weak.  Sweet guy.  We ran into some Jedi. A Jawa who definitely wanted to steal Steve’s wallet. Spider-Man and Black Cat. 750,000 Harley Quinns. R5-D4. Kitt the Car.  A Batmobile (which I wanted to steal myself, but I think they would have noticed.) 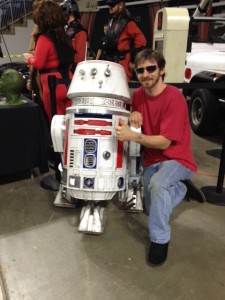 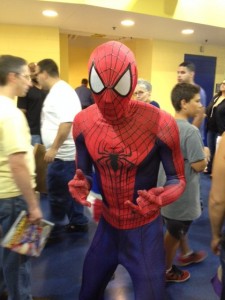 All in all? We didn’t spend a lot of money – mostly because we didn’t have it, but also because a lot of the vendors were definitely shooting over market value and, surprisingly for a Sunday, no one was open to some wiggle room on price. But we had fun and that’s really what matters. Would we do it again? Next weekend, if we could. Will we be there next year? You can be damned sure. Hopefully with more money in hand.