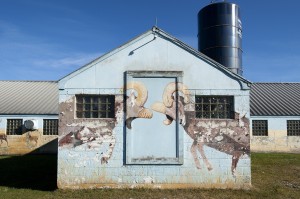 "Ram the Door" by Mark Savoia.

Press Release from The Mercurial.

The Mercurial Gallery in Danbury, Connecticut will be exhibiting ‘Still…’, a photography exhibition featuring Catherine Vanaria, Mark Savoia, and Lys Guillorn from September 15 to October 26 with an opening reception taking place on Saturday, September 22 from 5 to 7pm.  Vanaria and Savoia, a married couple who live in New Fairfield, are co-owners of Still River Editions and Connecticut Photographics, a studio and gallery specializing in fine art digital printing and traditional black and white film processing, and they are currently celebrating their 25th year in business.  Guillorn, who lived above The Mercurial from 2001 to 2009, has been working with Vanaria and Savoia at Still River Editions since 1998.

Vanaria, a professor of photography at Western Connecticut State University in Danbury and volunteer archives photographer at the Danbury Museum & Historical Society, has three pairs of large black and white prints on display at The Mercurial – intimate portraits of a mother and daughter, a mother and son, and two brothers, all taken with a 1930s era 8×10 large format camera and lens. 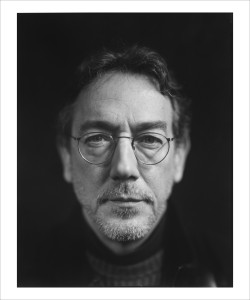 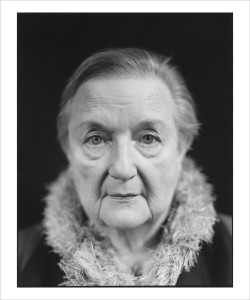 ‘This body is a departure from my original portrait work,” writes Vanaria in her artist statement.  “My traditional method demanded sharp focused, environmental locations mixing both available and strobe light.”

“I make the eyes the most important point in each frame, letting other sections fall out of focus. I believe that the eyes are our truth-meters.  They show our secrets, desires, wants and needs even if every other part of the face is displaying the opposite.”

Vanaria says he has been attracted to photographing the human face for 30 years.  She is also well-known for her series “The Boston Years”, which captures performances by bands such as the Talking Heads, Billy Idol, Joan Jett, and Anthrax from their heyday in the late 70s and early 80s.  “The Boston Years” is also available in book form on Vanaria’s website, cavanaria.com

Savoia, a master digital printmaker at Still River Editions, has been building his portfolio of smart and humorous photographs of “tongue-in-cheek” glimpses of New England Americana for the past six years. This body of work features almost impossibly ironic images where pops of color contrast with the familiar green-gray colors of the Northeast. Works such as “Park Your Cow Here” and “Wheel Chair Starting Line” are on view at The Mercurial.

“I am constantly looking for evidence that below the surface something is not quite right in this country,” Savoia writes in his artist statement.

“Through the camera’s selective view, I juxtapose what is considered progress in our throwaway society against an increasing lack of taste. I am not attempting two-dimensional slapstick, rather satire laced with a few Freudian slips.”

Savoia, who received an arts grant from the Connecticut Commission on Culture and Tourism in 2010, has shown his work throughout the country and has pieces in permanent collections in the United States and Japan. 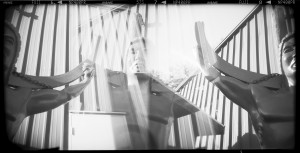 Guillorn is an artist of many kinds; in addition to her photography work, she is an avant-folk singer-songwriter and multi-instumentalist with three solo recordings under her belt.  She will be performing at The Mercurial prior to the closing of ‘Still…’ on Saturday, October 20 at 7pm.

Guillorn’s first group of black and white photographs from her “Route 34 Series” is on display at The Mercurial, featuring abstract triple exposures and seemingly ancient industrial landscapes, each captured with her plastic camera during her Route 34 commute between Shelton and Danbury.

“When I got married and moved to Shelton a few years ago, I was a little worried about the commute,” writes Guillorn in her artist statement.  “It turns out to be a beautiful drive. I have trod Route 34 in every type of weather, and never find it boring. I wind along the Housatonic River and watch the light change every day.”

Guillorn has shown work ranging from photography to sculpture throughout Connecticut and is also featured in “Brief Monuments”, a group photography show at the Orison Gallery in Essex, through October.

The opening reception for ‘Still…’ will include an artist meet and greet, food, and refreshments.  An Accompanying music performance by featured artist Lys Guillorn will take place at the gallery on Saturday, October 22 at 7pm.

The Mercurial Gallery is located at 11 Library Place in Danbury, Connecticut.  Regular gallery hours are Wednesday and Friday from 11am-5pm, Saturday from 1-5pm, and Sunday from 1-4pm.

Parking is available directly across the street from the gallery in the Charles A. Bardo Parking Garage.  Main Street parking is free on Sundays and after 5:30pm.