On a beautiful sunny day near the end of October I walked into the woods behind Cove Island Park with my binoculars and camera, ready to take pictures of birds and other wildlife. This is my thing. It has been for almost four years. When out and about with my camera I am in my happy place. That zen like state that we all seek to find when all we are living in is the moment. Focused on the sights and sounds, the faintest rustling of leaves and the farthest echos of screeching predators. All my worries slip away as my entire being shifts into the natural world. The only world that really matters.

I slowly walk through the woods, making as little noise as possible. This is migration season, when the birds I knew all summer fly south and the birds I saw last spring fly through again towards their wintering grounds. As I walk the trails I can remember the exact spot I saw that Prairie Warbler last April. I know the habitat that the Common Yellowthroat is likely to be in. I have fond memories of my private session with the Painted Bunting on that little rise in the trail where I also took photos of a Garter Snake sunning itself only a few short months ago. I know these woods pretty well.

I make my way to the Wildlife Preserve, which used to be the stump dump but is now one of Stamford’s best kept secrets. Trails lined with native plants and grasses, a few bird feeders and a butterfly garden, the Wildlife Preserve is home to foxes, turkeys, deer, countless birds and I’ve even seen a coyote there. Briefly. It turned and ran as soon as it saw me. The next day the coyote had left me a pile of poop in the very spot I spotted him. “This is my place, bitch,” said with scat.

As I walked the trail I saw one birder, then two, then five and a huge ladder. “Oh, no,” I muttered to myself. “Not again.” I walked up as slowly as I could and asked what was going on. Apparently there was a Le Conte’s Sparrow in the tall grasses. Only the fourth sighting in the state. I stood there watching the grass, looking for any sign of movement, for about 20 minutes. Then the number of birders started increasing. Word had gotten out via listservs, texts, calls and social media. Birders from all over descended on the area. They had binoculars and scopes and camera lenses the size of my thigh. Some of them stood on the trail, some walked into the tall grass, some climbed rock formations and one talked on his cell phone and stood right in front of me. That was my cue to leave.

I walked away muttering to myself and tried to find a better vantage point. As I remind myself all the time, people don’t become birders because of their impeccable social skills. I got into this to have alone time with nature. Birding in groups is, well, for the birds.

I found a nice spot and stood there for over an hour. I never got to see that Le Conte’s Sparrow, but I did get to see a Nashville Warbler. And better yet, I was alone. Away from the now dozens of birders standing around on trails, rocks and ladders waiting to get a shot of that damn sparrow. They got their shot eventually. Five hours later. By then I had gone home, eaten lunch and showered. When I arrived back at the preserve the birders were finally leaving. They had gotten the Le Conte’s. But I smelled better.

Jessie May, of Alternative Control fame, had stumbled upon me during this irruption of birders. She must have seen the veins throbbing in my head. She suggested I write a rant about birding. But birding is so much more than something to rant about. So I’ve decided to write a three part series in true Alternative Control fashion. Part one will focus on Places to Go. Part two will be my Birding Rant and part three will showcase my birding fashion.

I hope to inspire some of you to try birding. Just leave me the fuck alone when you see me. Just kidding. Not really.

Birding is So Metal, Part I: Finding the Scene

On a cold foggy winter morning four years ago I was walking my dog Apollo on the beach at Cove Island Park. I heard some strange sounds and looked out towards the water. I could see some geese through the fog. I couldn’t really see them, actually, I could just see their silhouettes. The sounds they made were oddly soothing and haunting as they came closer into view. But the silhouettes never gave way to a full view. All I saw was a black neck, head and bill. Their bodies were a mix of white and black, but where were the classic Canada Goose markings on the head? That’s when I realized. I had just discovered a new kind of goose.

I rushed home and Googled “black headed goose” and before I knew it my goose had a name. Brant Goose. Apparently I wasn’t the first to discover them, disheartening for sure, but what I really discovered was a whole new world. A world with migrating geese and ducks and herons and birds of all shapes and sizes. Discovering Brant Geese lit a fire in me that has not yet been squelched. In fact, every bird I see adds another tinder, another branch, another log to the fire. 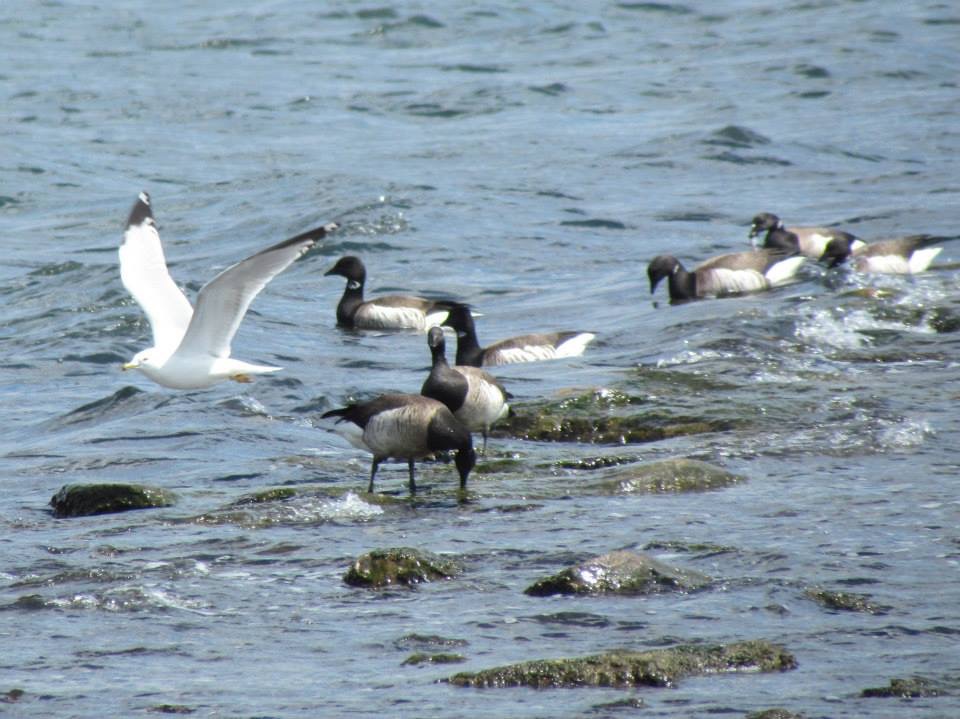 Brant Geese and a Ring-billed Gull at Cove Island Park

In Stamford there is no place that will give you more bang for your buck than Cove Island and Holly Pond. With a variety of habitats, from woods to open water, you’re guaranteed to see some serious birds. In fact, Cove Island has had 305 species visit at one point or another. Start off in the Wildlife Preserve where you’ll see numerous songbirds (unless there’s a hawk, then you might see bupkis), go through the woods behind the ice rink and you’ll find thrushes and woodpeckers, go into the park proper and you’ll find ducks, geese, seagulls and other shorebirds. Walk out and along Weed Avenue and you’ll find herons, egrets and even more seagulls. Winter is actually a great time for ducks around here, so don’t let the cold stop you. Bundle up and get out there.

Birding in Darien can be difficult. I spent many hours at Woodland Park in Darien, and I’ve seen quite a few birds there. Foot traffic has unfortunately impacted the biodiversity of the place and it is overflowing with off-leash dogs. Selleck’s Woods and Dunlop Lake suffer the same issues but not as much. The variety of habitat makes it easier to overlook a loose dog or a train going through. Yes, a train. And it’s also behind the I-95 rest stop. It’s actually a pretty loud place, but somehow I’ve hit birding gold there a few times. 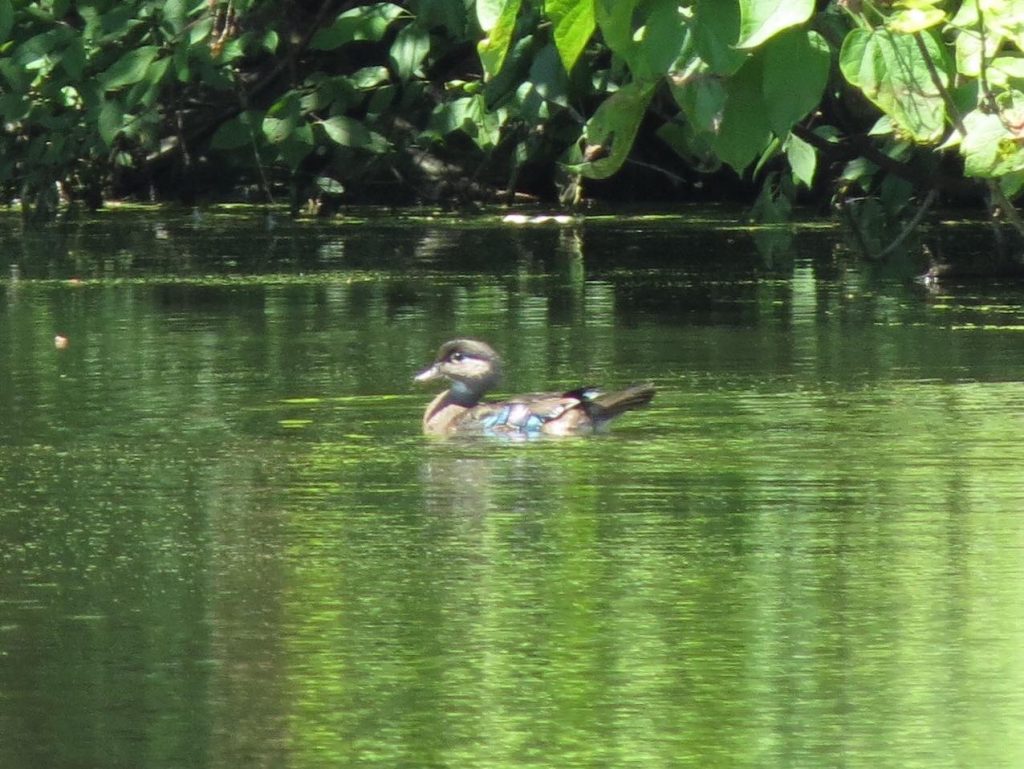 The Selleck’s Woods section of the park is mostly trails and some wetlands. Depending on the time of year you can be in for flocks of American Robins or screaming Blue Jays. During migration season you can see just about anything. This past spring I saw a Prothonotary Warbler (more on that later) and my first Rose-breasted Grosbeak. The Dunlop Lake portion of the park is where the real action is. You can bet on herons, ducks and cormorants being there along with loads of turtles. I’ve even seen muskrats and an otter there.

The property actually joins up with some other Darien Land Trust trails and, despite it being behind the highway rest stop, you can count on being safe there. There is no access to the park from the highway, so truck driving serial killers aren’t on the prowl.

I’ve only been to Sherwood Island a handful of times, but my last visit netted me three new birds for my life list. The place is huge and I haven’t come close to exploring it in its entirety. Like Cove Island there are multiple habitats. Grassland, brush, woods and of course beach. The water is far more open, which may be why the ebird checklist is so impressive. There are plenty of birds that thrive over open water and Sherwood Island is a great place to see them. 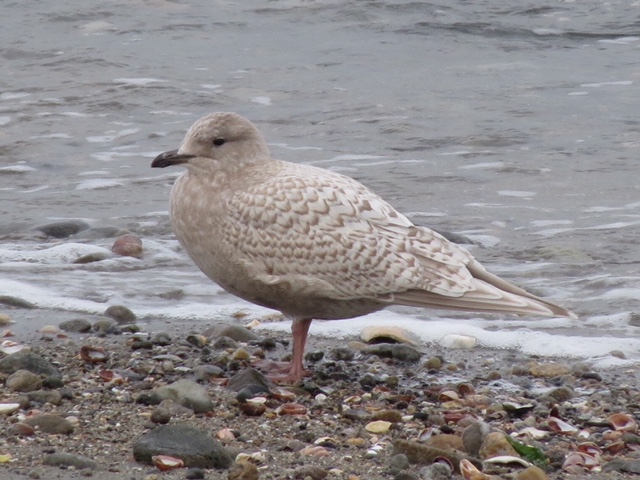 It is a bit of a hike, and it’s ten dollars to get in most of the time, but Ward Pound Ridge is my go to when I’m looking for a birding roadtrip. With 4,000 acres at Ward you should pack a lunch and maybe a dinner. I’ve had my best luck along the road that runs through the park. I got my first lifer there. A lifer is a bird you’ve been waiting to see your whole life. And granted I’d only been birding for about three years, but I was beyond thrilled when I finally got to see Eastern Bluebirds in action. Breathtakingly beautiful in their simplicity, I’ve only seen them twice now. Both times at Ward. I also added a Common Raven and a Vesper Sparrow to my list while at Ward. And while you’re there go for a hike. You may see a woodpecker and you’ll definitely get a workout. 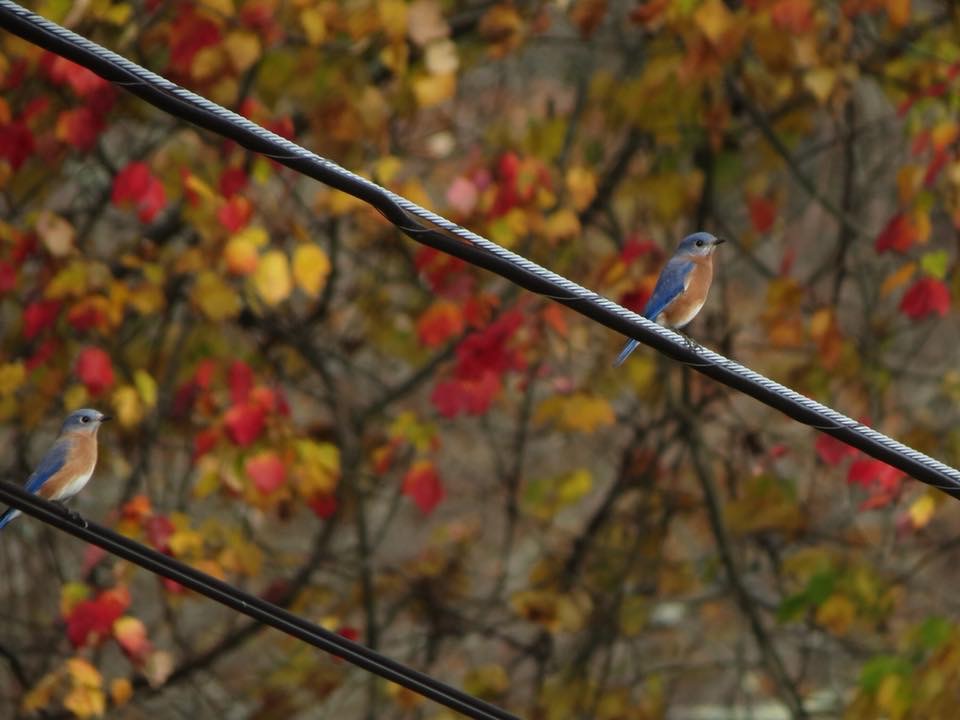 Sometimes Bartlett is too busy for birding. Lots of folks go there on the weekends and you will run into an off-leash dog or two. Actually I’ve even run into a few nuns on those trails. You can make a nice loop through the gardens, up to Scofield School, back through the Arboretum woods to the wetland walk and down past the pond to cross over Brookdale Road into the Stamford Museum and Nature Center woods. I’ve seen Wood Ducks, my first Pileated Woodpecker and a pair of hawks making more hawks if you know what I mean. I’ve also run into a few deer and foxes on the trails. It’s a good spot and a great excuse to hit Trader Joe’s on the way home. I mean, you’re already up there. Might as well spend thirty bucks on hipster junk food. 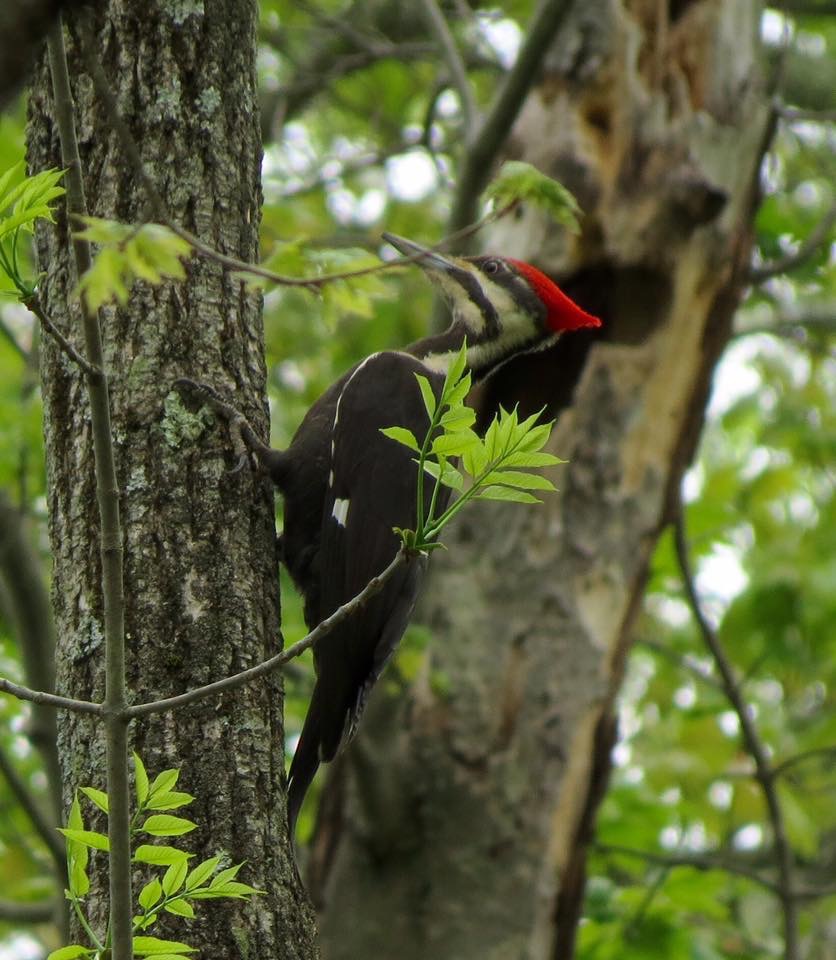 I could go on and on about places to go birding. Check out my previous articles on Kosciuszko Park and Scalzi Riverwalk. Birds are everywhere, you just need to take the time to look.