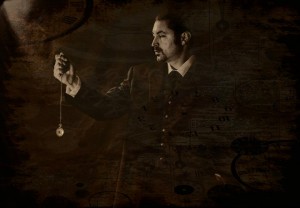 On October 17th, 2012, the chalkboard outside of Anna Liffey’s Pub in New Haven said “Magic Show.” I’m certain that some of those attending expected sword-swallowing or rabbits out of hats or women sawed in half. Without a doubt, the impression given by the sharp-dressed man and his young lady counterpart might have inspired visions of doves appearing from his sleeves, or coins mysteriously appearing behind your ears. An older woman in attendance even declaimed, during one of several intermissions, “Aren’t you a magician?” But this Extra-Sensory Performance had nothing to do with illusion or parlor tricks. It was without a doubt an impressive display of mental prowess. And perhaps, if you’re willing to believe, it was an exhibition of supernatural/psychic abilities, by a young man and younger woman who performed inexplicable acts for a capacity crowd.

It started with eerie emanations… from the PA. Which Keith Zalinger, his lovely assistant Natalie, and the emcee of the occasion (whose name I’m afraid escaped my diligent note-taking) took in stride. Everyone involved, especially said master of ceremonies, had a sense of humor that eased the audience and removed any pretension from the proceedings. It was explained that the show centered on powers of the mind, the ability to glean thoughts from those around and decipher them, to filter through colors and emotions and determine meaning. Bad ass.

Zalinger himself started off, simply but convincingly. He included random audience members in every action, something that not only made it more personal but also made it impossible to accuse him of collusion. The entire joint can’t be in on it, can they? In the very first display, Keith had an audience member draw a shape and place it in an envelope; as the emcee held it shut, Zalinger correctly guessed a circle. So far so good! There was a long 2-person card trick that went swimmingly. Not everything was so seamless; in a mere two instances Zalinger was mistaken. The fact that he wasn’t flawless, however, was perfect. It passively proved a humility and limitation that endeared the audience and substantiated his claims even further. Even a mind-reader can’t read minds EVERY time, right? 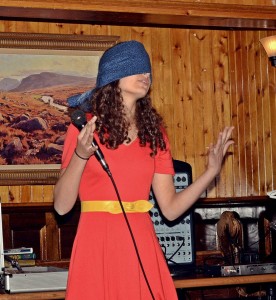 Next was Natalie. Zalinger acted as emcee for her performance, beaming that her abilities might put him out of a job. She donned a blindfold early and wore it throughout. He had an audience member take a dollar bill out of their own wallet and hand it to someone at another table; both seemed genuinely surprised. He asked the guest to concentrate on the year, which Natalie quickly and accurately guessed. Impressive! But wait… asking this individual to concentrate on the serial number, she slowly and deliberately waded through the feelings and impressions she was getting and guessed… Every. Single. Number. Tough enough to memorize if you try, impossible to guess at random. Very impressive.

Another of her most extraordinary displays was gauging the color of a wiffle ball picked blindly by a random audience member, by hearing it bounce on the floor. She guessed the first two spot on. I was one of those chosen to pick, and took green, and dropped it. “I feel a sense of sadness, I see the sky… is it blue?” I was asked to drop it again. “I feel a warmth now, a pleasing brightness. Is it yellow?” And of course, blue and yellow make green, as I said into the microphone. But unconvinced, Zallinger had me take another. This gave me the opportunity to see first hand that they weren’t all different sizes, she didn’t have the advantage of knowing which colors were bigger or smaller, there wasn’t something rattling in some of them, which would sound differently upon hitting the ground. As a casual watcher I had insight into the fact that this trick was not in any way rigged. I pulled red second, and she guessed it on the first try.

Natalie’s successes continued. She beat a child in the audience at tic tac toe… blindfolded, and with the chalk board turned away from her besides. An old cynical crone in the audience wouldn’t let Zalinger see the card she’d drawn at random after much shuffling, wouldn’t even show it to the audience, despite Keith’s earnest efforts to let everyone in on it. Natalie coolly considered what she read from thin air, and correctly guessed the 5 of spades, which floored the curmudgeon. Then a lengthy game using the entire audience to connect numbers and items turned out in her favor as well. It could be passed off as a memory exercise, aside from the fact that the order was random. And she mispronounced things and even offered models of cars or guitars that hadn’t been said aloud, as if she were reading unfamiliar words from the minds of those who’d written them! During an intermission, as a table of skeptics left in a huff, the girl who had been blindfolded the entire time accurately described their jewelry, hairstyles, and even their underwear! 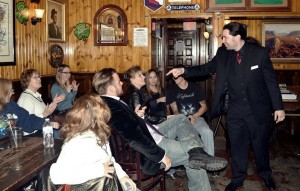 In the closing segment, the master of ceremonies collected random items from audience members and Zalinger followed their energies to the owners. He missed the mark once, yes. And once, an old woman cold-faced denied that an item was hers. He gave up, scandalized, only to discover that it had been hers!

I was fortunate enough to be a part of the last display, and the only word for it is astounding. The bartender, who’d been doing her best but was admittedly overwhelmed by serving the capacity crowd by herself, was in no position to be part of a fix. Keith asked her to get the letter he’d sent directly to the venue in the week prior, and she got it from the bar’s manager. The seal was unbroken, and it was postmarked, having arrived several days beforehand. He claimed to have written the contents even earlier, in a Hemingway-inspired drunken fervor, tapping into energies the sober mind would disregard. Within this were three other sealed envelopes, each containing a handwritten note.  He gave each to an audience member, myself included. A newspaper was produced from that very day, Oct. 17th, and handed to an audience member.

The first note, dated September 25th, 2012, claimed the last word on the front page of October 17th’s newspaper would be ‘stories.’  It was. Another had a direct allusion to the debates as the headline, and was accurate as well. Mine said: 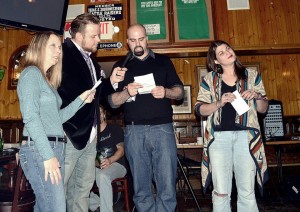 Lo and behold, the picture at center on the front page was two men with an unfolded map, and the caption said something to the degree of Connecticut being as susceptible to a giant earthquake as California. Even Zalinger’s fiancée was floored, an almost unbelievable achievement, had I not seen the unbroken seals and United States postmark myself.

I entered willing to believe but needing to be convinced, sitting with two outright skeptics. The room was rife with cynicism and rudeness from a clutch of sour attendees, who even as they left were forced to acknowledge that something amazing was happening. It cannot be denied that what Keith Zalinger and his partner Natalie accomplish with their performance is impressive and inexplicable. Unless you choose the offered explanation, which is as good as any: the powers of the mind that many can’t or won’t access are employed by some to create surreal and enigmatic occurrences.