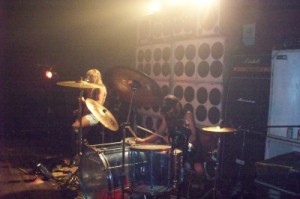 Jucifer playing at the Heirloom, July 2011.

Editor’s Note: This article is completely biased and includes every conflict of interest imaginable.  U mad, bro?

I recently found an article I wrote for WCSU’s student newspaper in 2007, titled something along the lines of “Summer Metal Update” — and with everything that’s going on in the scene these days, I think it’s time for Alternative Control to have a summer metal update of our own.  So, here goes…

If you don’t live under a rock, you probably already know that the Heirloom Arts Theater was shut down over the weekend.  (See Mercurial coverage and News-Times coverage.)  In a joint effort by the Danbury police and zoning departments, cops cleared out Saturday night’s art show — and supposedly arrested some people, either for underage drinking or for serving minors.  This is unconfirmed by the News-Times police blotter as of 12:35 p.m. today, but Danbury mayor Mark Boughton tweeted about an hour ago that the police will be releasing a press statement this afternoon.  (Yes, this is how we get our information….)

Obviously, this shut-down is bad news and a lot of people think something fishy is going on.  Hopefully the Heirloom will be allowed to get an appropriate kind of liquor permit and reopen, pending the outcome of an upcoming zoning hearing…. Because otherwise, where the hell is there to go in Danbury anymore? 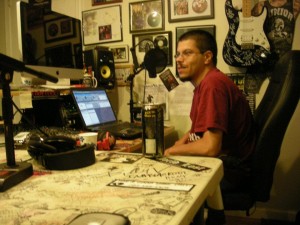 Fingers crossed… But now on to something more positive: Official FN Radio is continuing their pledge drive until the end of June.  They’ve raised over $1000 to go towards licensing, streaming charges, and merch — but the more they can raise, the better.  Also, they will be donating half the proceeds from this extension to the Fender Music Foundation.  Why should you send OFNR money?  Because they actually give a crap about local music.  They will play YOUR BAND.  They will interview YOUR BAND.  They might even go to YOUR SHOW and broadcast it live on the air.  See the Facebook event for more details and prizes for donating, or visit their site, scroll down, and click the “Donate” button.  Not rocket science. 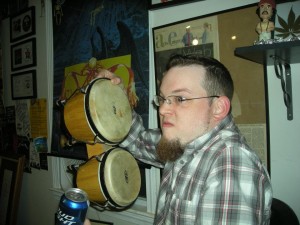 Jim Clegg of Pink Missile to Bagman and Knob: "I told you, I don't KNOW what our band name means!"

Speaking of your band getting interviewed by OFNR, Pink Missile is doing pretty darn well.  (*cough* That’s my band. *cough*)  Guitarist Rob Diroma has left, so we’re now rocking on as a trio.  We got our feet wet at Station Eats and Toad’s Place earlier this month, and we’re looking forward to a couple good shows that are coming up.  Left in the Attic is joining us at East Side Cafe in Norwalk on Friday 6/22; then we have a little hiatus, and a show 8/18 at Fiddler’s Green with No Remission and Eyes of the Dead.  For the fall, who knows?  In the meantime, we encourage you to check out Rob’s new band Hell & Back — they’re killing it!

Pink Missile and Hell & Back are going to have company down here in Stamford soon…  You might have heard that Johnny Pluckman recently joined No Remission on bass, but that’s not all he has going on.  His former Arcane Malevolence bandmate Mike Devaney (*cough*) has started a melodic metal project called Lyra, and Pluckman is doing bass duties there as well.  Expect to see Lyra playing out in late summer or the fall — and let’s just say that Beard and Devaney won’t be the only familiar faces on stage.  Oooooo….

I think that covers all my genuine conflicts of interest — but that’s definitely not all that’s going on with local metal in Connecticut this summer.  The day after Pink Missile and LITA’s super awesome rock n roll show, Priapism is releasing their new album Prey, Pay, Obey.  The party is at Cherry Street Station; Eyes of the Dead, Sinners, When Waters Rise, Mouth on Tailpipe, and Oath of Insanity will join Priapism on the bill.  Mayhem Fest is rolling into town 8/5, with many locals singing up for “Battle for Mayhem” competitions.  One is at Toad’s 7/6, featuring Nasty Disaster, Lightsbane, Kali Ma, and many more; there’s another “battle” 7/13 at the Webster.  Regardless of what you think of the Mayhem lineup or band contests, these “battles” should make for some pretty good — and jam-packed — metal shows.

For all your jam-packed-metal-show needs, check Alternative Control’s show listings… And if you’re playing a show, send your listing to us.  Who knows, we might even get Death Metal Dave down there to do a review — as long as you don’t stink on ice!

And certainly this article isn’t an extensive report on every single metal thing that’s going on — even as I’m about to click “Publish,” I’m thinking of more shows and bands that should be in here.  (OMG, Skeletonwitch 7/15 with Barn Burner, Indamnum, Oath of Insanity…  Okay, I have to cut myself off.)  If you have some metal thing that you want Alternative Control to cover, shoot us an email and we’ll see if we can help you out!