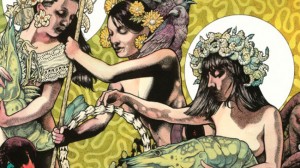 I’m all for an artist being open to progression. I stand firm to the notion that anyone has the right to pursue their own artistic experimentation, no matter what their followers may say about it. Playing it safe means eventually becoming stagnant and predictable, it’s inevitable. I suppose there are a few who actually enjoy when a band makes the same album over and over, and I can’t really discredit their opinion. But for me, I need to feel like the creator is taking me somewhere. I like to think that I’m following right along, being taken deeper and deeper into the story as each chapter (or album), digs deeper into the creative mind of the composer. In a way, the challenge of opening my mind up to unconventional twists in the story mirrors the challenge the artist faces when exploring his/her own potential.

What bothers me the most about this release is the fact that Baroness abandoned, for the most part, the strongest aspect of their sound: their instrumental prowess. Gone are the long, inspired suites of music that took songs like “The Birthing” and “A Horse Called Golgotha” to incredibly dramatic and soaring heights. True, there are moments of instrumental glory here, especially in the songs “Eula” and “Green Theme.” But for the most part, what we have here is a vast selection of basic, traditional pop rock songs. Now I’m not saying the pop formula is a terrible thing for music; still, I can’t help but feel that Baroness’s decision to cut back the adventurousness of their songwriting downplays their compositional skills. On top of this, the songs here are not that memorable in their hooks, a big blow to the validity of this kind of music.

Perhaps I would have been more welcome to the more vocal approach to this album if the singing was a lot better. I have to say, Baizley is not a great vocalist. I get the sense that he doesn’t understand the limitations of his vocal abilities. He sings and bellows out on this album as if he has a perfect three-octave range…and he just doesn’t. In the past, he smartly kept his singing to a minimum, allowing for the quality of the music to shine through. His occasional bursts of gruff screaming actually fit as an aggressive accent on top of the intricacies of their proggish songwriting. But here, he tries to push his voice to the center stage. It doesn’t work for me, and gets in the way of my enjoyment of the music underneath. On the flipside however, the actual lyrics are quite inspired and some of the band’s best work. Perhaps he should have gotten Mikeal Akerfeldt to sing them for him.

A lot of the problem here too is the fact that there’s just too much music. I’m a fan of many double albums, don’t get me wrong. But really, this could have easily been trimmed down to a fairly solid single album. Much of the second disc, “Green,” could have been left off completely. The trio of songs from track 3 to 5 just drag along in directionless, melodic noodling. It’s not until the song “Stretchmarker” that things start to pick up again, but by that time it’s too late. If Baroness wanted to make a solid double album kind of statement, they really should have brought back some of the long and inspired instrumental sections I previously mentioned, just to kill some time with some exciting composition. Instead, I’m bored and the filling I’m forced to eat is pretty bland.

Despite what I’ve said, there are some shining moments here. The solo in “Eula” is just orgasmic, the transition from “Twinkler” into “Cocainium” pulls at my tender Floydian heart, and “Board up the House” is just a really fun song. Despite my issues with the music, the band still holds a tremendous amount of musical talent, and this is still evident even though the songwriting comes off as sophomoric. The production is also practically perfect and the cover art is extraordinary as usual. I just wish that the complexity of the music matched the intricate detail of the artwork this time around. O well, considering the crazy amount of great albums this year, I shouldn’t complain too much about one product not living up to the hype. I’ll still lend my ear to whatever this band does in the future. I just hope that they further their progression with respect to their many strengths, not their few weaknesses.