Alternative Control closed our week of interviews by chatting with Agrippa, one of the founders of the Metal Cyndicate of Connecticut.  What began as a public access TV show has, through Agrippa’s dedicated shaping, grown into a huge presence in the Connecticut metal scene.  He and Alan Selavka host weekly podcasts with local bands, photograph shows, and even book the occasional concert to showcase what our state’s musicians have to offer.  One such concert is coming up — Diversity Metal Fest at City Limits (Waterbury/Thomaston line) on Saturday, September 5th.  Check out what Agrippa has to say about that show and much more:

The Origins
(Metal Cyndicate) started in 2010 or maybe a little bit earlier with Cynthia Freeman and at the time, her husband, they started this thing called Metal Cyndicate TV. It was a public access TV show; for one hour a week, they’d have bands come on and they’d play live… It was a great opportunity for local bands. Agrippa93, which is my band, we were on there I think three times and I noticed that they didn’t really have a website. I was working with Cynthia and she said, “Would you be able to make us a website to host all our videos on?” And I said, “Sure, I could do that.”

So I started to build a website, and I’m thinking to myself, “This needs to be more than just videos.” […] What would I want in a website like this? I would want a list of Connecticut metal bands, […] their contacts, samples of their music… So that’s where it started, and then I started to write some articles. Then Cynthia moved down south and said, “Y’know what? Metal Cyndicate of Connecticut is yours.” And it branched off from there! 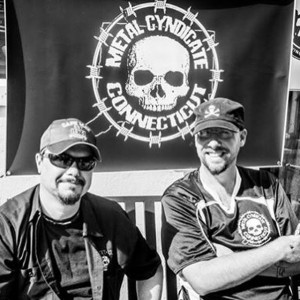 The Scene
I came in kind of as an outsider. […] When I first doing shows and started networking with people, I didn’t know a lot of people. One of the first groups I got in contact with was Shallow Ground because Agrippa93 did a show (with them) at the Webster — and if you ever wanna get friendly with a band, that’s the band to do it with. They’ll do anything for you. They’ll help you out, they’ll stick their neck out for you, and they did for us…

Looking back then and seeing it now from being inside the scene, it’s a community. You can walk into any club in Connecticut that has metal and you’ll know 85-90% of the people. It’s that sense of camaraderie that’s incredible.

The Show
Every year, (Alan and I) wanna make it bigger and better. […] This year for the lineup, it was really hard to decide what genres to pick from and what bands to represent each particular genre…

This year we have Insano Vision on — really great band, they represent that stoner metal genre. Walter’s an incredible guy, the drummer for Insano Vision, and all the guys in the band go out and support — so we really wanted get them some more exposure and put them on the bill.

Fear the Masses, they’ve been on the bill every single year. They’re a staple. Great guys, again, Doug has played guitar for me in the past…

My band Agrippa93 — I think I’m the only industrial metal representative of Connecticut, which could be good and bad. We kinda corner the market on that.

Shallow Ground — of course, those guys have always helped me in the past. To me, those guys are the kings of Connecticut thrash metal, so it was a no brainer to put them on the bill. (And they’ve been on the bill every year, too.)

In the Red — great bunch of guys, great musicians.

This year when I was at Knuckleheads, I saw Entierro for the first time live and I was completely blown away by them, so I really wanted to give them a spot on the bill. […] I gave them a good set time and I’m hoping that people walk away being fans of this band.

And new to the lineup — we had to replace Crossing Rubicon because they had some personal issues — Demon’s Past, representing the melodic metal genre… 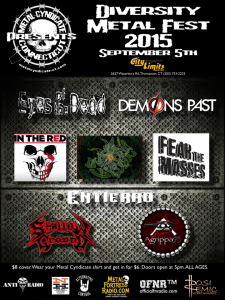 That’s not all we talked about — but if you want to hear the rest, you’ll have to listen!  Here’s what you need to know about Diversity Metal Fest: