In a world where rock music has devolved into coiffed dudes with tribal armbands crying about their girlfriends, Valient Thorr is a blast of Thin-Lizzy-Lynyrd-Skynyrd-Motorhead kick-ass telling those dudes to wake the hell up. 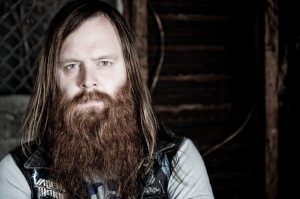 Valient Himself (Courtesy of Volcom Entertainment)

Since their Venusian spacecraft crashed in North Carolina in the early 2000s, they’ve been bringing true rock n roll to Earthlings almost nonstop – and this online media empire just found out about them.  Alternative Control spoke with singer Valient Himself on February 23, a week before the band kicks off a tour with Corrosion of Conformity, Torche, and A Storm of Light.

“Venus was just a shitty place to live,” Himself explained.  “We were looking for really good real estate somewhere else, and heard that the dinosaurs had died out…”  Due to the crash landing and some unfortunate meddling by Walt Disney, the band members were forced to become permanent Earth residents, and soon realized that there were malevolent forces at work here.

“We were like, ‘Hold up — there’s people trying to destroy this Earth!’” said Himself.  The band resolved to fight these forces with rock music, combining killer old-school riffs with socially conscious lyrics.  A good example of this is “Exit Strategy” off 2006’s Legend of the World:

They sent your son with a plan,
To fight some war in a desert land,
He ain’t gonna come home again
He’s makin’ some money for a Texas man

Can you guess what the song’s about?

Valient Thorr isn’t just a bunch of interplanetary hipsters, though.  According to Himself, “We want to help people in the long run.  We do charity work for the American Kidney Foundation, MS, breast cancer…  We hope that people see this, and that it raises awareness.”

Himself has certainly put his money where his mouth is, donating a kidney to his Earth father in 2008.  (Would that be better described as putting your money where your kidney is?)  “It worked,” he said.  “People don’t know you can live with just one, but it’s something you can do.  I did it, and I go hard every day.”

You can see Himself and the rest of the band go hard at the Gramercy on Thursday 3/1; they’re releasing a split 7-inch with High On Fire that day as well.  If you haven’t listened to Valient Thorr and want to check out their music, Himself says, “Start at the end and go backwards.”

Upcoming Shows (From Their Site):