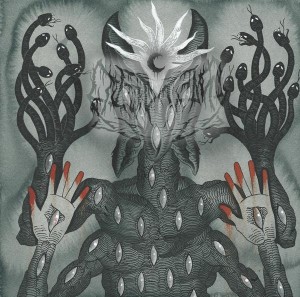 Black metal is the metal genre I’d have to pick as my favorite. Despite the strict parameters it’s based on, recent bands have taken the sound into strange and artistic territory. It’s no longer always about Satan, Tolkien and teenage rebellion. And production values have greatly improved since the early 90s. But when a modern metal outfit chooses to embrace black metal roots of the Satanic sound, the results don’t always have to be laughably trite and teenage. With the right amount of sincerity and experimentation, the genre can be evilly suffocating, grandiose and absolutely awe-inspiring.

One man black metal group Leviathan has created one hell of a traditionalist soup of experimentation with Scar Sighted. It’s a record that bows to original black metal ideas of nihilism, theological Satanism, and suicidal depression. Yet Wrest (Leviathan’s sole member) expresses these ideas in the biggest, grandest fashion. The record howls – absolutely screams with echo, delay, noise, volume and crushing weight. The experience on headphones practically chokes me with its insidious onslaught. And the mood is nothing short of agonizing. It’s a record that documents how abysmal waves of hopelessness fester into transcendental pain. And for me, I can split the void into three distinct sections of music.

Section 1: (Intro to Gardens of Coprolite)

The opening of the album is angrier, tremendously aggressive and mad. It’s the part of the album that feels most human. I’m not basing this analysis off of any of the lyrics. This just SOUNDS like a dying man on the fringes of hell, expressing his pride over a lifetime of inflicting violence, mutilation and the suffering of loved ones. And he’s ready to embrace hell because of it. The songs here have almost a death metal quality. There are deep guttural vocals, grinding serpentine riffs and a thunderous dark ambience.

Section 2: (Wicked Fields of Calm to A Veil is Lifted)

The middle of the album is more melodic and epic. I get distinct visions of charred hellscapes and the blizzardy winter winds in the chasms of the afterlife. The protagonist of the album has died, been lowered into hell and is taking in the scenery of his eternity. Through the absolute darkness, his spirit visualizes perfectly the fiery sinkholes that pepper the coal-black valleys and the cloud cover overhead that pulsates with the threat of vomiting blood. And in the music here, bits of beautiful melody cast light on the emotional state of the protagonist. He finds immense beauty in the wastelands around him.

The last part of the album is the softest and most transcendent. There are still moments of aggression, but a ghostly ambience lies like a sheet over the music. The pace is slow, and long drawn out screams grow into massive waves of trebly distortion. The protagonist has reached a transcendental state of pain and misery in which he may rest for eternity. The music is a reflection of this higher consciousness. No doubt these last three songs are the most experimental on the album. Dissonant melody, large plumes of atmospheric riffs and ethereal screaming choirs drone on until the album’s end. It’s absolutely glorious.

All in all, this is one of my favorite releases of the year so far. And as far as black metal goes, this is just about as good as it gets. I can easily put Leviathan on par with bands like Blut Aus Mord, Deathspell Omega, Emperor and Wolves in the Throne Room.