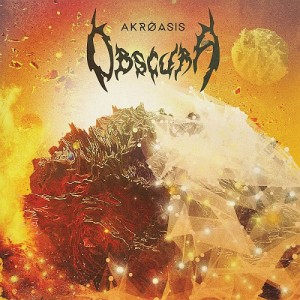 I’m a bit stubborn when other people suggest music for me to listen to. I’d rather do the research myself instead of trusting someone else’s opinion. I don’t really know why I have this attitude. Maybe it’s because the experience of finding great music on my own is more rewarding. But there’s a risk to choosing bands and albums at random to invest my time and money in. Some of those times I get royally burned.

So I guess it’s time for me to start listening to other people. I had heard about Obscura for a while before deciding to give them the time of day. I didn’t really believe they could be anything special – just another boring tech metal band. Well I finally stopped being stubborn and gave their new album Akroasis a spin. I have to start listening to my friends more…

I’ve heard that despite this album’s excellence, this is Obscura just going through the motions. Perhaps there’s not a whole lot a seasoned fan can say about this that hasn’t been said about previous albums. But this being my first real exposure to the band, I’ve been given the gift of a fresh set of ears. This is quite possibly the best metal album I’ve heard in months. And it’s not because the band members can play their instruments well. Being a technical progressive death metal band, that’s to be expected. It’s because of their uncanny ability to unify a diverse set of ideas.

Obscura is a dynamic band. They incorporate everything from the most guttural death metal moments to momentary breaks of folksy and jazzy acoustics. They take liberties with their technical prowess but understand the fulfillment in a well-placed melodic transition. They have a penchant for the unexpected, but (at least for the most part) remember that continuity is important. This album explores a topographically diverse musical field, but doesn’t get lost in the temptation to be wild and zany for the sake of it. Each song gradually unfolds each new musical idea seamlessly into its foundation. This is further supported by an expertly crafted mix. Every instrument finds a cozy place in the prog metal soup.

Akroasis is like a complicated adventure narrative through music. In my mind, it tells a dark, beautiful story about astronomical evil. I can imagine listening to tales of a hero on an alien desert planet with comic book styled action told through a hard sci-fi narrative. He fights tentacle cave creatures through death metal frenzy, contemplates the suicidal risks of his mission in melancholic moments and calculates out the soothsayer’s mathematical puzzle within the album’s technically perplexing highs. Hell, even the lead solos sound like the bubbling of green liquid filled flasks of alien embryos, or the melodious sequence of spaceship control panel noises. The album offers a tremendous amount of imagination; you just have to let it take you there.

If I have any complaints, it pertains to the last epic track “Weltseele”. Despite having many briefly inspired moments, I don’t think it holds up as well as the other songs here. It sounds too disjointed and thrown together, like the band just dumped a bunch of unused ideas into one fifteen minute medley. I would have liked if the band broke it up into two separate tracks and dumped some of the pseudo-symphonic stuff entirely. It loses direction in its yearning to be epically weird.

Epic song fail aside, this is without a doubt some of the best extreme progressive metal I’ve heard. This being my first exposure to the band, I’ll have to check out the back catalogue for more. And yeah, I’ve learned that taking notes on musical recommendations isn’t a bad thing. I should be so lucky to befriend people that still even give a shit about new and exciting music in their 30s. Normally, we should probably just be listening to classic rock radio for the company while we try to fix our kitchen sinks.