CT doom metallers Mourn the Light took an eight-show jaunt to SXSW and back earlier this month.  Here’s guitarist Dwayne Eldredge’s words from the road…

Kickoff show for the tour with our local friends Casting Shadows, Sentinel Hill, and Hellitosis. This was a fun, laid back local show with friends and a nice Thursday night crowd to get us ready for the road ahead…. Thanks to all our friends who showed their support.

We arrived in Wilmington for our second night of tour, first out of state on the run… We were pretty impressed with the unique look and the nice size of BAR XIII: their logo painted on a side wall, nice sized stage, and a nice room with a great view anywhere you are.   There was also a lounge area with artwork and a table with octopus tentacles busting out of it, and the entry room had a large square bar centered in the room. 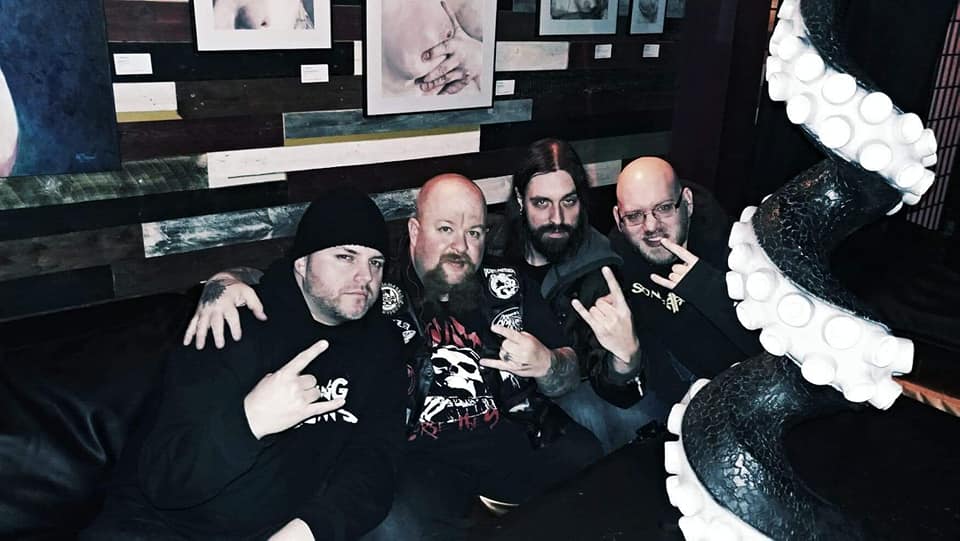 Chillin’ with the octopus….

We were first up this night and we had a nice crowd early.  The sound on stage was nice and overall in the room; our sound guy John was quite a character and he did a great job. William Miller of The Age of Truth put together a wonderful show and he was quite the host. We were joined on this bill by Bill’s band The Age of Truth, Kingsnake, and Wasted Theory. Each band crushed and anyone familiar with those bands knows that they deliver every damn time… Those who don’t know, need to get in the know…NOW! On to Maple Heights, Ohio… 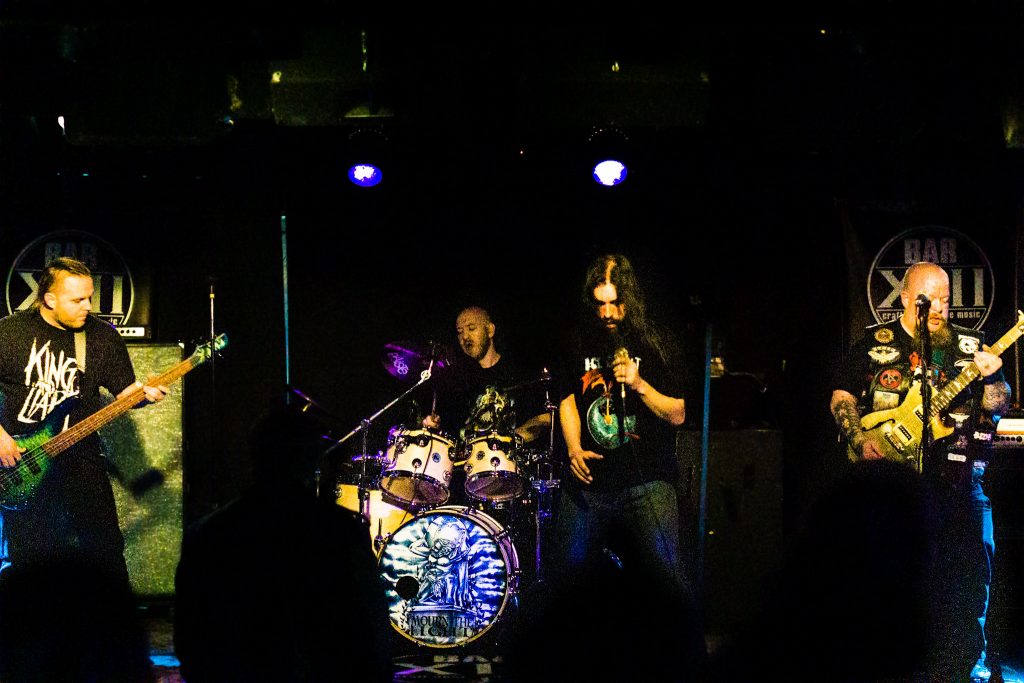 First impression is that this club is in a quiet area and not too much going on near it. We arrived early and had time to go get some dinner; we found this little takeout only BBQ place down the road, very hospitable locals with AMAZING food… This is a great start. Plenty of room to maneuver the trailer and welcoming committee at the club were fantastic…but…as we walk up to the door we notice where we are playing is UPSTAIRS….  No need to fear, our intense load-in training at 33 Golden Street and Strange Brew Pub had us ready for just this kind of obstacle.

We were scheduled second out of three this night with Cleveland locals Vulgar Devils opening and Brimstone Coven closing the night. Huge thanks to Andrew D’Cagna for putting on the show. The place was packed from the start of the first band up until the end, a truly fantastic night. We met a lot of new friends on this night and we really would like to return. We also unloaded a ton of merch which was a great feeling and it also was a great help with expenses on the road.  I think we really made an impact. Also let it be said that the high energy of Vulgar Devils was a great start and Brimstone as always crushed. 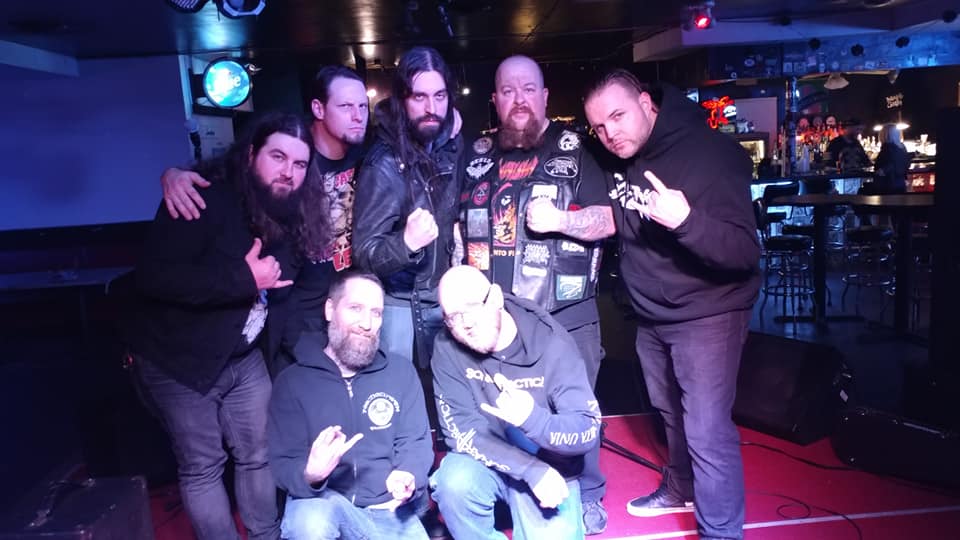 Mourn the Light and Brimstone Coven

We left the club in Cleveland and drove straight thru the night to get to a local town about 45 minutes from Madison, WI to meet up with our bassist Dan Jackson’s family, so he could spend some time with them. They accompanied us to the gig that afternoon (early show, 6pm-9pm).  We went to the show on about two hours sleep, but we were pumped. When we arrived we entered a pretty cool building with a stage, and rows of picnic tables that lined the floors in this mead hall. There was also an art gallery in the back. This was a free show with two locals, Cold Black River and Cosmic Relic, both solid stoner/doom/heavy rock bands.

We were on second this evening and for a Sunday it was a nice little crowd in this quiet area of the city. We had drink tickets and were able to sample some of mead this place had to offer and it was great.  Colleen, the owner, was gracious and was very knowledgeable. This was a very different style feel to show with the crowd being seated and all, but a unique experience and everyone was so nice including Ty Christian from the band Lords of the Trident, a good friend of our drummer Kyle.  Ty did a great job booking the show and MC’ing/running sound. Would love to come back and I urge other bands to check this place out.

After another night just outside of Madison, WI, we only had a two-ish hour ride to our next show —  so we had to time to get some good rest and we arrived at the venue early. We grabbed some prime parking and didn’t want to lose it, so we decided to stay and enjoy some beer.  One of our local friends who had helped us put this show on, Margo, stopped on her way and got us a Deep Dish Chicago pizza from Giordano’s. We had some locals in the bar arguing amongst each other as to where to go and who was the best, so when I called her and left it up to her and Giordano’s was the result; it was very good, but the locals continued to bicker. 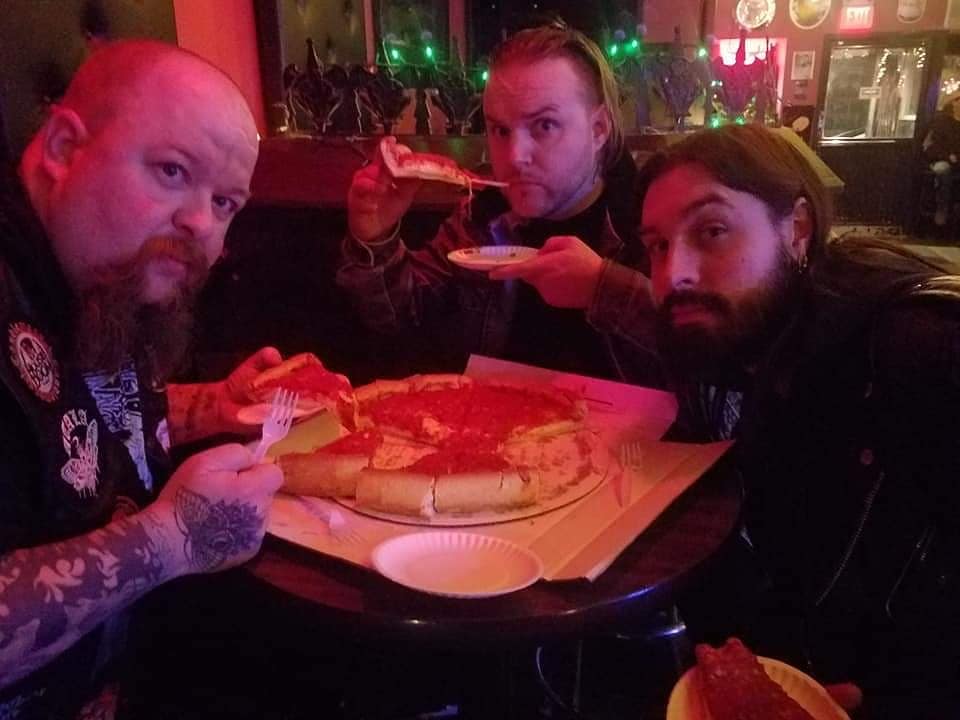 Dan’s family drove down from Wisconsin to join us again and we were joined by Coren and Margo amongst others from McCleod Media company who graciously ran with the booking of this show through Don Quixote Booking. The Live Wire Lounge was a small club with some heavy metal attitude, metal on the sound system, Bronson and Eastwood paintings on the wall, Malcolm Young and Alice Cooper paintings, and a Metallica Jukebox. Nice stage and lighting set up and it sounded good, their sound man Dave did an excellent job.

A very satisfying Monday night crowd for an out of state band, made us feel great going into a 15-hour trek to Texas to finally enjoy two days off before our next show….  Austin, here we come!

We arrived in Plano, TX at 9pm Tuesday night to check in to a hotel for a couple days and rest and unwind before our early start at SXSW on Thursday….

We headed out early to get to Austin not knowing what to expect.  We came upon the venue and were able to enter early as the owner was doing some maintenance work; he was very friendly offering us drinks and such right away and showed us around the place before anyone else had arrived. It is an old indoor/outdoor venue/arcade with three stages and a tattoo parlor attached. It reminded us of CT’s Wild Bills Nostalgia a bit with age old signs and movie posters and show fliers/paintings and such everywhere you looked — a place untouched by modern times.

Very friendly vibe and with the 74 degree and sunny March Texas weather how could you go wrong? We kicked off the party on the outdoor Garden Stage to a small crowd, but it felt good with the overall vibe of the place and playing outdoors in the beautiful weather.  It was also cool to be there with our CT brothers in When the Deadbolt Breaks showing support for each other as they played about an hour after us in the very dark ballroom stage, which fed their stage show with the projector of evil. Got to meet a bunch of other bands, like Black Road and Yatra who will be joining us at NESDF2 in May and we saw the Wasted Theory guys who we had just played with in Delaware earlier in the week. We had to cut out early to get on road to Nashville for our next day show, but we made sure to get Torchy’s tacos before leaving. YUM! 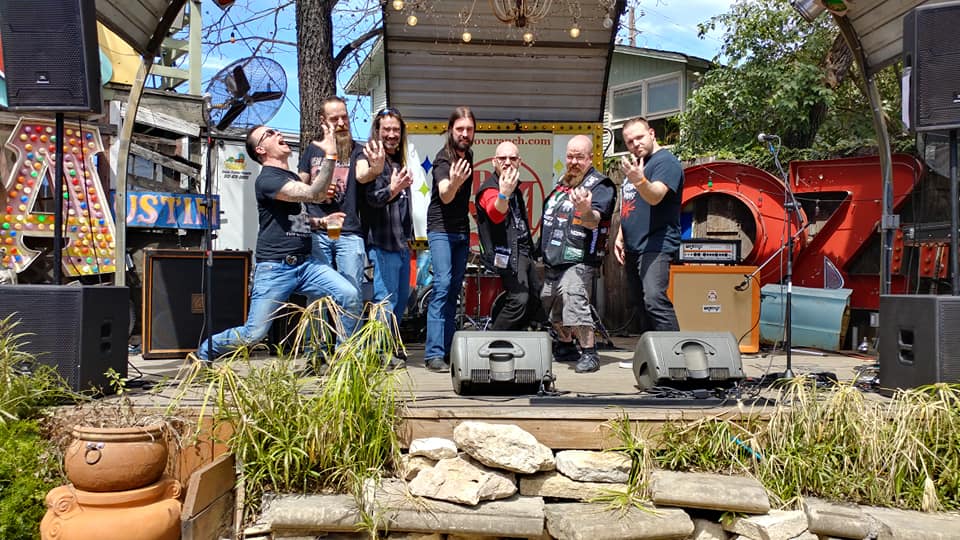 Mourn the Light and When The Deadbolt Breaks in sunny Austin, Texas.

We split up a long drive with a hotel stay for some rest, and then arrived at the club in Nashville. We were greeted by the locals and had a great conversation with a French folk artist staying in Nashville for a couple weeks to record an album. Looking at the club, it was definitely old, advertised as one of the oldest in Tennessee, and had a slightly odd layout, but the stage area was roomy and plenty of room for people to stand or sit to enjoy the show. The crowd was light but the people that were there really enjoyed it and that felt great. The other bands were great too as artists and people: Men Without Armies, Aye Mammoth, and Eye on the Sky. All very different sounding bands that still fit well together on the same show. Eye on the Sky had a huge heavy groove going on, Aye Mammoth, I could hear the prog influences shining through and Men Without Armies’ musicianship and stage performance were great playing a catchy yet unique metal style.

This was a fun way to end the run, with some old CT friends dropping by. We met up with our original drummer Greg Gates (now a North Carolina resident) for dinner at the Mellow Mushroom down the road from the venue. We ate, laughed, and we then followed him to the club that he has already become familiar with, a roomy club capable of taking on larger acts.

Just after setting up our merch in walked Ryan from Blasphemour records, who used to play in Crossthread in the CTHC scene in the 90’s. Now a NC resident, although two and a half hours from the venue we played, he made the drive and delivered the new Dying Wish Vinyl to me. I had no idea he was coming and was pleasantly surprised to see him. The bands on the bill were all super friendly. Deadly Edibles led it off and we went next. We started with a light crowd, but as our set went on we had drawn more people. We were followed by Leachate and our friends in The Stone Eye from Philly who I had worked with previously and they were a huge help getting us on the show. They will be joining us at NESDF2.  Also, I must say the sound guy on this night was amazing, best sound on stage we had all tour long and we came away feeling really good ending on such a high note. Back to the hotel for some sleep and then the thirteen-hour ride to Home Sweet Home…

See Mourn the Light, Brimstone Coven, Yatra, Black Road, and MANY more at New England Stoner and Doom Fest 2, May 3-5.  Get your NESDF single-day and weekend passes here.