I’m really not conceited enough to think that the breakup of Arcane Malevolence should take up an entire music column on this excellent e-zine. I originally decided to fit it in as a supplement to a bigger issue. Over the last few days however, I’ve come to realize that the breakup of my band IS a big deal to a number of people; more of a big deal than the band members themselves make it out to be. Being the vocalist of this band, I’m surprised that we really meant that much to people, and I suppose our breakup deserves a more thorough explanation. It’s not my place to explain the case of my band mates and their reasons to move on, but I can certainly speak for myself. So here we go… 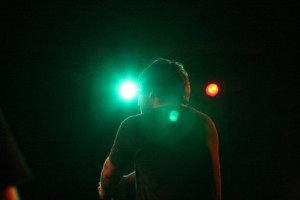 The author performing with Arcane in 2009 -- photo by Chris Rivera.

First of all, I am honored to say that this band was a part of my life for the last three years. Because of a last minute decision, I took a leap of faith and joined in on something that truly felt special. It wasn’t just the music that turned me on, but more importantly, it was the people. For the first time in the eight-or-so years of being involved with bands, I was grouped with three people I had no musical history with – it was immediately refreshing. What I didn’t know at the time was that these three people were to easily become three of the best people I’ve ever been in a band with. In the entire three years that we were together, there was never any drama, jealousy, complication or unnecessary confrontation. They are and will remain very good friends of mine, and in no way do I regret joining in with them. On top of that, this band also introduced me to a shit-ton of other great people that I probably wouldn’t have ever met had I not gotten involved. There are too many names to mention, and you all know who you are anyway.

There are three personal reasons for me parting ways with this band. Firstly, I’ve never thought of myself as a strong singer or musician in general. I’ve always felt like a writer trying to fit into a performer’s costume and it never really fit right to me. Up to this point, I’ve gotten away with it. I have my strengths I suppose; I can scream and growl with the best of them. However, I’m not that great of a singer, nor do I know anything about how to play or compose music. I feel that these inabilities would soon become a handicap and would deter this band or any other metal band’s agenda of pushing the boundaries and pushing the music forward to another level. In short, I’m not good enough to travel outside my comfort zone.

Secondly, there’s the matter of performing. When I first joined the band, my live presence was based on some estranged method of releasing a lot of pent up anger and aggression. I wasn’t a happy camper I guess, and to deal with this I decided to become a ranting, comedic and dancing maniac on the stage. This (for some reason) became immensely popular to my band mates and our “fans” and became a staple of our live act. At first it was fun, and therapeutic! Over the last year or so however, I’ve become a much happier person. The result of this is that the madman that I turned into when performing became less and less of a part of who I was, and more of a character; a character that’s become increasingly taxing to portray accurately. I no longer have a desire to go on a stage and be a crazy person for people, and acting like one for the sake of tradition has become stale and silly. I still have my anger issues, but they’re dealt with now in a calm and streamlined fashion. I feel I can express a whole lot more with paper and pen then some joke-cracking insult-machine with shitty dance moves ever could. (Editor’s Note: See video below…)

Finally – and this leads me into another issue – I’m disillusioned with metal music in general and the local metal scene in particular. My musical tastes have changed a lot throughout the last few years and I no longer have the connection to heavy metal that I used to have. I still do appreciate a small amount of it, and there’ll always be a part of me that finds it powerful and awe-inspiring when done right. Yet, I have no intention to base a chunk of my life around it any longer. As I’ve said, part of this is due to changes in taste, but it’s also due in large part to my disconnection with the local metal scene and my own weakness in being a vocalist/musician. With that being said, I feel I should explain this last point in further detail, to give this article a wider range of appeal…or criticism.

Of course, this is only my opinion, and my opinion is based on only what I’ve directly experienced. I’m sure there’s many who’ll disagree with the following statements, and have given more of themselves to this lifestyle then I’ve ever attempted. Therefore, let me base my criticisms from a bystander’s point-of-view rather than someone from the inside. I feel that despite the good intentions, loyalty, perseverance and wide-scope of the local metal scene, there remains many flaws that keep it from growing into something much greater, much more innovative and powerful. All the ingredients are there, and there’s enough of a scene to cause a serious stir — but the mentality is way off.

My criticism of the local metal scene can be confined into two definite statements:

After all that I’ve said, and despite some negative comments, I do appreciate being a part of this band and this scene. There are a lot of great people involved with it, and I’m happy to have been introduced to them. I’m walking away from active involvement with it perhaps, but not without appreciation, great memories and a few really great friends. I’m sure I’ll be keeping in contact with most of you crazy people in one way or another. My retreat from metal music means I’ll be spending a lot more time on my true labor of love: writing. Soo…there’ll be plenty more of my big open mouth to go around. And now that I’m definitely a bystander in the musical world, I believe that I’ll have a lot more energy to come around to shows. It’s just that it’s time to let somebody else handle the dick jokes and the bad improvisation. A big thank you to everyone who supported the band, and I’ll see y’all around! BLLAAARRGGG!!