Steve Rodgers outside his newest venue in Hamden, Connecticut. Photo by Marilyn Catasus.

Moving away from making music to providing an outlet for it was a crucial turning point in Steve Rodgers’s life. It was 2003 when he decided to open The Space, an all ages concert venue, in an old, beat down 1960s industrial park in Hamden, Connecticut. Now, almost a decade later, The Spaceland Ballroom is set to open this Friday – Rodger’s third music venue in the same industrial park.

“When I came home from tour, I would put on open mic nights and shows in my rehearsal space,” said Rodgers in a phone interview. “I ended up getting evicted because too many people started showing up.”

It was then that Rodgers realized that he needed to either continue touring with his band, Mighty Purple, to build a stronger fan base, or stay in Connecticut and open his own venue.

“It was time for me to start doing it for real or bow out,” he said. “Through many sit-downs and talks with close friends and those I look to for advice, I decided to go ahead and open a venue.”

It was then that The Space was born, about a minute off the Merritt Parkway and five minutes from downtown Hamden. The industrial park is surrounded by woods beside a reservoir, and the atmosphere comes off as rustic, even though The Space is still near civilization. The ability to hop on and off the highway but still feel lost in the woods is one of Rodger’s favorite aspects about the industrial park.

On the inside,Rodgers – an avid tag sale goer and flea makert purveyor – personalized the walls and the stage. The venue is small, but big enough to hold an audience of 150. Rodgers’ goal with The Space has been to provide local bands and lesser-known national touring groups with a place to play music and gain fans while simultaneously offering fans a safe, positive place to go to see new music.

“It’s a very DIY, basement-hall type vibe,” said Connecticut music promoter Mark Nussbaum of Manic Productions in a phone interview. “And it is basically that, but with a good sound system and a proper stage.”

As The Space’s popularity grew and availability opened up across the parking lot, Steve acquired the lease for part of another building in the park, which now hold’s his recently incarnated second venue – The Outer Space, also a music venue, but one that caters to the 21 and over crowd with a craft beer-heavy bar. The Outer Space hosts a different musician or musical group every night of the week and exudes that “pub on the corner” feel.

“Playing all over the country gave me an insight to venues and I got to see the good points and the bad points,” explained Rodgers. “It’s nice to have a 21 plus venue for the adults, but I wanted to keep The Space all ages crowd.”

Opening The Outer Space was a natural addition, according to Rodgers. The older crowd, he said, just kind of followed the transition as well. Many of them who attended shows at The Space became regular customers at The Outer Space as they became old enough to drink.

Operating simultaneously and harmoniously for two years now, both venues serve a similar but different purpose for its patrons. However, one type of venue was missing from the area, and when the large warehouse space connected directly to The Outer Space opened up, Rodgers jumped on it.

“A bigger venue will help fill the void in this county,” said Rodgers. “So many of our shows were reaching capacity of crowds. This will allow us to have more people at each show.” 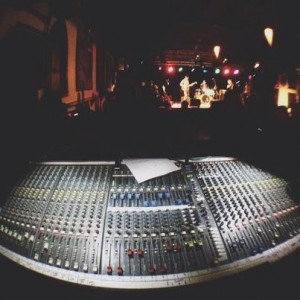 Over the last five months, Rodgers, along with many friends, has been cleaning up and transforming what once was a auto body shop into a state of the art music venue. The Spaceland Ballroom will hold a much larger capacity of people, allowing Rodgers and promoters to book larger, more nationally known acts – Akron/Family and Nick Zammuto of The Books are already on the Ballroom’s upcoming schedule. Currently, many artists stop in New York and Massachusetts, skipping over Connecticut entirely on their tours. Rodgers is hoping that will change.

“I think the promoters are all excited to be able to bring in more well-known names and draw in a larger crowd,” he said.

For The Spaceland Ballroom’s opening night, this Friday, March 15, Rodgers will be joining his brother John in a reunion performance of Mighty Purple. The brothers, who have played over 2,000 shows and put out eight full-length albums as Mighty Purple, haven’t played together in years. Both are looking forward to seeing their fans come out to celebrate the opening of the new venue.

“We traveled for a while, and built up small pockets of fans all over the country,” said Rodgers. “When we do play, people do come out of the woodwork to see us; it’s really cool.”

Advance tickets for opening night at The Spaceland Ballroom are $12 and $15 at the door. The music starts at 9pm. More information and a list of upcoming shows can be found at spacelandballroom.com. More information about shows at The Space and The Outer Space can also be found online at thespace.tk and theouterspace.net.  The Spaceland Ballroom and its sister venues are located at 291 Treadwell Street in Hamden.