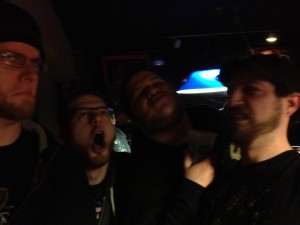 Long ago, within a metal scene far, far away, a quartet of mighty superhero musicians were birthed in the secretive and sacred valley of the fifth colony of a massive world power. They immediately sprung to monstrous size, thrashing about their enormous instruments of death upon the ears of the entire valley and beyond. For those who dared experience their epic beauty, their earth-shaking music and their maddening humor, cerebral gifts of entertainment and inspiration would abound the tiny brains of their audience. This league of man power dubbed themselves Lightsbane, and they’re on a spiritual quest that only a conceptual power metal five disc box-set could even begin to document, even with a 1000 man chorus! They’re the champions of melodic death metal; the pioneers of melodic death/thrash/sex metal; superheroes of the CT metal scene. Eat your heart out Gothernburg, Sweden. Take a hike, ummm…Richmond, Virginia. Lightsbane are here to fill up your life with overwhelming satisfaction. Just grab their dicks and kiss em’!

We now bring you to Cook’s Café in Naugatuck, where feeble Alternative Control blogger Christopher Baldwin is vainly attempting to impress the band with his mundane interview questions. Vocalist and guitarist Matthew the Magnificent laughs derisively at him as he explains how this dynamic quartet came together: 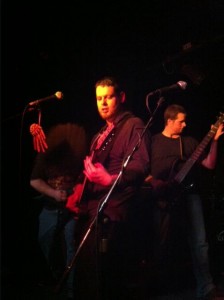 Lightsbane's brave leader Matthew the Magnificent, flanked by Thomas the Terrific and Joe the Jeweled.

“It was I, Matthew the Magnificent and our lead guitar player Thomas the Terrific who began the group. We starting jamming together, amused by the heroic metal styling of Metallica and Dimmu Borgir. We met some other superheroes along the way, including a previous drummer, a couple of bass players and a vocalist. Our old drummer left us to join another superhero metal group called Dream of Scipio who I must say are also incredibly super. Fortunately, a wise and powerful man by the name of Lee the Luxurious came to us bearing his super-human strength. He’s been wailing away on our thunderous skins and will continue to do so when a thousand years from now we reach our kingly afterlife of diamond cities and goblets brimming with liquid gold.”

Baldwin was so compelled by this godly answer, that he temporarily lost my mind and asked a very obvious and juvenile question. He asked them to explain their sound for people who might not have heard their music. Cave-rattling laughter came from all four of them, as Matthew proclaimed:

“You fool! We’re melodic death metal of course! And our lyrics tell of the ancient fables of the holy book of Bullshit. Teachings we focus on include Gay Stuff (And Other Animal Stories), The Pee-Pee That Was Afraid of Poo-Poo, and The Art of Disposing Felines.”

At this point, Thomas the Terrific was taking a moment to show his admiration for Lee the Luxurious by giving him a back rub. This is apparently a significant sign of affection in the Lightsbane group, for this action is repeated several more times throughout the interview. After this sensual moment has passed, Baldwin asked the band how they harness the superhuman energy to perform so many shows. Again, a roaring laughter ensues as Thomas the Terrific jokingly states:

Matthew chimes in at this point, and with an essence of mild depression states:

“It used to be easy because it was fun, driving around in the Thrashmobile and conquering the world venue by venue, but now we absolutely hate each other! If it wasn’t for hefty helpings of Viking blood and the inhaling of forest fires to calm us, we wouldn’t be the super group as you know us today.”

After another sequence of blood-curdling laughter, Baldwin gets up the nerve to ask the group about their influences. He comments that he definitely hears a strong Arsis influence in songs like “Melphagor,” but he would also like to know if there are any significant non-metal influences as well. He vainly attempts to get an answer from each member of the band individually. Lee starts the conversation with a vague and mocking response, no doubt due to the shame of being asked such a mundane question. He states:

“Puny human, I like all kinds of music, not just one kind! Bwahahahaha! 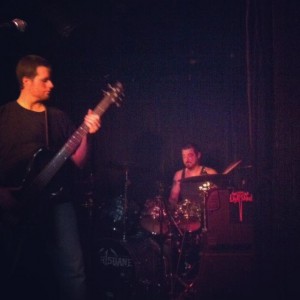 Joe the Jeweled and Lee the Luxurious

The loud and murderous voice of the bass player Joe the Jeweled is heard for the first time in all of its terrible fury as he gutturally growls out:

“Hootie and the Blowfish.”

The band tosses around a few more references to Hoobastank, Jefferson Airplane, Blind Melon, and Cake, until Thomas gives Baldwin a very heartfelt answer in a voice booming with otherworldly echo:

“I, Thomas the Terrific, am a huge fan of Johann Sebastian Bach. He is the shit, as some would say. His compositions are amazing and remain a key influence in my music.”

Matthew chimes in with his choice, proclaiming Wagner as an influence in terms of scope and composition, but also makes it clear that the composer’s Aryan views were “incredibly uncouth.”

All of the group nod approvingly of this statement and then moves on to the next question. Baldwin inquires about the songwriting method that the group uses and how the songs develop. Matthew breaks open a nearby skyscraper and swallows a catastrophic amount of people before clearing his throat and answering:

“It is usually Thomas and I who come up with the skeleton of a song to be. We work on it back at my palace in the clouds and then come to band practice with the idea. The riffs will go through various transformations, sometimes by mistake, until a back-and-forth misinterpretation of the idea eventually turns into a full-fledged fervent metal anthem.” He goes on to say, “Thomas will come up with a triumphant riff, we’ll all agree on its triumphant nature, and then maybe a year later it will triumph as a song.”

The whole group laughs, leveling an Australian city in the process. Baldwin is meek and fearful at this point, but he must continue the interview. From behind the safety of a pool table, he continues with a question about their upcoming untitled EP. He asks how it’s coming along and if it’s a true DIY effort. The entire group takes this time to inhale a deep breath, causing a brief Category 5 tornado, and then they bellow out:

After the debris ceased to fall from the ceiling, Baldwin made a brave statement about the fact that Lightsbane is involved in a type of music that doesn’t appeal to a massive amount of pathetic humans. It’s important for super metal groups to network with others to conquer the universe easier. With that said, he asks what other super groups Lightsbane likes to terrorize the populous with…in a platonic way. The entire group sighs a thousand blizzards before Matthew states some of Lightsbane’s favorite local super groups:

“We adore the likes of Xenosis, Kayotik, Dream of Scipio, Kali Ma and Continuum among many others.”

Baldwin now inquires on what groups Lightsbane likes to network with in a non-platonic way. Immediately, mighty wounds are punched through the wall by the four cocks of Lightsbane protruding like highway on-ramps from their super suits. The collective group all shout in a deafening explosion of pleasure:

Blackouts are reported throughout the Solar System, a second asteroid belt is formed from the remnants of Mercury and the sun comes 400,000 years closer to supernova status. The devastation is unspeakable, but Baldwin must finish the interview. He’s too close to achieving his goal to quit now. In a barely audible voice, he carefully asks Lightsbane how they see the CT metal scene today. Lee takes this time to answer sincerely these words of wisdom:

“In this world of superheroes we call the CT metal scene, there are a few good super groups, a few awesome super groups, but the entire heavy metal superhero scene is flooded.”

In an optimistic tone reserved for only the finest and most magnificent of voices, Matthew proclaims:

“Fortunately, many up and coming super groups are veering away from the typical breakdown format that Connecticut has been known for. Young superhero musicians in training are embracing the kind of metal superpowers that we support. Groups like Oath of Insanity prove this to be true, and we personally find this new embrace of thrash and melodic metal to be very promising.”

To wrap things up, Baldwin heaves a heavy sigh of relief as he asks the group to promote any of their upcoming events, and asks what’s in the future for Lightsbane. Matthew begins:

“As you are already aware of you trivial mortal, we have an ep that we’ve been working on and will be released soon. “Animals and Dicks” and “Liberace Metal” are working titles at the moment. On January 18th we will be fornicating with our instruments at Toads Place with Dead by Wednesday, Eyes of the Dead and Alcoholica. On February 22nd we’ll be destroying the stage at the El ‘n’ Gee Club in New London. Then later in March, the audience will be vomiting with profuse pleasure at our performance at the Webster Theater in Hartford alongside giants of the heavy metal superhero league including Soilwork, Wretched and Jeff Loomis!”

And that ends the tale of how Alternative Control blogger Christopher Baldwin bravely and foolishly interviewed the mighty metal group, Lightsbane. Baldwin had signaled the interview was over and our heroes disappeared in a mighty puff of smoke as large as a pyramid fire, leaving an unmatchable disaster zone behind them. It’ll be centuries before they can even begin to recover from the methane gas pollution left from Thomas alone…

For those who haven’t witnessed what Lightsbane has to offer, I highly suggest checking them out at an upcoming show and keeping a look out for their upcoming ep. In the meantime, feel free to visit their Facebook page complete with a tasty helping of some of their most pummeling tunes. To put it simply, if metal is your thing then it’s quite impossible to not enjoy what this group has to offer. This is Death Metal Dave signing out with a mighty BLLLLAAARRRGGGGG!!! 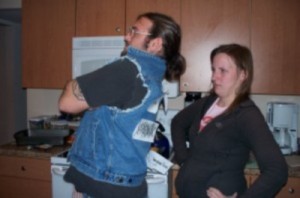 Death Metal Dave practices standing in front of girls who might be at Lightsbane shows -- just in case.