The world of today is filled with many great debates. There’s abortion, gay marriage, gun control, and healthcare to name a few. But all of them pale in comparison to the dispute between the fans and detractors of the metal band Meshuggah. 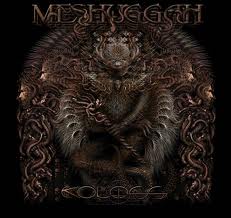 Both extreme sides of the argument hold to their viewpoints and very little bleed-over exists between those who find Meshuggah to be the best thing that’s ever happened to heavy metal, and those who find them to be nothing but a boring and trivial display. Chances are, the people that stand on the negative side of the fence won’t be making treks across the line to become admirers of the band any time soon, if ever. Some really risky re-invention would have to happen, and that’s not really what Meshuggah is about.

No matter what they do, their vision remains small, simple and strict. It’s the distinctiveness, the power and the inventiveness of Meshuggah inside their stern shell of musical discipline that makes them truly stand out from their peers. It’s this artistic stubbornness that also sets the line between the love and hatred of their music. Their new album Koloss is again an exercise of this ideal. It flaunts the tag of the Meshuggah sound unapologetically, yet stretches and contorts the walls they’ve made for themselves to make something fresh.

For those unfamiliar with Meshuggah, I’ll give a brief rundown. The music is almost entirely based on polyrhythmic exploration. Polyrhythms are basically two or more separate rhythmic patterns played simultaneously, with one rhythm usually being more irregular, causing a conflicting musical effect. In Meshuggah’s case, the base rhythm is usually in 4/4 time, with complex rhythms placed on top of it. The music therefore keeps a sense of deformity, while also retaining a strong groove. Melody is almost absent from the music, existing here and there only to set a mood or add an atmospheric touch. Their sound is bludgeoningly heavy, with dabs of eerie, dissonant acoustics peppered here and there.

What Koloss offers us is a more organic sound and a great deal of diversity. Gone are the more synthetic and robotic tinges that pervaded previous albums like Obzen or Catch 33. The songs here remain distinctive from each other, but all seem to come from the same cell pool. There’s a primitive kind of tribal essence to the sound this time, each track coming across as originating from the ritualistic compositions of ancient civilizations. The production has more grit on it; the guitars aren’t as processed and the drums sound completely natural, even if the triggers are still in place. Vibrancy to the riffs gives each song a bit more personality, placing heathen rage behind the ten organs of this mechanical monster called Koloss. And because of this, the music sounds so much more human. I can actually envision this album being concocted by people dealing with emotional turmoil, and not the cold and heartless gears of computer intelligence.

As I’ve said, one of the major strengths of Koloss is its diversity. Every song seems to pull into it some unique outside musical influence that distinguishes it from the rest. I hear a definite funk influence in “Do Not Look Down”; a waltz in “The Demon’s Name is Surveillance”; tribal world music in “Swarm”; and a circus-like vibe in “Demiurge” to name a few. There’s also some influence from other genres of metal, such as doom in “Break Those Bones Whose Sinews Gave It Motion” and SYL-type industrial in “The Hurt That Finds You First”.

All of this influence is incorporated fluently and naturally, to give the music just enough color without deterring from the Meshuggah sound too much. The band has once again found new ways to push and stretch at the tiny box they’ve built around themselves without breaking through it. I find this quite admirable, and a major asset to the band’s reputation as being innovators in the metal genre.

To sum it up, Koloss may not be the gigantic step into another musical realm like some people might have been expecting, or hoping for. It lacks Catch 33’s focus on minimalist composition or Nothing’s emphasis on groove and texture. It’s more like Obzen in the way that it revisits aspects the band has touched on in the past, yet propelling them into new capabilities. This diversity might make the overall theme of the album suffer a bit, but for me they more than make up for it with the quality of what’s being presented. On top of that, I get the impression that the organic and emotive twist to this album shows the band is really having a lot more fun with their music.

If this is the case, we can rest assured that three positive traits will continue. Meshuggah shows no signs of tiring; they welcome further exploration and experimentation with their music; and the purity of their art remains intact and resilient from expectations. And since the band finds itself amidst a sea of fans and cynics that both like to pick their music apart to the last bendy note, the perseverance of those traits is astounding.