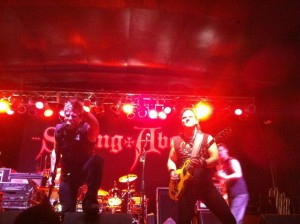 The guy in the Slayer shirt says it’s not heavy enough. The guy in the Dream Theater shirt says it’s not proggy enough. The guy in the Death shirt simply walks to the bar for another beer. Meanwhile, they sold out of their own t-shirts, they worked with Hollywood production to make their premiere music video, and when they debuted in NYC it wasn’t at some Village dive, it was at B.B. King’s in Times Square. Crossing Rubicon has been a topic of conversation in the Connecticut scene for some time, and they wouldn’t have it any other way. After reviewing their first video for the track “Perfection in Life” off the EP In Pains of Sleep, I recently sat with vocalist Scott Wawrzyniak and guitarist Matthew Douglas to discuss what makes this band precisely what it is.

Scott: Ask whatever you want to, just can’t be about lawsuits or eyeliner.

Alternative Control: Oh, I’ll get to the eyeliner… I’d like to begin where it started for AltCtrl, with the “Perfection in Life” video. ‘EmptyV’ and VH1 are long since lost to reality television, we don’t even get Carson Daly anymore. Why go to the lengths you went to, making such a professional video?

Matt: To me, if you’re going to bother doing something, you do it as well as you possibly can. Having a video that actually tells a story, which may not necessarily be referred to clearly in the song, really makes people think, and maybe see the song differently. It’s also not the same old live video that local bands may have. It separates us, and is kind of our way of trying to raise the bar and do something that everyone else isn’t. Looks like it’s working, we have a bunch of people talking about it.

S: For us the video was a watershed moment, a lot of people listen to Crossing Rubicon but they never hear us. We write songs about the darker side of life that I believe every human being experiences. A lot of people write us off as a party metal band, because we’re accessible, and have a look, but if you really listen to what we’re writing about, we write some heavy material, about addiction, sex, religion, bigotry, sex, politics. [Author’s note: Did he mention sex?] Everyone from soccer moms to priests, sinners and saints can relate to us, whether they like to or not.

AC: The video definitely sets you apart, Matt. It looks like it would’ve been on Headbanger’s Ball, when there was one. And Scott, you’re talking about how you have a look, and are accessible. How was that decision made? The entire band wearing a thematic ensemble, the music balancing between heavy metal and a more radio-friendly hard rock?

S: Our mission is to bring metal for the masses. You can listen to Nickleback and Foo Fighters and still get off on Crossing Rubicon, and we play well with other metal bands as well. We can bring a really diverse crowd to a metal show, and maybe introduce them to some other bands that they would not have listened to otherwise.

M: As far as the image goes, quite honestly, that’s all Jimmy Webb at Trash & Vaudeville. After [opening for Queensryche] we got some really good advice to work on our image. Scott gets the credit for getting four of us to NYC for the whole experience. I’m not like Scott at all, I absolutely HATE shopping… I have to say that day at Trash & Vaudeville was really a great experience. When you’re playing a show, you need to bring it. You’re there to entertain people, and you need to look the part. You can’t be wearing the same thing that the guy at the bar is wearing and do that effectively. It’s the same old adage, “Dress for the job you want, not the one you have.”

S: Getting Jimmie Webb to help us find our look was like having Mutt Lang produce our album. A dream come true, the man is a legend.

AC: So we’re saying Scott loves to shop. Noted. And the two of you are the ones who wear eyeliner, yes? Told you I’d get it in there…  It sounds like you enjoy, even thrive, in your spot as a polarizing project in CT’s hardcore-heavy scene. I noticed, having seen your most recent Cook’s Cafe show, that Scott can employ an even more expansive vocal range, and everyone can really cut loose and shred. Is it a conscious decision, then, to scale it back to be more accessible? Is that part of “metal for the masses”?

S: I think before any song we write gets out there we have to like it. The 5 of us all come from very diverse music backgrounds.

M: To me, the music comes pretty naturally, and I can only speak for myself, but I don’t think too much about trying to strike a balance, just writing parts that fit. I think the balance the songs have are less the result of conscious effort, and more the result of our different influences as musicians. Honestly, there’s SO much that we ‘can’ do that we haven’t done yet. Scott can actually play guitar, I can sing, and Zach, Jeff, and Brandi can, too. Just because you haven’t seen a side of this band yet doesn’t mean you won’t in the future. And the eyeliner… The eyeliner suggestion was from someone (who should probably remain nameless) that works with a national band, who pointed out that every one of them were wearing eyeliner [laughs]. It comes back to the ‘look the part’ thing. I never in a million years expected to be ‘that guy’ but, the way it was put to me is, onstage your features wash out under the lights. You want to be dramatic and be seen. Really, look at a whole bunch of big bands, a lot of them are wearing it.

AC: It’s been said that a chick in a band is a deliberate ploy, an effort to garner attention merely by her being there, especially in metal. I’ve seen Brandi, she not only plays well and hard, but also contributes vocals. In such an image-conscious project, is that a touchy subject? 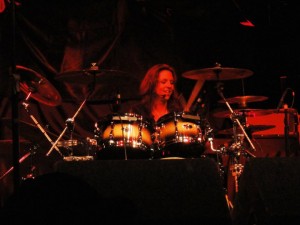 Brandi behind the kit -- photo by Steve Hubbard, stolen from Facebook.

M: Not to me. I mean, once again, it’s nice to be talked about, and there’s no bad press, but Brandi’s not at all a ploy. She can play her ass off, and she’s the one that does most of the screaming parts. My voice is a lot like Scott’s, there’s no way I can do those parts. And I really think her playing is a critical part of how we sound as a band. If we had the stereotypical double-bass ‘metal’ drummer, we wouldn’t sound the way we do. With her influences, she hears things differently than most drummers in metal bands, and that is a huge plus in my book. Hell, she’s the one doing a lot of the vocal harmony parts in the verses, while she plays! She’s probably the most metal of us all.

S: Make no mistakes about it, Brandi is a rock star. She’s an amazing drummer, vocalist, and performer. She is the total package. And personally, I believe girls need a hero in metal music. Someday in the future a 12 year old girl is gonna go out and buy a drum set, because she saw Brandi. I could not think of a better role model.

AC: This recent Cook’s Cafe show, you welcomed Tester, a group that has toured with KISS. A nationally-touring project traveled from MA to open for you in Naugatuck, CT. How did that come about? And how good a show do they put on, right?!?

S: We played with them at the Shock n Rock Festival, at the Worcester Palladium. When we saw Tony Tester playing a guitar solo while tea-bagging some dude, we all fell in love with those guys [laughs].

M: First of all, Tester is awesome! That was the most fun I’ve had at a show in a long time. I love playing with bands that make me work and step up the game. We’re at our best when we have a crowd that’s into being part of the show, and it’s awesome playing with bands that share that philosophy. We knew we wanted to do shows with them, it was just a matter of finding the right show and making schedules happen. Slide guitar with a hairpick is the best ever! I even got my pic taken with the legendary hairpick that night! [laughs]

AC: You guys certainly shared their energy, not only with your own venue-crushing performance, but also with a little night-closing medley… was that planned? I swear there were members of every band that played that night, singing covers and crowding together onstage, with audience members jumping in as well.

M: That was totally spontaneous and completely unrehearsed. I’m amazed at how well it came out. We hadn’t even considered playing those tunes since June. Also unplanned was Tester feeding us beers as we played. It’s all about getting the crowd into the show. I know there were a lot of pretty big shows that night, but I can say without any doubt that anyone who missed that show missed the best show that happened in CT that night.

S: We played something a little out of place that night, a ballad that I had written for a friend I’d lost that week, with a lot of mutual friends in attendance. After that song there were a lot of tears and a lot of emotions, and the next song on our set list was an anti-war song that lists the names of heroes we’ve lost in this war, which was a dedication to another friend we’ve lost. I knew that it wasn’t the right time to play that song, so I asked the band it was okay if we took a break from the set to play a couple covers. Thankfully, the Tester boys and Agrippa joined us impromptu, it totally lifted the mood, and lit a fire under everyone’s ass. It made everything a very special night.

AC: Well thank you gentlemen for your time, best of luck in future endeavors!