What unites Pillars of Ash and Invisible Birth of Death?  One is straight-ahead, the other a more varied metal palette.  One band is little-known on a small label, the other Relapse road warriors.  But both bands are from Georgia, they’ve shared the stage, and coincidentally their promos appeared in my email inbox around the same time.  So here goes!

Pillars of Ash (January 2016, Relapse Records) is Black Tusk’s final recording with founding bassist and vocalist Jonathan Athon, who passed away in an tragic motorcycle accident in November 2014.  The band describes themselves as sludge, but on this work I heard thrash and hardcore punk.  It maintains an urgent pace throughout — a kick in the stomach, a PBR in the air, back to another kick in the stomach.  But the rousing riffs belie dark lyrical content, based around death and the afterlife:  “The Wretched and forlorn, will cross these wasted fields,” the band sings on “Born of Strife.”  “Of rocks and dust and face the sky and / Embrace the Grey and Eternal Light.”

Invisible Birth of Death, released today via Deathbound Records, is an album of more twists and turns.  Savagist uses changing tempos and time signatures to take listeners on a journey from Mastodon to The Mars Volta.  The final track “Black and Endless” is a perfect example of this, with a delicate intro giving way to throttling riffage.  That song isn’t online at the moment, but “Nourishment for Larval” will give you the idea:

Personally I was more a fan of Savagist’s brand of Georgia sludge metal than Black Tusk’s because there was a lot more variety in the music.  However, both albums were enjoyable and I’m sure Black Tusk puts on a hell of a live show.  Speaking of which… 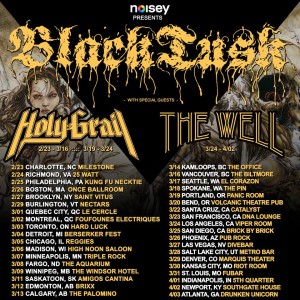