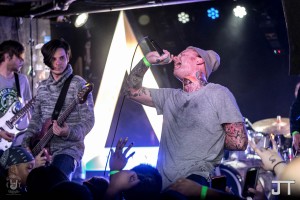 E. 11 Street, New York City: After regretting the choice of wearing a sweatshirt while waiting in line on March 26, 2016, I enter the venue; lit by blue light that ricocheted around the room via disco ball, Webster Hall’s The Studio – “Max Occupancy 320 Persons” – provided an oddly comforting concert space. It was my first time in Webster Hall, and with a bar for concertgoers over 21 and a coat check-in for people who were better equipped for the cold than I was, I had an ample amount of space to move around in, though it was still tight enough to provide a great metal/hardcore atmosphere. However, when I surveyed the stage, I was surprised that there was even room for two cabs and a kit; space was tight, and there were some Slaves props in the back too – the band’s logo, made out of large white and gold metal pieces with blue lightbulbs in each metal rod – which took up more room, leaving me a bit concerned about the possibility for band stage presence. The crowd for the show was a clear 18 – 25 demographic, and there was a fairly even split between men and women. One of my biggest fears for any smaller room is bad sound, so I moved around often to get a listen from multiple angles.

Conquer Divide, an all-female post-hardcore/metalcore band out of Detroit, Michigan, was working with a male fill-in guitarist that night, though this didn’t disrupt their performance at all. The band worked with a more modern setup: guitarists used digital processors. Sometimes, digital tones live sound fake, the sound technician was great and all levels were balanced and clear. Conquer Divide managed to pull off one of the best crowd responses I’ve ever seen for an opener on a non-major label tour, though I should mention that it seemed to take about one full song for the band to feel comfortable on stage; the first 2 – 3 minutes of their performance was stiff, but by the end of the first song, they were ripping into their material. This came as a relief, as some wear and tear on the band’s clean singer was noticeable during higher-notes – not enough for the average moshpitter to hear, but enough for me to catch – had me worried that the band would play it safe for the night.”Sink Your Teeth Into This,” the third song in the set, had an immediate pit of hardcore dancers. The set ended with the vocalists asking the crowd to sing “Happy Birthday” to Johnny Craig, vocalist of the Slaves, before leaving the stage. For the next set, I stood stage left by the bar to try and get a new angle on the crowd and the performance. 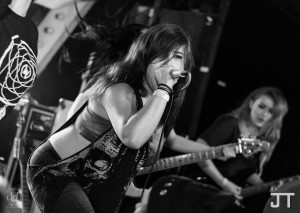 While Outline In Color worked with their gear, the 6 piece group from Tulsa, Oklahoma, the band’s screamer came out and said talked with the crowd, telling them it was the band’s first time playing in New York and that he needed crowd energy; the venue cheered before the set even started. Outline In Color had the best guitar and bass tones of the night, with Mesa Dual Rectifier and Stiletto heads providing a beautiful, full crunch. When the first track transitioned from melody to a drop into a breakdown, the band’s screamer prefaced by telling the crowd “You owe me energy, New York”; with samples on top of the live band, and the crowd exploded as the band took the reigns of the show. Though the stage was small, Outline In Color’s stage presence was big – a memorable live performance, especially during one of their more well-known songs, “Jury of Wolves.” Let me tell you, the bar side of the venue had an entirely different atmosphere; I was caught between a couple making out and another girl trying to Skype her friend – the couple was more successful than the call, as well as the circle pit that took place during the band’s second song, though the effort was appreciated by the band. “Alive,” a newer track by the band, also sounded great live and had a good crowd response. The set ended with the screamer telling people to stay and see the other bands, as well as to support by buying merch. I liked the view better from stage-right but not the bar groping, so I decided to move up closer towards the stage for the next act. 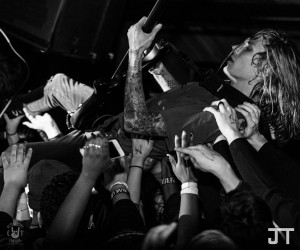 When Myka Relocate set up, I was pretty torn on how I was going to take their set in; with only one guitarist and a tone that was overly scratchy, but the bass tone was huge and filled the frequency void. Not even 2 minutes in, the crowd was surfing their way to the stage and singing along – Myka Relocate was a venue-favorite and the floor became all-consumed by the pit almost instantly. The singer took a minute to thank the crowd after the 2nd song for being the “rowdiest of the tour,” and my god was he right, at least for the night; as I typed these words, my cartwheeling friend was physically thrown into the front few rows by at least a dozen hardcore dancers. When “Nerve” kicked in, even the hardcore dancers’ girlfriends were throwing down. For the finale, “Something to Dream About,” nothing was held back for both band and crowd. I feel like this band deserves more of a show review, but their performance was something to experience, and I fully admit I was captivated and entertained the entire time; the “ONE MORE SONG!” crowd chant was very warranted, and the set made me a fan of the band. I wanted to go middle for the next band, but I knew they were well known, and I wanted to be able to take notes during the set without losing my phone from a pit, so I decided to stay stage right. 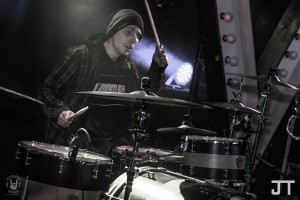 …and wow, I could not have been more wrong about possibly losing my phone. Capture The Crown, a band who’s no stranger to the metalcore/hardcore scene, was a letdown for the night. The band’s sound was worse than every other band based on their own choices; the guitarist’s digitized tone sounded fake, the vocals were overly saturated with reverb, and coupled with overly-loud and thin-sounding kick drum triggers, the sound was a drain on the performance for me. The crowd had a pit going and a crowd surfer, but the band’s opening track didn’t seem to have the crowd’s attention and was lackluster. Members didn’t move much despite having much more room since opening band’s equipment were now off the stage, but more importantly, they didn’t seem to care about the set, which kept the low-energy vibe of the first track a theme throughout their timeslot. The mid-set banter, filled with self-defeating humor about their upcoming music release, went on for far too long before a new song was played, which didn’t seem to go over with the crowd too well. During the band’s heaviest songs, “Reign of Terror” into “Red Light District,” the crowd was jumping, but the call for a circle pit did nothing – a direct display of the crowd’s split mentality toward the set. The icing on the cake was when they played for the first 10 seconds of their biggest hit, “You Call That A Knife?”, cut it, and said “Just kidding,” then proceeded to play another song before making jokes that they were going to play Nickelback covers. Talk about a mood killer—members of the crowd were legitimately pissed. 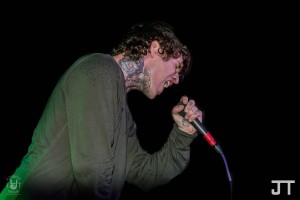 While I had to leave to catch my train – commuting is great! – Peter took over for a killer performance for Slaves, so the rest of the review is based off of his notes and my nitpicking. The group is well known for their metalcore/post-hardcore sound, and the distinct band members are a huge draw for the group, specifically Craig, front man and clear standout of the group. The initial stage props I had noticed were prominent throughout the set, and with additional equipment cleared from the stage, there was more room for these props to “shine” – literally and metaphorically – and provide space for band members. These lights fit the band’s intimate and soulful sound…but the sound was a bit of an issue, as there were some stage-center vocal feedback problems for the first 2 or 3 songs. While this wouldn’t typically be a big problem, a band who only has a 30 – 45 minute set can truly suffer from a lack of vocal clarity – this is also a huge hit to Slaves, as the emphasis on Craig is the pinnacle of the band. The band overdid the emphasis on him a bit too much, and it was more of “Johnny Craig with live backing tracks” instead of a full, cohesive band who felt and lived the music. The more simplistic music and the vocal-emphasis of the band worked in the band’s favor for the crowd, who sang along loudly and had a lot of energy; this was especially noticeable during one of the band’s hits, “My Soul Is Empty and Full of White Girls.” 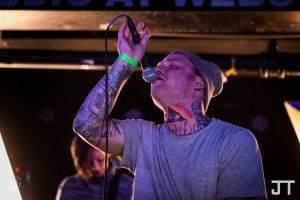 Overall, neither Peter nor I regret the $26 we spent to see this tour; the venue was great for a metal/hardcore show, the crowd was full of good sports (even if they didn’t make it on the U.S Olympic Gymnastics team), and the artists’ performances captivated both me – a newer listener to many acts in this genre – and longtime fans in the audience.

For more of Peter’s photos from this show, visit his Facebook album.