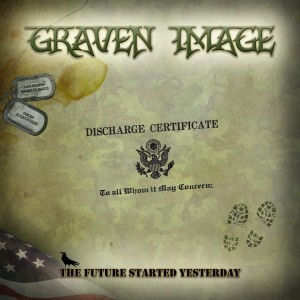 For this writer, concept albums are a hit-or-miss proposition.  The idea needs to both inspire the band musically and power a lyrical thread strong enough to engage the listener intellectually.  Nobody wants to hear Dream Theater grind out eight epic songs about waffles.  (Or do we?)  CT-based metal mavens Graven Image found their muse and have released nine songs with a story to tell and a theme that is very close to current world and American culture.

The Future Started Yesterday’s concept centers on a soldier who has been mentally and physically battered by the atrocities of war.  “One Mistake” begins with a short scene in a psychiatrist’s office where a therapist engages the protagonist before the song kicks in with solid trad-metal riffage.  The arrangement is very straight-forward until the midway point where the guitars are stripped away, leaving some dynamic bass-and-drum interplay.  “Far Away” changes gears as the soldier reads a letter, an acoustic guitar strumming a progression that would be at home in the 80’s Guns ‘n Roses canon.  Vocalist Martin O’Brien carries the song, his voice conveying the lonely, desperate emotion of someone longing for a family member or lover thousands of miles away.  As the last notes fades out, “No Atheist In A Foxhole” slams in, frenetic and aggressive in method.  Guitarist Paul Coleman throws down a fitting lead – short and to-the-point, like a live grenade at your feet.

Throughout the album the rhythm section of drummer Phil Michalak and bassist Andrew Purchia pounds away, riffing in lock-step and deftly navigating the pace changes in “Demons.”  New guitarist Scott Williams and the aforementioned Coleman do a fine job of sharing the sonic space, rarely stepping on each other’s toes.  They shift effortlessly from guitar harmony to unison riff with tasteful embellishments and ripping leads. Coleman’s solo early in “1600 Deception Avenue,” the band’s take on classic Megadeth, is a great segue into the main riff.  Williams deploys his versatile style on the lead in “Demons,” twisting and diving before returning the tumbling verse parts.  Two songs, in particular, exhibit the band’s ability to shift gears.  Both “Twisted And Broken” and “World Of Decay” begin with acoustic passages and break into classic metal and ending on a faster note.  “World Of Decay” also showcases O’Brien’s voice which, in places, is a dead-ringer for Rob Halford circa Painkiller and the high notes near the end of “…Decay” are worth a fair share of Dungeon Master’s Guides.

Concept albums are rare and successful concept albums are much more so, like finding a $50 bill in your pocket or an original Emmure riff.  Graven Image has done a fantastic job bundling nine songs around a single purpose and as a cohesive piece of art The Future Started Yesterday works.  The ebbs and flows match both the experiences of the soldier as well as his mental condition following the events.  What makes an album like Queensrÿche’s Operation: Mindcrime so unique is the ability to listen to the songs outside of the concept and have them work as individual entities.  You don’t need to know a single thing about Nikki, Dr. X, or Sister Mary to make sense of the song, to find where it fits.  Putting The Future Started Yesterday on random really separates the strongest material from the idea-specific offerings.  I feel like the acoustic songs are bit too stripped down and don’t stand on their own as well as the high-energy tracks.

Still, this is a minor quibble and at the end of the day Graven Image has crafted a concept record that actually works. Recorded and mixed locally by Dave Vignola and Vision Studios (Naugatuck, CT), The Future Started Yesterday is an interesting debut album as it sets the bar for all future offerings.  Are we going to see a second movement that further fleshes out our protagonist?  Something that is based on another story-driven idea?  Something completely different?  That’s up to the collective vision of Graven Image and I’m interested to see which direction they take.