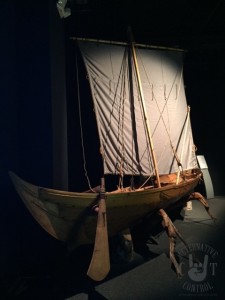 Boat replica in The Vikings Exhibition

Yes, I was really that pumped.  I even took a hour of personal time so I could get all “metalled up” and check out the museum before the show.  It turns out that Discovery Times Square is directly across the street from Playstation Theater — super-convenient.

Not many people wanted to be at a museum at 5:00 on a Friday, so there were times when I had the Vikings Exhibition all to myself.  There was something interactive in almost every section, like a sword replica that could be lifted to feel its weight and a touch-screen game where visitors could “dress the Viking.”  Religion was a one of the main components of the exhibit.  It was interesting to see how the Norse culture changed as Christianity took more of a hold over time — and it’s worth noting that the further north people were, the longer it took Christianity to arrive.

There was also a lot of information about the ancient Scandinavians’ daily lives and economy.  Objects that we would find unremarkable, like glass beakers and cowry shells,  were in fact prized trade items from far-off lands.  And not only was trading slaves with other groups important, but there were also many “unfree” people (as the museum referred to them) who lived within the Viking society itself.   It was straight out of an Amon Amarth song: “The day draws to an end / The night comes dark and cold / We return to our ships / With silver, slaves and gold.”

The price of Vikings was a little steep at $29.50 plus tax for an adult ticket.  It was advertised for $20.50 when it opened, but maybe that was just an introductory deal.  Still, I was glad I went — I spent a little over an hour there, but could have stayed longer if I didn’t have to continue the adventure. 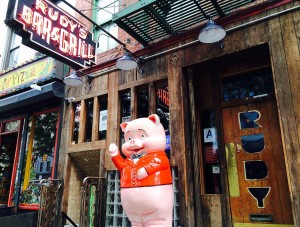 Photo borrowed from Rudy’s website — but I’m advertising their bar, so hopefully they won’t mind.

The next stop was Rudy’s Bar & Grill, a dive a few blocks away from Times Square.  To my surprise, they had $3 drafts and $4 ‘Gansett tallboys, which I didn’t think existed in midtown Manhattan.  I met my husband and his friends there, and we made friends with some random dudes who we instantly knew were also going to the Amon Amarth show.

By the time we finished a couple pitchers and had some pizza at Two Boots next door, we had missed Exmortus — which was unfortunate because I know my fellow AltCtrl-heads Bill and Lisa really like them, and I was looking forward to checking them out.  One cool thing: while I was getting my photo pass, Richard Christy was next to me at the box office!  Like a doofus, I said hello and told him I’d talked to him on the phone one time.  He was nice about it.  I’m sure that interview he did with AltCtrl in 2012 really made an impression on his psyche….

We were early enough that I was able to get some pictures of Amon Amarth’s fellow Swedes Entombed A.D., who were new to me.  They were a lot of fun — it’s always cool to see a band that’s brutal as hell but with the attitude of kids in a bouncy castle.  Just because you’re melting faces doesn’t mean you can’t have a great time! 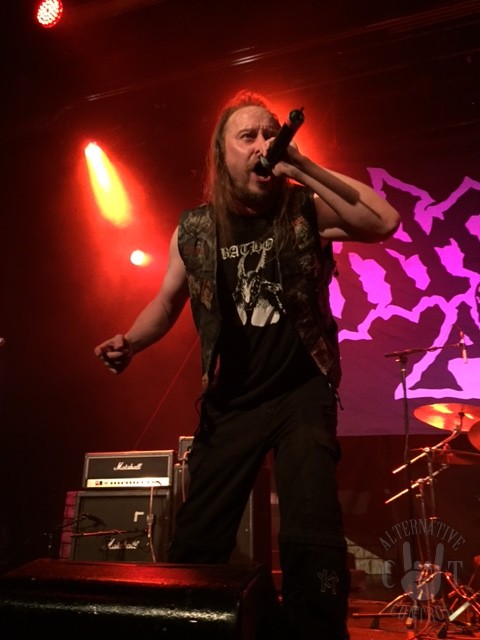 Next up was the reason we came: Amon Amarth.  They opened with “Pursuit of Vikings” from their fifth album Fate of Norns. It took a couple songs to get to one of the singles from Jomsviking, “First Kill.”  But really, you can just Google the setlist if you want to know every single song.  I was sad that they didn’t play the title track from With Oden on Our Side, but with ten albums of material to choose from, my odds weren’t great. 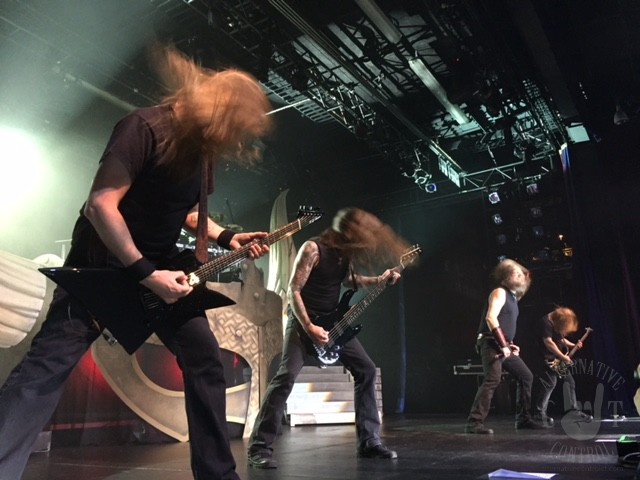 Their performance was spot-on, like listening to the albums.  And as friends had told me, the stage setup was really neat!  The drummer was on top of giant, red-eyed Viking helmet with staircases on either side.  Every couple songs, masked medieval warriors would come out wielding spears or bows and threaten the crowd from the top of the stairs.  Near the end, Johan even busted out Thor’s Hammer!  And the singer from Entombed came out and sang on one of the encore songs, “Guardians of Asgaard,” which he had recorded with the band on Twilight of the Thunder God. 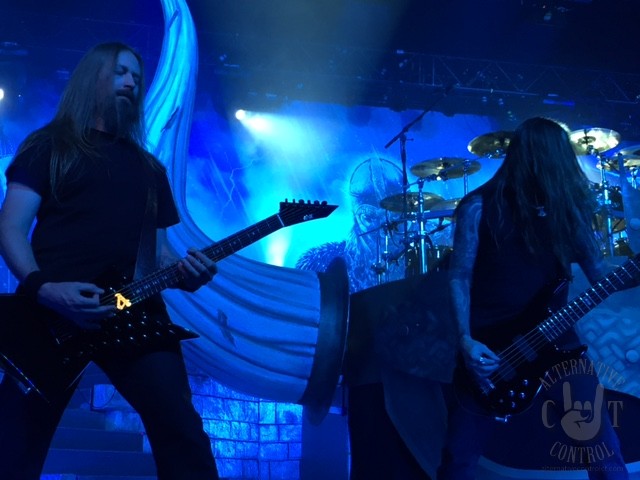 Can I talk about the new album for a minute?  Of course I can, it’s my blog and I’ll party if I want to.  Jomsviking is freakin’ great.  All the haters on the internet who are upset that the leads are a little different or that there’s a duet with Doro need to get their ears checked.  Maybe one or two tracks are a little campy, but overall it’s a moving narrative that shows the band’s musical and conceptual evolution.  It’s impossible not to feel sad for the protagonist in “A Dream That Cannot Be,” when he realizes he’s become the bad guy that he fought in “First Kill.”  Damn bro, not even in the friend zone — my husband made a good point that Jomsviking’s story is like a reverse rendition of The Odyssey.  (At least at the end.)  Also, kudos to Amon Amarth for putting a feminist twist in a death metal album. 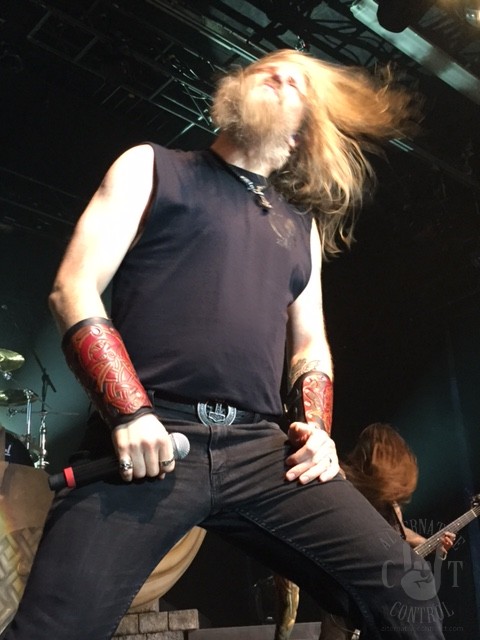 My Norse adventure was, as Borat would put it, “great success.”  Check out the Facebook album for more super iPhone photos of the bands and the crowd.  And until next time… Raise your horns!

Photo credentials courtesy of Earsplit PR.  All opinions are our own.