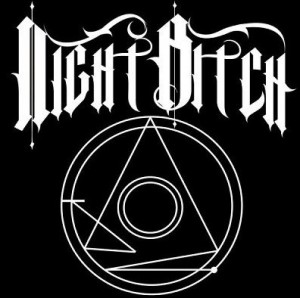 It’s been a while, but our favorite purveyors of sleazy trad metal, Nightbitch, are back with a new self-titled EP on The Ajna Offensive, which they recently showcased at a record release on June 5 at Cherry Street Station with Pussywolf, Nasty Disaster and Buzzard Canyon.

Well, not wanting to rest on their laurels, the band is playing another show, a free matinee on June 28 at Three Sheets in New Haven with noise-punk miscreants Murdervan.

So with this recent flurry of activity, we thought it would be a great time to send guitarist Ryan Adams some questions and catch up with the band’s newest sleazings. In addition to Adams, Nightbitch features Chris Taylor Beaudette on vocals/organ, Mark Eles on bass and Dave Parmelee on drums.

Below are his answers.

How does it feel to finally get these songs out and released? As I understand, these were recorded almost 2 years ago.  Why did it take so long?

It’s been quite a long time coming, Tom.  And it feels good.  Thought I was gonna fire a wax dart for a minute, there.  The four songs on the 10″ were recorded between Xmas and New Year 2013. Artwork was responsible for the bulk of the delay, but holding the final product in my hands, I can confidently say that it was worth the wait.  We couldn’t be more pleased with the presentation, packaging and sonic contents.

How is the new EP different from your previous releases? How is it similar?

This release marks the recorded debut of NightBitch MK III, with Dave Parmelee replacing Chris on drums and Chris moving on to Hammond organ, in addition to singing.  It’s a logical progression from our previous releases – only more gooder.  We’re not pulling any punches or wild stylistic changes on you… YET.

What made you decide to do a cover of BOC’s “Cities On Flame”?

What made Sasha ask Rocco to sock her in the tummy first time they boned?

Nightbitch is always known as a band with highly, striking visuals and the cover of the new album is no different. What made you decide to go with this cover? And do you expect any sort of complaints because of it?

Peoples’ reactions to our visuals will forever amuse and bewilder.  At this point it’s around 90% aesthetic ego immersion and 10% provocation.  A family-sized order of “This is what we like” with a side of “Fuck you”.  Playing with power exchange inherent in sex really gets some people fired up – and not always how you might expect. I’ve encountered more than a few guys who were totally bummed out at what they perceived to be sexism or misogyny and girls who were… enthusiastically picking up what we’ve been putting down.  It’s all about what you personally are bringing to your interpretation and I enjoy fucking with that.  When we consecrated ourselves to the filth and sleaze of the Old Tradition, we knew it wouldn’t be for everyone.  And we don’t play for everyone.  Our appeal is… “selective”.

In addition, you have also been known to liven up your performances with clips of trashy movies to having burlesque performers shake it to your music. Do you have anything special planned for the show on June 28? Or in general?

In addition, it’s been a pretty quiet time for the band for the past year or so. Is it about to get loud again? And how so?

We knew it would take a while for this record to see the light of day, so we’ve been concentrating on writing new songs and perhaps a little bit of recording.  I’ve also been hard at work putting together the video for “Caged Heat” which I’ve linked below and I must tell you is THOROUGHLY UNSAFE FOR WORK.  We also have a really cool gig announcement for July here in CT that will be made any day now, but it’s not my place to say. 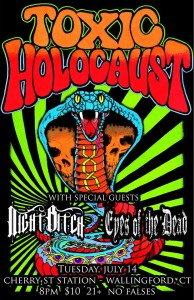 You have a history of making totally awesome and inappropriate t-shirt designs. Do you have anything new and sleazy planned in this regard?

The Nino Cerruti of perversion never rests.  If you don’t have to turn it inside-out at the behest of mall security, it ain’t true NightBitch merchandise; you got that shit at the flea market.

After the record comes out, what are your plans? Is it too early to be talking about a follow up? Maybe a full length to break up your streak of EPs? More touring?

We’re going to break up and buy aquatic pleasurecraft, meet up at the marina, sip dark n’ stormies and listen to Duran Duran.  Sorry, dude.

In addition to the Three Sheets show on 6/28, Nightbitch is also opening for Toxic Holocaust at Cherry Street Station on 7/14 along with Eyes of the Dead.