At work, we talk a lot about how important it is for students to have background knowledge of influential people and important historical events – in other words, “No, sweetie, Michelle Obama’s mother couldn’t possibly have been a slave BECAUSE THE CIVIL WAR ENDED IN 1865!”  I’m finding that background knowledge is also helpful in the realm of metal.

I’ve never been a music trivia person; I listened to the self-titled Sublime album on repeat from eighth grade ‘til college, but I couldn’t tell you half the song titles, or the even names of any band members besides Bradley.  And metal?  Forget it.  Bruce Dickinson’s a singer, right? Megadeth only has one “a” in it?  This lack of background knowledge gets me into some goofy situations editing a blog that is supposed to be about metal! 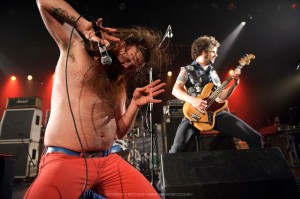 Valient Himself -- Photo by Matthew Eisman

The latest situation began over a year ago, when I interviewed Andrea Black of Howl.  (BTW, she’s not in the band any more – plus one trivia point for me!)  At the time, they were on tour with Junius and Valient Thorr.

The interview went fine and I looked up those other bands on Youtube.  Valient Thorr seemed pretty cool – hard rock n roll, a hairy shirtless singer in bright red pants…

Seven or eight months after that, I saw that Jucifer was coming to the Heirloom Theater.  “Awesome!” I thought to myself.  “That band that was on tour with Howl!”  …Who I had mixed up with Junius, who by this time I thought was Valient Thorr.

Fourteen seconds of Youtube research revealed that Jucifer was definitely not “Fake Valient Thorr.”   However, they did have a chick in the band, so I figured I’d interview them/her/the chick.

Now, months after that epic interview and ear-drum-shattering concert, I finally remembered that the band with the guy in the red pants was called Valient Thorr.  They’re about to go on tour with Corrosion of Conformity, another band that I like but know nothing about; my COC background knowledge is limited to playing “Albatross” in a cover band when I was twenty and watching a bunch of random Youtube videos.  All the videos I clicked on were fucking awesome: slow metal with a Southern vibe that made me want to drink beer, fight the man, throw my horns in the air…

So, I was really psyched about the kickoff show at the Gramercy on 3/1– two awesome bands, one train ride, I could slouch through work the next day…

And then I was unceremoniously informed on Facebook that “Pepper’s not going on tour with them.”

Well, who the fuck is Pepper??

Apparently, Pepper Keenan is kind of a big deal.  He joined COC in 1989, but didn’t become the lead singer until their 1994 album Deliverance.  Although he is still “in the band,” he’s been on hiatus while playing guitar with Down, who are also kind of a big deal.  (Thanks, Wikipedia!)

Very importantly, Pepper is the singer that brought COC its Southern sound; on this tour (without Pepper) they’re going to have more of an 80s hardcore sound.  I was also informed that COC has had “like five different sounds” over the course of their long career, but I don’t know what the heck the other three are.  Samba, anyone? 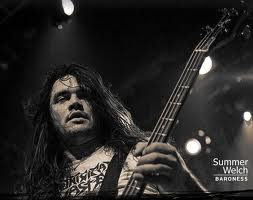 Summer Welch: Not in Valient Thorr, and also not a chick.

So, nobody wants to go to this show with me, and I’m not sure if I want to see Valient Thorr and 80s-hardcore-COC by myself.  At least now I know about Pepper.  I’d also like to interview someone from Valient Thorr even though they don’t have any chicks in their band.  The bassist, despite being named Summer, is not a chick –

Wait, wrong band.  That’s Baroness.  You’d think with a name like Baroness, they’d have a chick, right?  Like, who’s the baroness?  They’re just a bunch of barons…

But anyhow, the wacky dudes of Valient Thorr have not responded to my inquiries.  I’ve ordered Deliverance and VT’s Legend of the World, so instead of going to the show I’ll probably sit here with my cats and listen to those albums, “building background knowledge.”

Will I ever be an expert in metal trivia?  Probably not.  Will I continue watching random Youtube videos and enjoying the music without knowing every band’s 30-year history of lineup changes?  You betcha.

And remember, kids, slavery ended a long-ass time ago.  Read a flippin’ book.