Trying to decide what life-changing album to write about, it occurred to me that I could never narrow it down to just one. You see, my taste in music has evolved over time (or devolved, depending how you look at it…) so picking just ONE album that changed my life would be nearly impossible.

This album is so awesome, even Bert’s unibrow is acceptable.

As a child, the first album I can remember loving was actually a Sesame Street vinyl that my brother and I enjoyed the hell out of as kids. Havin’ Fun With Ernie & Bert featured Muppet voices singing songs and leading activities. Unfortunately for you, I couldn’t find any Youtube links to any of it, but trust me when I say how much fun we had playing along with this album. They encouraged you to bang on pots and pans as part of their marching band, and led you on a tiger hunt, where you had to run and climb and crawl, and since we were impressionable and imaginative kids, of course we did all of those things all around our house which I’m sure annoyed the crap out of our mother — but which I still remember, even now almost 30 years later.

Growing up, I was mortified that my dad listened to country, while my mom listened to… I don’t know, pop music I guess. Or rock, or whatever they were calling mainstream stuff at the time. Friends reminisce about how their parents were the ones who introduced them to classic rock, but I don’t recall my parents ever listening to that.  Dad had his Alan Jackson and Garth Brooks, and mom let us kids listen to Bon Jovi and NKOTB without putting up too much of a complaint. Sure, her Jim Croce tape played in the car when she was sick of ‘our’ stuff, but for the most part, we listened to a lot of Z100. (Why am I admitting this to you? I am shameless, that is why.) I have a weakness for 80s hair metal, and will sing along when I hear it, but I certainly wouldn’t call it life-changing or choose one album from that genre as a defining moment in my life. 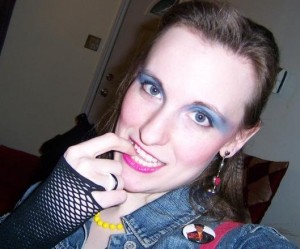 See, I told you I was shameless. You know you're jealous of my Joey pin!

The first CD I ever bought was Green Day’s Kerplunk. This was before I even had a CD player, mind you, and it’s not like I didn’t already have plenty of cassettes I could listen to, but that first shiny compact disc, purchased with my hard-earned babysitting money was a turning point. Not only was Green Day my first CD, they were also my first concert. Yeah, I know what you’re thinking: crappy faux-punk music. But that shit was THE shit at the time, and I loved the hell out of it. And while I’m slightly embarrassed by how much I enjoyed that music back in the day, I also feel the need to point out that they’re still making music, touring, and have a show on Broadway. “Welcome to Paradise,” before it got totally played out, was a favorite, as well as “Who Wrote Holden Caulfield” because I was going through an angsty Catcher In the Rye phase at the time.  Loud, abrasive songs featuring masturbation jokes: all things I appreciated in my middle school years.

The first album that really changed my life musically was Sonic Youth’s Daydream Nation. To this day, “Teen Age Riot” is one of my favorite songs of all time. SY was like nothing I’d ever heard before. I love the creativity and the “noise” aspect, as well as the diversity of their sound vocally, with three band members taking turns as singer. While most people don’t even know SY, their influence on music in the 90s is undeniable. Pioneering the grungy “alternative” movement, they’re often cited by other, more famous artists as major influences, and for their 1991 tour, they chose an unknown act called Nirvana to open for them. “Smells Like Teen Spirit” wasn’t even released until the end of that year. In high school I wore Sonic Youth t-shirts every day, and saved up babysitting money to see them in concert 7 times. I was in love. I wanted to be Kim Gordon, and not just because she was married to Thurston Moore. She’s just this really badass artsy chick whose vocals range from sultry to sweet, and you’ve gotta respect that. And their music blends these beautiful riffs with crazy noise made by jamming things like screwdrivers into their guitars. This music, more than anything, defined my teenage years.  Daydream Nation is a great album — seriously, check it out if you aren’t familiar.

College roommates are to blame for my current musical preference. I started college with an indie, punk, and riot grrl radio show, and somehow graduated with a deep love for country music. You can’t deny the beauty of a song that can give you the chills or bring you to tears. To this day, the line, “Katie looks at Tommy like I still look at you” gives me actual chills. I love the stories told in country songs, and all the raw emotion. Watch Sugarland’s “Stay” video and listen to the emotion and heartache in her voice and tell me you don’t cry right along with her, or at the very least feel her pain.

Sitting in a friend’s car the other night rocking out to country music, it occurred to me that I hadn’t felt that happy in a long time. I listen to other types of music all the time, but when I am happiest, I’m immersing myself in songs that tell a story about love, and heartbreak, and everything in between. Perhaps that says a lot about where I’m at in my own life, which I probably shouldn’t be proud of, but at the very least, I’m fascinated by how the evolution of my musical tastes has helped shape me personally. So while Jessie May might think it’s “cheating” to pick more than one album for this article, the music I listened to at different points in my life defined who I was as a person at that moment, so I don’t think I have chosen more than my share.  And if it IS cheating, maybe I should just go write a country song about it. 😉