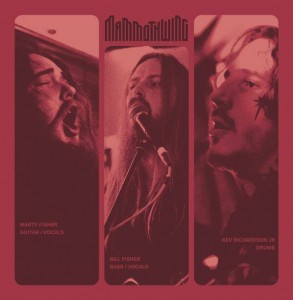 Mammothwing is a doom band based out of Nottingham, UK. They’re a brand new trio to the scene, and I would have missed them had it not been for my relentless browsing of internet music sites. I liked the album cover, which is an album trait that dictates more often than not what I choose to listen to. The cover has that rustic color scheme painted with a Roger Dean kind of alien landscape, which I’m a sucker for. That doesn’t always mean the music is just as good, but I was relieved when Morning Light opener “Cosmic Vagabond” rolled with a shimmering thud through my speakers.

This album has been out since the end of last year, but I just had to include it in this year’s review rotation – it’s that good. And at 35 minutes playing time, you don’t need to strain the limits of your attention span. Morning Light is a brief but potent mash up of doom metal and psychedelic blues. And Mammothwing seems to understand how to keep the right balance between both aspects of their sound while remaining spontaneous. There are moments during the album where the band is in love with the sound of their instruments. Riffs swell and hum and buzz in a drugged, wallowing fashion like sunlight trying to break through the yellow dampness of an autumn swamp. Soulful blues-leads dribble like raindrops over a drought-ridden hillside. Cymbals splash like water over rocks of drooping moss. The vocals moan and groggily soar like the wails of an over-worked farmer singing about the pits of his depressive state.

This is music that’s driven more by musical mood swings than disciplined composition. Sometimes the band is content to ride a soft, slow groove and sometimes they collect themselves for a gigantic swell of doom. Sometimes they want to pick up your spirits with rousing blues and other times they want to kill your optimism with moping stoner jams. But there’s never a moment on this when I feel like the band loses emotional merit. This album is all feels and very little structure. Just listen to that chorus in “Black Woman.”  I haven’t heard something sound so loose, so drenched in slothfulness and yet so powerfully dramatic. “Blaaaaack womaaaaaan, won’t you take this blue boy hoooooome!” Chills…

Anyone who’s into the stoner sound would enjoy this. I find it to be a doom album that most successfully incorporates a classic blues sound without muddying up the emotive command that sincere blues music incorporates. This is Black Sabbath meets Buddy Guy. This is Electric Wizard meets Robert Johnson. This is apocalyptic slabs of metal meets rickety porch Delta twang. It’s a broken man’s broken heart as he gazes into the swampy brown waters of the Styx. And it’s glorious.