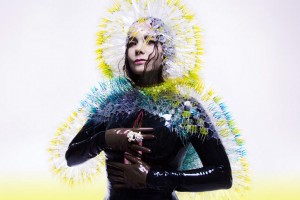 Bjork is a presence in the music world that few have matched. Somehow she’s managed to gain major acceptance in the pop world while leaving her standings in the underworld community untarnished. And this was done through an equal respect for pop music’s narrow boundaries and the wide palette of art music. She scored high charting records with a Picasso imagination. It was music for dancing and for headphones. But the marriage between straight and strange sort of fizzled after the 90s. Over the last decade, Bjork’s ventures have taken her further from her mainstream foundations and deeper into strangeness, and the results have been hit or miss. Medulla was the pinnacle of vocal experimentation. Biophilia was a mess of disorganized minimalism.

So where does this put Vulnicura? It’s right smack in the middle. It’s as pretty and grand as it is pointless and wearisome. And the deadlock between pros and cons puts this album right at average level for me. Let’s start with the positives…

Bjork has ventured back a bit into her Vespertine period as far as incorporating symphonic airiness. And Bjork doesn’t deter from this approach throughout this album’s duration. The strings are recorded and performed beautifully, with melancholy orchestrations favoring a minor approach. The darker ambience of this album can only be expected from an artist who majors in dealings of the heart. The heart is filled with epic tales of longing, but remains an organ of darker secrets. The stringed instruments that play its soundtrack need not be so sweet and happy, but somber with an anxious tinge. These are songs of a classical sadness.

Speaking of sadness, the lyrics do poetic work with an age old pop concept – the ruins of a relationship. Bjork approaches this conventional topic in an inventive way by writing each song as a separate notch on a timeline that stretches from months prior to the breaking point of a recent relationship. The lyrics are top class, and it’s nice to know that they haven’t lost any potency over the years. These words could be her most naked and honest to date.

All the characteristics of a modern day Bjork work are here. Musical arrangements are loose, unpredictable and revolve almost exclusively around Bjork’s rambling vocal delivery. There’s plenty of weirdness for the sake of being weird. There’s Bjork’s absolute refusal to pen a legit pop hook, even though plenty of opportunities are present. And even though I wish that just once Bjork would snap out of her desire to be bizarre and write a catchy line like she used to, my biggest problem with this album is a lack of dynamics.

The music is symphonic airiness and soft electronic percussion for a little under an hour. And the pace of this music never works its way out of awkward moodiness. It’s as if Bjork is grieving to herself while fucking around with an electronic drum kit. And somewhere, a string orchestra is providing musical accompaniment to the clangor of Bjork moving her stuff out of her boyfriend’s house. No musical moment leads to any kind of progression in the concept. And by the time things finally seem to be ramping up in the last couple songs, it’s way too late to leave an impression. I feel Bjork just took an opportunity to bitch to her fans about her love life. The music was only written to keep this release out of the spoken word section in music stores.

Frankly, I find this album to be pretty and lazy. It has Vespertine’s epic breadth, but Biophilia’s misdirection. Bits of endearing moments go nowhere. Boring moments receive way too much play time. And honestly, I have a hard time even paying attention for the full hour. My respect for Bjork was her ability to be off the wall AND emotionally stirring. I miss songs like “Bachelorette,” “Oceania,” “Isobel,” and “Pagan Poetry.” Those are masterpiece songs of drama and imagination. These are mopey tone poems that dribble like the whimpering remnants left after a good crying session. This release would have been 4 out of 10 for me if the lyrics hadn’t pulled their end of the weight so gloriously. And so, I give it a strong 5 out of 10 – nothing more than average.