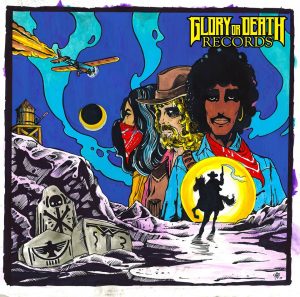 Hearing Live and Dangerous literally changed my musical life, so when I saw that Glory or Death Records was putting out a compilation of Thin Lizzy covers….  OMG.  Featuring a couple of my Psycho Las Vegas favorites, Mothership and Goya, the first LP of Bow to Your Masters Volume 1 has just been released via digital download with vinyl and CD available for pre-order.  Physical options are a little pricey, but the download is just ten bucks — a worthy diversion of Friday night beer money considering the effort it must have taken to wrangle all these bands, get the tracks recorded, and then master everything, etcetera, etcetera.   Some versions stick pretty closely to the originals, like White Dog’s “Don’t Believe a Word.”  (Hey, if it ain’t broke, don’t fix it.)  Other bands put more of their own stamp on the tunes, like Goya’s interpretation of “Cowboy Song.”  Holy.  Shit.  Just buy this.

Collaborating is all the rage, which leads us to Totems, an upcoming release from Slomatics and Mammoth Weed Wizard Bastard.  The bands put their heads together to write the material, so the record is more seamless than I’ve come to expect from splits.  MWWB somehow manages to be “spacey” and chug forward at the same time, opening Totems with twelve-minute “The Master and His Emissary.”  Slomatics start their half in outer space with “Ancient Architects,” then break things up with some nice piano.  But don’t get too comfortable — it’s just a brief respite from fuzz-worship. MWWB’s vocalist lends her airy croon to the final track, “Master’s Descent.”  (Apparently the Slomatics drummer plays on the MWWB track “Eagduru,” but I wouldn’t have known that without reading this interview on Outlaws of the Sun.)  Anyhow, if you want to take a trip to Arrakis from the comfort of your sofa, pre-order Totem from Black Bow Records today. 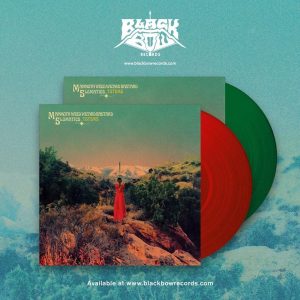 What are some of your favorite artistic collaborations?  Comment below!

Thanks to Dewar PR.