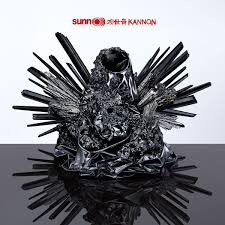 Sunn O))) is an acquired taste. You either get it or you don’t. I happen to get it, and enjoy it immensely. But in order to really enjoy this music, you need to have an appreciation for music in the textural sense. Sunn O))) deals with musical drones. Drone music doesn’t exist within the regular confines of music as is commonly understood. There’s no obvious sense of rhythm, melody or harmony. It exists as an ambience – something that colors a space, aids in meditation and creates a sonic landscape. Examples are Gregorian chants, minimalist classical pieces by the likes of John Cage and Brian Eno and even horror movie soundtracks. Sunn O))) happens to deal with drone metal. They take the fundamentals of drone music and turn up the fucking volume.

They’ve shopped themselves around quite a bit, dabbling in many side projects with artists as diverse as Boris, Merzbow, Xasthur, Scott Walker and Ulver. They manage to fit themselves into different genres easily, since they deal predominately in background ambience. But I’ve always found their own albums to be the most interesting. Monoliths and Dimensions is absolutely celestial. Black One is downright terrifying. And Kannon just might be their most accessible release.

Kannon plays a great middle ground. I actually find it to be the best possible introduction for people who want to explore their music. It consists of three tracks that each clock in around the ten minute mark, so it isn’t an exhausting listen. It focuses primarily on the foundations of their sound. Guitar and bass, each at incredible volume, screech, grind and wallow in tremendous waves of distortion and reverb. This is Sunn O))) at their most stripped-down and the closest they might have ever come to sounding like traditional metal music. The pace is slow but not agonizingly so, and the riffs are somewhat discernible.

Vocals are a mix between black metal howls, death grumbles and Oriental chants. And it’s the vocal patterns/styles that define this album as a fresh volume in the band’s catalog. There’s a Buddhist sort of mysticism coming through here that I haven’t heard from the group before, at least to this level. The chants and subtle major notes that ring high through the doom carry this album out of hellish depths into relaxing territories. It’s as if through the painful transition of death, the whiteness of enlightenment peaks like rays of sun through a black shroud. The term Kannon represents a characteristic of Buddha named “Goddess of Mercy.”  And it’s clear the band’s interest in Eastern philosophy and religion is stamped all over these nameless pieces.

Three traits make this an approachable album for first-timers. It isn’t very long, it isn’t insanely abstract and it manages to express the group’s light and shade with equal balance. And for long-time followers, it’s nice to be given an album that we finally don’t need to work too hard to enjoy. It encompasses everything we’ve loved about the group from the past while introducing an Eastern flare in the most seamless of ways. Perhaps it’s a little too easy to like this. Only time will tell how it will stand up in the middle of such a large and multifaceted discography.