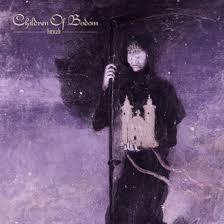 Much like Soilwork, I’d lost touch with Children of Bodom over the last decade or so. Are You Dead Yet? had left me underwhelmed, possibly due to the album’s overbearing production and slouching weight. The band seemed like they were experimenting with slower tempos and beefier riffage, pressured perhaps by the metalcore craze that gripped the metal industry in the early 00s. I wasn’t interested in yet another Scandinavian band attempting to compete with the breakdown wars happening in America, and so abandoned them.

I only returned to Children of Bodom because I wanted to cover some high-profile metal releases this year. I expected a decent but phoned-in collection of songs from a band on a dangerous path to irrelevance. Hexed proved that to be false. It’s nothing new or entirely fresh, but it brings the energy and the fun – things I thought the band were close to sacrificing the last time I left them.

For those unfamiliar, a random clip from Hexed (or any other Children of Bodom album, really) would lead one to believe the band are just a serrated version of power metal darlings. Icy keyboard dressings, solos, and dramatic stabs sound a bit cute on a song like “Hecate’s Nightmare.” Give the song complete attention and you realize the darkness behind the power metal superfluities. Twinkling keys in the intro aren’t Sonata Arctica wish-upon-a-star cheese, they’re the introductory notes to a psychopath in your bedroom while you’re sleeping.

Keyboard flourishes mixed into thrash extremity is what makes a Bodom riff unique, and there’s no reason for the band to deviate from it. It’s that campiness that turns a gore movie into a rager, a horror story into a standing ovation for the monster. Just a little bit of lightheartedness in the breakneck punch of song like “Kick in a Spleen” makes a horns-up, bat-to-the-mailbox childish delight out of a murderous night.

Bodom’s best musical trait is suspense. The band knows how to keep the listener hanging on every little changeup, rolling along from riff to riff with wider and wider smiles because this Z28 Camaro keeps accelerating back and forth across the lane lines of a dark highway. “Glass Houses” keeps the hits coming with renewed class and uncompromising speed, ripping with alcoholic fury like a knife fight in the snow. The title track is a thrash epic, zooming out that knife fight scene to reveal a sweeping backstreet battle. The action changes scope, but never stops.

Children of Bodom are an easy listen, and dare I say a great contender for gateway metal band of choice. Anybody who’s looking into easing their way into extreme metal would likely take to this band’s melodic focus, tongue-and-cheek charisma, and excitable pace. Hexed is just another Saturday night kegger at a public park in Espoo. There’s nothing new in your glass, but nobody has a right to complain about the same old-same old when you’re keeping warm, stumbling happy drunk through every damn weekend in the endless Finnish winter.