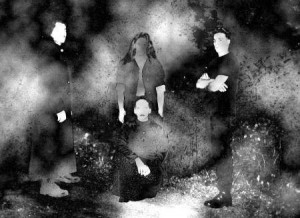 From 1994-2003, gothic metal band Khasm was a force in the Connecticut music scene.  As Ryan Bair wrote last year, their “enthralling blend of dark imagery and theatrics, heavy and melodic compositions, and cerebral concepts… introduc(ed) our local audience to then-unheard-of elements that were popular in European metal.”  For almost a decade, they were riding high — but then, like most bands eventually do, they broke up.

Twelve years later, Khasm is emerging from hibernation with a much-anticipated reunion performance, at the Outer Space in Hamden on March 27.  Alternative Control talked with bassist Keith “The Wretched” Zalinger about the band’s past, present, and future.  He was also kind enough to provide the blog with two free reunion show tickets to give away — enter to win using the Rafflecopter widget at the end of the article!

Why did Khasm originally disband in 2003?

There were probably a few reasons, including the fact that I’m a cruel taskmaster, ha-ha. The primary cause was that everyone had a lot of other things going on in their lives, and we felt it was time to put Khasm in the ground. As you can see, some things don’t know how to stay dead.

What prompted you guys to plan this reunion show 12 years later?

I had been hearing about a reunion for about 5 or 6 years, so I thought it was all one elaborate joke. And then one day there’s this article about Khasm by Ryan Bair on this very website. At first I wasn’t sure if he was talking about the same band. If you’re looking for someone to credit, he deserves a good portion of it. After that point, interest started to develop. I also think that we all realized that there are limits to how long a band can sit around before someone moves away, has more kids, gets abducted by aliens, etc. – so it may well have been now or never. 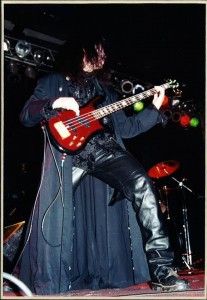 What is YOUR proudest moment in Khasm history?

There are quite a few. Opening for Testament in 2000 and getting asked to play longer and most of the crowd not wanting to execute us, playing with so many of these great bands in Asbury Park, NJ and Milwaukee (Opeth, DRI, Soilwork, Shadows Fall, Mastodon, Anathema, and dozens more), walking off stage after playing in Milwaukee and having someone from a European magazine waiting and screaming “I’ve GOT to have an interview with your band!” – and let’s not forget the upcoming show, if I can say this without sounding overly stupid. We didn’t think this was going to happen at first, so I don’t want to understate the importance.

You have a great opening lineup for the reunion show – how did you choose those particular bands?

This was a bit of a problem, albeit a good one. When we started putting this show together, we considered all bands in the scene old and new. The good/bad news was: there are so many talented bands in the CT/NY/NJ/other scenes to choose from. We originally ended up with a list of over 25 bands. Some had to decline due to scheduling conflicts. We did ask Divinity Destroyed (NJ) to get back together for this one as well, but they unfortunately had to decline as well. After several sessions of arguing back and forth, fistfights, and sword/pistol duels, we decided on the four who will be playing: Curse the Son, Lyra, Priapism, & Acius.

We also wanted to make sure we had a good mix of bands for this show. There was a good amount of thought that went into this. While you might see some overlap, I doubt anyone who’s conscious at this show could confuse anyone on this bill with each other. Lyra may well be one of the few (if not only) symphonic metal bands in CT. Priapism and Acius set everything on “destroy,” yet they have very different approaches. Lyra/Priapism/Acius have a level of technical proficiency I couldn’t achieve even if I recorded someone else’s parts and faked it on staged, Curse The Son are the easiest way to get high without taking anything…and then you have Khasm, about which I could ramble on for hours, but I only do that to people I don’t like…

How do you think the Connecticut music scene has changed since Khasm’s first go-around?

I think things have improved quite a bit, especially for metal. It’s easier to get music to people, and to spread the word about shows. It’s easier to get bands involved in shows on a shorter timeline. You have a lot of local websites and internet radio that cover the scene, which we also had back then towards the end, but NOT to this extent. Is it perfect? Of course not, and it likely won’t be anytime soon…. but I’m accustomed to a lot worse. Keep in mind, you still have to promote (off-line and on), and it’s in a band’s best interest to give people a reason to go. I’ve been of this opinion since the Kennedy Administration. Regardless of how people like to portray it on Facebook, no one’s obligated to go out and listen to music. They have limited time and money, so I do not take that lightly, not for one minute. 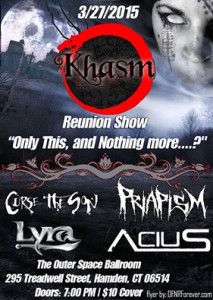 Is there a possibility that the band will continue after this show?

A possibility? Absolutely. While nothing’s been decided either way, I think there’s definitely more that can be done with this band. I’ve already told them I’m in if they decided to continue. That said, I think there will be a lot of logistical things to work out if we decide to move forward. Everyone has jobs, kids, side gigs, and who knows what else. If you are reading this and feel like exerting your influence to persuade Khasm to continue, I suggest you head to the Outer Space Ballroom on March 27th…stand directly in front of us…and yell at extreme volumes during our set.

…And you could do that for FREE if you win!  Enter using the widget options below.  Winners will be contacted via email on Tuesday, 2/17 and will have 24 hours to respond.