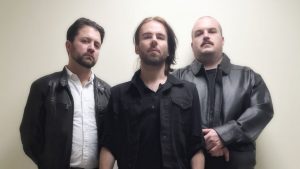 Kayo Dot is more than a little confusing. They’re a group that sounds like you shouldn’t take them seriously, because they’re strange almost to the point of mockery. But beneath the sheer alien nature of whatever genre of music they tackle at any given time, there’s a core of uniqueness that’s unparalleled. In a musical age of copycats, they’ve separated themselves almost completely. Sure, they can be labeled any number of things: metal, chamber music, synthwave, avant-garde jazz, minimalist etc. But no label tells the full story. In my music collection, their albums are organized into the category (along with Ulver) I call “unclassifiable.” All that can be said about them for sure is that they’re shape shifters, experimental to a fearless degree and pretty hard to wrap your head around. They go out of their way to make music that’s dissonant, unpredictable, stifling and articulate. At their loudest and heaviest, they’re almost a musical violation. But at their gentlest, they’re like the comedown after a horrific nightmare – soft and bizarre and quietly unhinged.

Toby Driver is the guy in command, being the band’s leader and chief composer. Although it’s clear that he has a decent voice, his singing technique doesn’t seem like technique at all. His voice kind of floats along in a musical space of its own. It dives and soars at unorthodox moments, or wavers around in midrange completely cut off from what the other instruments are doing. His voice is also the only reoccurring and steady kind of timbre throughout Kayo Dot’s discography. Compositionally, each Kayo Dot album presents the reoccurring themes of dissonance, open space and ethereal tone. But the instrumentation and compositions are so varied, that the four albums I’ve chosen here could warrant their own in-depth overview. But for the sake of keeping this article at reasonable length, I’ll summarize the best I can.

This is Kayo Dot’s first experiment in the synthwave/darkwave genre. In an interview , Driver listed 80s darkwave bands, Type O Negative, and Peter Gabriel as particular influences. The mood is mysterious and foreboding, with a sordid mellowness like the ruins of a dead city. Songs like “Offramp Cycle, Pattern 22” gallop in an anxious synthesizer wash like the soundtrack to a dystopian highway drive. “Spirit Photography” lazes in a painkiller saxophone melody, sleepy and sleazy like the foggy and dejected back lot of a late-night jazz club. The lyrics are filled with strong nocturnal and urban imagery. The sound is lush, romantic, gothic. Although the album is often content to wander about in a synth world of Blade Runner smokiness and 80s echo, there are intense krautrock freak-out moments peppered throughout. It’s one of my favorite albums.

This album is one serious journey into the abyss. And the abyss isn’t quiet either. The music here is a monster hybrid of jazz, extreme metal, psychedelic dark noise and dissonant chamber music. And at such an extensive clock time of 100 minutes, it’s best to digest this thing in smaller doses. But those willing to subject themselves to such a bewildering and intense experience will find a lot of entertainment here. This is music that’s incredibly dense and demands your complete attention. There’s moments of unsettling ambience; melodic and ghoulish prog riffs; cacophonous swells of distortion; nocturnal washes of piano, synth and woodwind, and moments of what I can only describe as pure evil. Darkness and dark music is the overall theme here, but without the cheesy and overdramatic trappings that usually turn dark music into something emo and corny.

If you want to get into albums like Hubardo but don’t want to invest that much time, then the Gamma Knife EP is another option. It has a similar sense of danger and darkness, but the fusion of jazz, metal, noise and classical music is a bit more subdued and easier to swallow. In fact, moments on this EP could even be called beautiful in a gothic and mystical sort of way. The church bells, strings and Driver’s melancholic chants on opener “Lethe” is one of Kayo Dot’s quietest moments, and absolutely gorgeous.

This is one of Kayo Dot’s most sprawling and doomy works. It runs a lot like a post rock album, almost every song building to intense crescendo before breaking off into a haze of chamber music heroin or extreme metal crack/cocaine. In “Gemini Becoming the Tripod”, lazy and majestic swells of guitar and strings cramp up into a psychedelic freak out of electronics before deteriorating into a rambling vocal line over dissonant doom jabs that slowly, painfully explode into a violent black metal epilogue. “__ On Limpid Form” starts off its 18 minutes of madness as a sarcastic and mocking sort of sadness, builds into a ballad of sour sentimentality and sleepy jazz horns, then spends the remainder of its run time pummeling the listener over and over and over again with the loudest and slowest and nastiest screams and crashes of sludge metal I’ve ever heard. The repetitive tribal drumming only adds to the chaos, molding the dissonance into a demon invocation. It’s powerful stuff that requires a lot of patience. But it’s a listening experience like no other, and an experiment that laughs at any so-called limitations in extreme music.