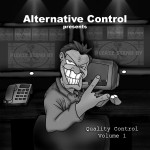 As car CD players are become a thing of the past and boomboxes take their place in ancient history, Alternative Control has no choice but to forge into the future.  Below, please find FREE DOWNLOADS of tracks 13-17 on Quality Control Volume 1, along with information about each band.  Thank you for supporting local music!

Mantyhose’s current configuration has been delivering spacey, heartfelt rock to Stamford audiences since 2011. The members are figures in the local open mic scene, helping other musicians share what they love.  Visit them on Facebook to hear more tunes!

14.  Perfection in Life by Crossing Rubicon

To find out more about these bar-raising rockers, read here and here.

Who said Fairfield County wasn’t brutal?  Read more about Warstrike 666 here and get into the brutality on Facebook.

16. FDR Drive by Left in the Attic

This New York power trio has a bad-ass attitude and the songs to back it up. Download “FDR Drive” for your road trip mix and read more about Left in the Attic here.  (And visit them on Facebook!)

Under his “nom de guitar” The Danbury Lie, composer and multi-instrumentalist Rob Loncto has released his fourth album in less than a year, titled ?. The haunting closing track, “In Time,” also serves as the perfect final number on Quality Control.

Remastering by UP Recording Studio.