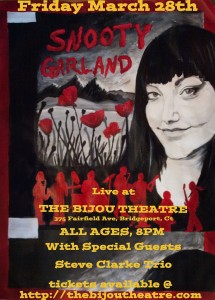 Many of Alternative Control’s readers will know Mark Lyon as the guitarist in New Haven tech-death band Xenosis.  But did you know that he also plays in a nine-piece soul band called Snooty Garland?

Mark introduced local metal fans to Snooty Garland’s bombastic frontwoman Elizabeth Dellinger in August when she took the stage with Dio tribute Last in Line at the Chords for a Cure benefit concert.  Dellinger, a.k.a Lady Elizabeth, was a game-changer at that show, just as Snooty Garland plans to change the game by blending art forms at their upcoming filmsical, March 28th at the Bijou Theatre in Bridgeport.  Alternative Control talked with Lady Elizabeth about the Snooty Garland’s music and what they have in store for audiences at the end of this month.  Here’s some of what she had to say:

Jessie: This is of a personal interest – how do you guys manage to play so many gigs with such a large band??

Lady Elizabeth: I just let them all motorboat me and they do whatever I ask.

J: Tell me about you background.  Are you from Connecticut?  Did you go to school around here? 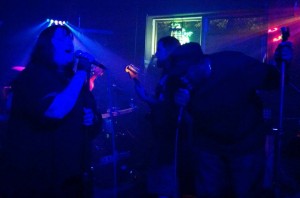 Lady Elizabeth, Mark Lyon, and Cuality Council bringing down the house at Chords for a Cure.

LE: I was raised in Wallyworld, CT.  I went off to NYC for higher education but rarely made it to class because the city itself taught me all the lessons I thought I wanted.  I returned to Connecticut a few years later to have my son and figure out my next move.  I was supposed to stay in CT for a few months…. It has been years.  Oye.

As a young single mom, I continued to make music and a living as a studio singer and songwriter.  I sang in every genre, in every language, from filthy basements to the hit factory.  I made slews of my own records when I could barter some studio time, but never felt they expressed the real music in me.  Only recently did I find the music family to illustrate the full color of my songs.  I love those Snoots.

J: Speaking of the Snoots, do you guys have an album out yet?

LE: We are so ready to make a record!  Since we just officially formed in August, our shows have been the best way to experiment with arrangements and for getting familiar with each other.  There is so much musical diversity among us.  Each person in the ensemble is a strong solo artist.  When we shine together it’s a celestial type of trip – we just beam like crazy folk with big smiles on our faces.  Lately, I’ve been enjoying writing new material with Mark Lyon (guitarist), Corey Claiborne (bass), Dexter Pettaway (drums), and Nick Biello (sax) – and I have more writing sessions in the works with Ed Soufer (guitar) and my longest-running music mate, Dave Davis (sax).  We have a live album to release first; then we begin recording our first full length studio project over the summer.

Sell your beats online at ReverbNation.com

J: What’s a filmsical?  What can people expect for the musical and visual aspects of the 3/28 show?

LE: Music + Film = Filmsical!  Our live musical performance will interact with a live visual performance by a talented artist, Dustin Demilio.  He uses lights, projections, and film among other mediums.  Dustin is a Black Rock native and we are thrilled to be working with him.  As the Bijou is the oldest film house in the nation, I’m really randy over using that gorgeous movie screen behind the stage.  I shan’t give anything else away, but people should prepare themselves for beauty on many levels.  We will also be performing the show in 432 HZ, which is a healing sound frequency.  (Editor’s note: In the U.S and U.K., instruments are usually tuned to the frequency “A 440,” so this means that the pitch of all the instruments at this show will be slightly lower than normal.)  Music is a powerful antidote and Snooty Garland is a revolution of willful musicians on a mission to heal with the power of soul.  Get Snooty!

If you want to see Lady Elizabeth, Metal Mark, and the rest of the Snoots for this genre-melding performance, tickets are available online at Vendini.com.  For more information about the show, also see the Facebook event.  And to keep track Snooty Garland’s latest happenings, find them on Facebook and Reverbnation!