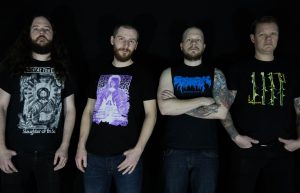 If Denver doom quartet Khemmis made waves with their 2015 debut, Absolution, their sophomore album Hunted was a tsunami.  Now on the eve of their third release, Desolation, vocalist and guitarist Phil Pendergast talked with Alternative Control about the band’s songwriting, imagery, and the ideal of “making it.”  Weekend warriors of heavy metal, read on…

Thanks for taking some time out for Alternative Control!  My first question is a cliché one, but I really want to know — what does “Khemmis” mean and how did you come up with that name?

Phil (Vocals/Guitar): It is hard to come up with a band name that is relatively simple these days that hasn’t already been taken. We kicked around a bunch of ideas but nothing stuck and Khemmis was just a word that Dan had thought looked and sounded cool years ago when he took a literature class in college. It is the Greek name for the ancient Egyptian city of Akhmim, where Isis gave birth to the sun god Horus in their mythology. I think it is kind of cool as a little throwback to the Egyptian themes Iron Maiden had in their art.

What is your songwriting process like?  And how do you account for being able to put out three great albums in less than four years??

Phil: Either Ben or I come up with a series of riffs that seem to go together and maybe some guitar melody lines, and then we see what everyone thinks at practice. On this album, especially, we basically tore these basic parts apart and really collaboratively arranged the songs, where a cool drum part seemed to lead somewhere new or something. So we’d write a new riff that would capture the feeling that it felt like should come next. We really try to think of them as songs that each take you on a unique journey, rather than just a collection of riffs. I think that is what people have really grabbed onto with us, even if they don’t realize it. As far as 3 albums in 4 years, that is a pretty slow pace for the best bands of the 1970s.

Is there a storyline that connects the albums or an overarching lyrical theme?

Phil: Not really an overarching theme, but personal experiences of loss, regret, terror, and anger are expressed in all of our lyrics. I try to make them allegorical enough that it isn’t like a diary, and for Hunted and Desolation I tried to use similar symbols and imagery so that each album feels cohesive and unique. But I also like to include callbacks to previous albums and themes. It is fun for me to weave this sort of lyrical tapestry across records that I hope is rewarding for people to dive more deeply into if they want. Lyrics are important to me, and big thanks to Ben for collaborating so much on them for this album.

What was it like working on Desolation after putting out such a critically acclaimed album in Hunted?  Did you feel a lot of pressure or not really?

Phil: We certainly knew there was pressure to deliver something that would live up to it, but we really tackled that challenge by choosing to emphasize different musical influences on this album than on Hunted. We had no interest in writing the same record twice and want to grow as artists and show new sides of ourselves with each album.

What music/bands/literature/art inspires you creatively?

Phil: On Desolation we drew a lot of inspiration from Mercyful Fate, Celtic Frost, Immortal, Judas Priest, In Solitude, and Metallica, shooting for a more broadly “metal” and extreme sound than we have before. Personally I was listening to a lot of Symbolic by Death and Like an Ever Flowing Stream by Dismember at the time, too, and their influences crept into some riff and arrangement ideas as well. I was also reading a lot by the author Dan Simmons at the time, and his book The Terror (which I think is a show now? I haven’t seen it) and its treatment of Christian and Inuit religious iconography was an influence on some of the lyrics, notably in the song “Flesh to Nothing.”

Tell me about the band’s album art, which is by Sam Turner.  How did you guys get together with him?  What is the band’s role in the visual concept?

Phil: Sam is such a badass artist and we are honored to work with him. We wanted to work with someone who could pull of a Frank Frazetta-esque style, like on early Molly Hatchet and Nazareth album covers, and he is a friend and local guy who just nails that style. He did an early t-shirt for us that featured the wizard, who became our mascot, and he just crushed it so we came back to him about doing the album art. I generally have drawn ideas/rough drafts for the art, and then he just runs with the ideas and improves on them in every way. It is great and we collaborate a lot together on what images make it in and try to subtly tie them to the lyrical themes.

You guys all have very legit real world careers — “non-disposable” as one interviewer called them.  Can you talk a little bit about your regular lives and how you balance that with suddenly being a famous metal band?

Phil: Honestly I’m not so sure it is that different for us compared to anyone else who is a little older and has a family but still plays in a band. We just have to be choosey about which opportunities we take, and we make sacrifices to make the ones that are worth it happen.

Speaking of real world jobs, I read that (drummer) Zach is a brewer — will there ever be a Khemmis beer??  What kind of beers do you guys like?

Phil: Zach actually did a one-off beer for a very small brew festival once upon a time that he reluctantly called “Ash, Cinder, Smoke,” a track off our first album, which was some kind of farmhouse beer with smoked tea leaves or something. But I don’t think he has much interest in really doing one for us. He wants to celebrate his inspirations with his brewing rather than just promote himself and his band. We all have different beer preferences and they change with the seasons but right now I’ve been drinking a lot of pilsners, hoppy wheat beers, and sours.

And for the sociologists in the house — what academic observations do you see in today’s metal scene?  Will there be “metal sociology” articles coming up in any scholarly journals soon??

Phil: I actually just finished my Ph.D. in May, so I’m done “Sociologizing” (not a real word) for now and just work a regular job, finally. I was always more of a stats guy anyway. Ben’s dissertation is shaping up and does pertain to art, more broadly, and metal, so maybe you actually will see something like that come up in the next two years or so.

Speaking of sudden success coming after you’ve already established yourselves in families/careers/real grown-up shit, what were you doing musically prior to Khemmis?  Was there ever a time that you thought of calling it quits or letting metal fall by the wayside?

Phil: The other guys all have more experience playing in “real” bands than I do, but I’ve played in more informal metal bands in the past that never professionally recorded anything (though I have a couple homemade CDs and tapes!) and just played house shows and stuff. I didn’t intend on playing in a band anymore when I moved to Colorado for grad school, but found that I was writing a bunch of riffs and was getting depressed and really starting to miss the camaraderie of getting together with some friends and just forgetting about your bullshit for a few hours to play really loud, drink beers, and make “art.” At this point I really love these dudes and what we are doing together and it is one of the most rewarding things I’ve ever done in my life. No bullshit: It gives me purpose. I don’t see calling it quits anytime soon.

What advice would you have for all us weekend warriors trying to “make it”?

Phil: Don’t try to “make it.” I think that way of thinking, at least initially, will force you to do things that are unnatural to you. Strive to make music that you personally find is rewarding and something that you’d want to listen to, especially if there aren’t bands already doing exactly the thing you want to hear. Develop yourself as a songwriter, try to think outside the box, and practice and strive to get better. Odds are that if you are really honest with yourself and what you want, there will be others that resonate with that vision, and if you have some basic level of skill that makes you capable of pulling it off, people will probably listen. You don’t have to be amazing at your instrument, I am living proof of that.

What are some under-the-radar bands out there right now that you would recommend to our readers?

Phil: Man, there are too many to mention. Check out all the bands on our U.S. label, 20 Buck Spin; Tomb Mold, Spirit Adrift, Vastum, Mournful Congregation, and Magic Circle, for example, are all really badass and different. We have a lot of great local bands in Denver like Blood Incantation, Primitive Man, Of Feather and Bone, Cloud Catcher, In the Company of Serpents, Wayfarer, and Spectral Voice that are amazing. I discover new stuff I like all the time by just buying records that I see with cool album covers, like this new record called Heirs of Sisyphus by a death metal band called Gutter Instinct that totally rules. It doesn’t always work, but sometimes there are great rewards to taking a chance on albums like that.

Thanks for the interview!