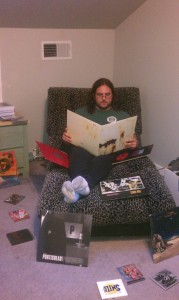 I remember it like this: On one freezing and blustery winter afternoon, I took my twenty dollars and folded it into my pocket. After layering on a bunch of sweaters under my hoodie, I grabbed my discman and headed out the front door. I was still in high school at the time, and didn’t have a car. I walked up my street during one of the coldest days of the season, for about ¾ of a mile to a local record store. The place was called Disc & Dat (which I believe is still open in Bethel), and was known as being a really great spot for music collectors who were searching for bootlegs, or more obscure artists and albums. I perused up and down the store, seeking out something worthy of the hard-earned twenty dollars I made at my gas station job. Being that I had only twenty dollars, I had to make a heavy decision on what music I was going to take a chance on. Luckily, they had the Pink Floyd album “Ummagumma” for sale. Being a Pink Floyd fan already, and not having heard this album yet, it was a no-brainer to purchase it. I handed over the twenty bucks, talking with one of the owners about “Ummagumma”, and other recommendations he made to me, based on it. I left the store, promptly put the album in my discman, and enjoyed the freezing walk home with a new CD to listen to. The music was unique, confusing and unlike anything I ever heard – I liked it. I liked it at first listen, and over time I learned to love it.

What’s the point of this little story? It’s just a simple piece of nostalgia. It’s an example of how the process of buying and obtaining music has changed drastically. It’s never been easier than now to practice instant gratification when it comes to getting the things we want. And yet, I feel that the ease and luxury we’ve given ourselves has dwindled our ability to appreciate what we get, and this is especially true with music.

Go back in time, and think about the days before you had internet downloading and Ipods. Think back before you even had a car. Perhaps you were still in school, had a minimum wage job and just a bit of pocket money. Obviously, like most teenagers you had a love for music. Naturally, some of this earned money was going to go towards buying the music you like. Now, just think about the little ritual you had to go through in order to get that music. Perhaps you skipped school and walked to Sam Goody; or maybe you took a bus; or if you were lucky, you had parents that would drop you off and pick you up from the mall. Whatever the method was, you worked to get to that record store. Perhaps you spent some time walking up and down the aisles, flipping through records or CDs. If they didn’t have the one you wanted, you almost always walked out of there with something else; something you felt like you could risk your small amount of money on.

Let’s say that you bought something you never heard before. Back then it was easy to be in the dark, there was no way the album leaked ahead of time. You put it in your stereo and maybe at first you didn’t like it. But hey, you spent good money on it didn’t you? Fuck, you’re going to pour all your energy and patience into liking this music, because you worked for it! Besides, you might not have enough money to buy another for a while! And many times, that album you hated at first grew on you, didn’t it? Maybe, just maybe, that very album has since worked its way into your personal top ten. I know it’s happened to me.

Flash forward to the present. Now we have the ability to download any music we want for free. The possibilities are endless and we can do it all from our home computers. No more little rituals, no dollars spent and no more blind purchases. In many ways, it truly is the best way to build your musical library. The internet in fact has changed the entire outlook of the music business, and has really done a lot to spread around tons of obscure and imported albums that we would have never been able to get our hands on otherwise.

But, you have to ask yourself a question. With all this easy and instant gratification, do you still give an album the same amount of patience and devotion that you used to? When you take out the work and the money spent, it seems really easy to listen to a couple of tracks off a torrent, and then throw it away if it doesn’t immediately grab you. A teenager could hear about “Dark Side of The Moon”, “The Downward Spiral” and “Led Zeppelin IV” off the internet. He can download them easy enough and give them a listen. Because of the layered production and complex songwriting on these albums, chances are he won’t get the full effect from one listen alone. What’s really keeping him from just trashing it and going on to something else if he doesn’t like it? Just think of all the music that you love and hold dear, and think of just how different your life would be if you hadn’t given these albums the time and the dedication they needed to appreciate them. I certainly have a couple of life-changing albums in my collection because I devoted time to them, as I’m sure most of you do as well.

The album or CD as a tangible thing is dying. A generation of kids are growing up into a world where all their media is given to them by just a few clicks and into a tiny computer. Sleeve designs and beautiful album art like the cover to any Yes, Iron Maiden or Pink Floyd record are reduced to tiny icons. Lyric sheets and linear notes are produced digitally, if at all. And I’m really wondering if I’m the only one that’s saddened by this. I feel that an album in itself is a complete work of art. It should be listened to and appreciated from start to finish. The artwork, the lyrics, the band photos and the linear notes are all part of that package, and part of the enjoyment. Buying something tangible, looking through the sleeve or the booklet as the music plays, following along with the lyrics – that’s what enjoying music is all about for me. It’s like taking a little journey. If you take that ritual away, what’s stopping the album concept from disappearing entirely? I’ve seen it myself, many kids could care less about buying the package. Why would they when they can download it for free? And hey, while they’re at it, why download the entire album when they only really heard one song? They’re not going to waste their time on music they don’t know. That’s too much like work, you know?

The downfall of record stores and album buying has also taken away the intimacy of musical recommendation. Sure, the internet is filled with websites offering juvenile reviews on just about any album you heard of. Sites like amazon.com can estimate your musical recommendations based on the products you buy. But none of this stands up against the influence of a personal recommendation made by a record store employee, or a friend, or simply some stranger in the store. I remember having long conversations with record store owners and music fans about what albums I would be into based on my tastes. Because I purchased “Ummagumma”, the owner of Disc & Dat suggested a bunch of artists such as Captain Beefheart, Nektar and Tangerine Dream. Because of his suggestions I bought a couple albums from these artists and cherish them to this day. How many times have you bought something based on a personal recommendation? How often has this happened in a record store? I’m sure you can name more than one occasion.

This has certainly ended up being a rant, and I apologize. And despite all the negative things I’ve said, I admit to being a bit hypocritical. I own an Ipod, and when it comes to convenience, you can’t beat it – I admit this. In fact, there are many pros to internet downloading and purchasing, and these are fairly obvious. But I do feel that with this rise in technology, and the new possibilities towards instant gratification, we’ve lost a lot of our connection and appreciation for music. Sooner or later, I assume the way we listen to music will completely change. Without working for and earning what we want, we won’t have the patience to absorb ourselves in it. Without absorbing ourselves, we won’t connect to it with as much depth of feeling. Without this depth of feeling, music will deteriorate into something to just sing and dance to; something to put on in the car so we don’t have to listen to the wind on the highway. Am I being a little too melodramatic? Yes, perhaps. But this is something I’m extremely passionate about, and I’d be sad if it suddenly went away.

What’s the point of posting this rant? I just wanted to raise awareness, see if anyone else felt like I do, and urge people to support their local record stores and music dealers. Don’t allow the ease and luxury of downloading destroy what I believe is an amazing artistic statement: the album. Put some money aside, visit a store, buy something on a whim and take it home. You might not know the experience that you’re missing.

Tell us your record store tales — leave a comment or email us!