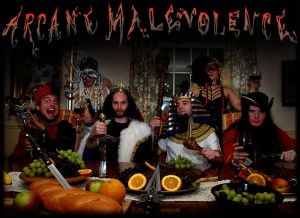 I don't know any of these people, at all... Photo by Heather Elizabeth Clegg.

You never know what you’re gonna find when you’re out there “supporting the scene.”  This past weekend I found two good new bands and a bad hangover, and now I’m gonna tell you about it.

Friday night it was Arcane Malevolence and Symphony of Malice at Seaside Tavern in Stamford.  I “support” Arcane pretty often – and by support, I mean I go watch my fiancée play guitar and make sure that other girls don’t watch him too closely.  Because of the conflict of interest, I won’t tell you what they sound like; instead, find out from my fellow blogger Stone of Metal Odyssey or listen to thirty seconds of “Haxan” and find out for yourself.

Now onto Symphony of Malice.  This was the band’s first show, but frontman and guitarist Gustavo Sinaro has been working on the material for a few years.  Bassist Jeff Curtis, guitarist Steve Libero, and drummer Mike Gliniak round out the lineup, and together they make a very tight outfit.  Symphony of Malice has a modern sound, but with a lot of Maiden and Metallica influence.  Hear them on Facebook or at their next show — and beware of friendly Seaside bartenders bearing free Jameson shots…

Saturday was the bad hangover.  Let’s just say I was puking yellow bile into a wastebasket until three in the afternoon…  So, yeah… 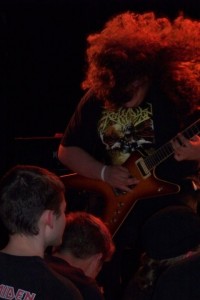 The next day, I was fully recovered and ready for action.  My friend Lee’s band Lightsbane was opening for Vital Remains at the Heirloom, and gosh darn it, I was going to drive to Danbury on Sunday night to see them.  Not that I’m prejudiced or anything, but Lightsbane sounded great.  Their straightforward death metal has the occasional dash of humor — “Dumpster Cat Thaddeus,” anyone?  It’s a song about a guy finding a dead frozen cat underneath a pickup truck while he’s tripping, and it’s fucking brutal.

But I knew Lightsbane was gonna be good – I sure wasn’t driving to Danbury on a Sunday to see a shitty band.  The surprise of the night was Oath of Insanity, a young thrash band from the New Haven area.  To put it simply, their sound is Master of Puppets era but they’re only as old as the Black Album.  Oath of Insanity’s stage presence and dual-lead riffage were impressive regardless, but their young age made it that much more notable.  I don’t know how long they’ve been playing shows or really any other goddamn thing about them – no time for journalism this week – but I definitely want to see them again.

I only made it about halfway through Vital Remains, long enough to say to myself, “The guy has spikes on,” and finish my High Life.  I should have some more thoughtful reflections on these death metal icons, right?  Well, sorry.  It was Sunday night after all, and sometimes the real world interferes with “supporting the scene.”  Your homework?  Go listen to Arcane Malevolence, Lightsbane, Symphony of Malice, and Oath of Insanity…

…And then go to a concert!  And try not to spend the next day throwing up!