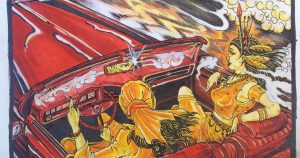 LORDS OF BEACON HOUSE are a San Pedro, California trio who play 70’s psych rock with a proto-metal heft to it.  The material enclosed at the link below is from the forthcoming split album with bro band Great Electric Quest (to drop via Glory Or Death Records on 6/16/17).

It’s also the first leak from a wealth of new material that is all produced by Steven Kille of the band Dead Meadow.  An EP and full-length are to follow later this year.

I gave these two tracks a listen, had a bowl and a coffee, and thought to myself that this was a real throwback to the 80’s rock scene — by this, I mean the heavy, heavy 70’s influence that seeps out from every inch of Lords of Beacon House aka LOBH.

Taking a note from history I found that this is a glimpse of what is to come from LOBH this year, with a E.P and full length on the way later in 2017.

“Cadillac Daddy” was a take it or leave it track, but the “Spliff Ripper” had that stoner “chill the hell out” vibe I was looking for.  I could see the releases being a varied sort of sound, a series of either experimentation or evolution. I for one will be looking to hear/see what is coming.

Speaking on the two new tunes Amir Ouaddi (bass/vocals) said, “We’ve been in the studio a lot over the last few months with Steven Kille of Dead Meadow recording us. These two particular songs ‘Cadillac Daddy’ and ‘Spliff Ripper’ were more groove inspired and good-time than the other material we recorded.  We’ve been friends with Great Electric Quest for a while and we think these songs are a good compliment to what they are doing on the split.”

Listen to “Cadillac Daddy” via The Obelisk premiere here, and hear Spliff Ripper on Destroy/Exist.

The split will be released via Glory Or Death Records in CD, Cassette and digital formats on June 15th.  Great Electric Quest will appear on several of Lords Of Beacon House June tour dates.  The band also has West Coast tour dates set for July with their brother band from Los Angeles, Roast (all tour dates appear below).

Rounded out by Michael Lopez (drums) and Peter King (guitar), Lords Of Beacon House came together in 2014.  Friends for fifteen years, the trio have cut their teeth playing in a variety of different bands from metal, punk to outsider music.  However when they started jamming together the sound that came out was more straight rock than anything they did before.

Since then Lords Of Beacon released a self-titled full-length (2015) via HomHomHom and have shared stages with such stoner/doom luminaries as Pentagram and Om.

In addition to this split, the band has recorded an EP and full-length to be released in the coming months.  Titled the Fool’s Gold and Recreational Sorcery respectively, Ouaddi reveals that these releases comprise the second and third parts of a trilogy (started on the 2015 debut album).  Speaking on the theme Ouaddi says “the trilogy consists of phases of our existence including life, death and ascendancy.  Life is definitely a journey that a lot of people are blind to as they become trapped in materialism and its distractions.”

Below are confirmed tour dates:

Some of this articles information was taken from The Obelisk’s Review of this split.