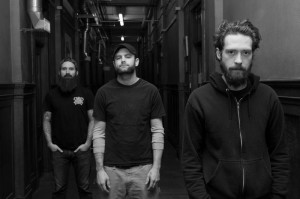 Grizzlor in all their bearded glory. Photo by Gary Ahmed.

In the short time they’ve been together, New Haven noise-rock merchants Grizzlor have made quite an impact on the local scene with a series of releases including the We’re All Just Aliens EP in early-2014, followed by the When You Die 7″ later that year, and a split 7″ with Norwegian-noise makers (and another Alt-Control favorite) Barren Womb in 2015. They also went on raging tour of the States together to celebrate that record’s release.

In addition, the band, which consists of Victor on guitar/vocals, Wade on bass, and John on drums, are one the best live acts going, regularly laying waste to local venues and out-of-state venues with their angular, weird, loud and aggressive sound.

With their slot on the inaugural edition of the Death To False Metal Festival coming up, we sent John some questions pertaining to a whole variety of subjects that concern the band. His answers are below.

What were your motivations for starting the band? Did the band have an easy birthing process?

Well, the birthing process, while there was no female anatomy involved, was pretty simple, I guess. Wade came to me a few times looking to start a death metal band and we talked about making it happen, but it just never did. Then, this one time Victor randomly sent me a song he recorded and it had this super cool Nirvana Bleach-ish vibe going on and I was totally digging it. So, I mentioned it to Wade and the three of us ended up getting together to jam and it eventually morphed into what is now Grizzlor. Our creation story definitely isn’t as wondrous as the book of Genesis or anything, but that’s pretty much how it happened. As for motivations in the beginning, we kept it pretty basic. We pretty much just wanted to play some shows in hopes people would eventually know we exist, and then go from there.

How is the writing handled in the band? Is everything split up three ways? Do people have specific roles when it comes to this?

Victor’s pretty much the riff mastermind of the band. He’s constantly, relentlessly writing new stuff. Sometimes we wonder if he’s some sort of cyborg. The songs are usually based off a loose topic we were complaining about the day before at band practice or something. A good example would be this song we wrote, which will be on our next record, called “Winter Blows”. We wrote that one this past winter when it wouldn’t stop snowing for a month.  Usually what happens is Victor will come to the table with a song idea and we’ll jam it out about 25 times in a row until it sounds like it’s done. The more we play it, the more our individuality comes out in the music.

In the short time you’ve been together, you have put out an EP and two 7″‘s. In addition, your profile has steadily grown, both in-state and out-of-state. Did you expect it to happen this fast? Why or why not?

We really didn’t expect it at all; you never really know what to expect when you start a new band. We’re super humbled, having received so much positive attention so far. When we released We’re All Just Aliens, we had only played one show as a band. So, we were pretty much flying by the seat of our pants. We didn’t know what the hell we were doing and we didn’t really know anybody. Our friends in Sperm Donor were the ones to actually get us on our first show, so we owe it to them for helping us out. After that show, we started getting more and more offers to play. Anyone who hasn’t yet should seriously check Sperm Donor out. They indubitably rule.

Have you started thinking about your next release? Will it be a full length or another EP? And when? Are you in talks with any labels? (I know at one point Chris Spencer from Unsane was interested in putting out a release from your band on his Lamb Unlimited label.)

The Lamb Unlimited release is sort of tabled for the time being. But, we are currently working on a new record. We’re releasing a 7 song 7” with Hex Records out of Syracuse for some time this winter. Not sure if it will be 2015 or 2016, but definitely winter time.  We’ve pretty much finished writing and recording all the songs and have some rad cover art for it in the works. We’re super psyched with how all the songs are sounding and are pretty excited to get it out there. We’re hoping this EP release will put us in line for our first full length.

Also, you are in the midst of creating your first music video. How far along in the process are you? Can we expect to see it soon? And what will it be about?

The music video is actually complete. We’re hoping to have it out in the coming weeks (today being 7/20). We’ve got an outlet to premiere it and all we need to do now is set a release date. By the time this interview is out, it’ll probably be up. A good buddy of ours filmed it for us out of the kindness of his heart. We filmed it for our song Stoned and there’s really no storyline in the video to go along with the song. If there was a filmed storyline to go along with the lyrics, it’d probably just be about some stoner dude who thinks everything he does is awesome while he’s stoned, then realizes it really just sucks the next day.

Right now, the style of weird, noisy punk, you play is starting to make a bit of a comeback in underground rock circles. What is your take on its renewed popularity in the underground? And what about in CT? Do you see a mini-noise rock scene starting in state?

I guess we’re so oblivious to our surroundings that when we started writing songs, we didn’t even realize this sort of thing was making a comeback. We were actually kind of wondering who the hell we were going to play with. But, once we started looking for shows and looking for cool bands, we realized there was a ton of cool shit going down with some really good bands making it happen. If you dig around, there’s a lot of really, really great bands popping up all over the place. I’m not really sure why things happen in waves, but I’m pretty happy it’s happening. There’s definitely some sense of renewal in the air and it’s super exciting. I can see somewhat of a noisier presence emerging in CT.  A lot of great bands and people have been coming forward and working together to make for some pretty awesome shows. CT gets passed over far too often for its neighboring states when rad touring acts come through, so I’m hoping that’ll change in time with all the cool stuff that’s been happening in the state.

What does it mean to be picked to play the inaugural edition of the Death To False Metal Fest?

We’re really happy to be a part of it, especially it being its inaugural run and all. It rules seeing stuff like this happening locally. Chip McCabe is always doing something awesome when it comes to music and Connecticut, so as soon as he asked us if we wanted in, we didn’t hesitate to say yes. It’s cool having some other local noisy pals playing on the bills, as well – Nightbitch, Tomb & Thirst and BRC, all killer bands.

What is next for the band?

Right now, we have a bunch of fun stuff on the horizon. We got the new record this coming winter with Hex Records; a small 3-day stringer of shows in the works with our homies in Bardus (Philly) for some time in October; we’re playing the yearly Riotous Outburst Records Fall-Fest at AS220 in Providence, 9/24 with Philly’s Die Choking; some tentative touring talk with some tentative bands for 2016; and hopefully… a band van? One that preferably gets from point A to point B and has a mural of a cowboy riding a horse on the side.