Virginia rockers Alluvion are gearing up to release their third full length album, The Secret’s Out.  Defined by their electrifying live performances and hardworking DIY work ethic, there is no way to keep this band a secret.  Check out their track “Mayday” below: 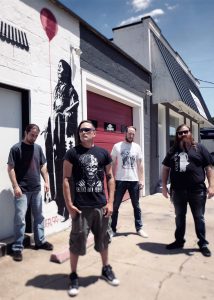 Alluvion is a 4-piece post-metal band formed in rural Virginia in 1999.  Mixing elements of melodic metal, doom, psych and noise rock in their sound, the band has sustained itself throughout the years with its ambitious, hard working attitude and D.I.Y. approach.  They have toured the East Coast, sharing the stage with many bands and becoming known for delivering immersive live performances.  2014 saw the release of their self-titled debut full length, followed by 2016’s Reverberations EP and 2017’s critically acclaimed  …Of the One Consciousness.  Alluvion’s latest album, The Secret’s Out, is scheduled for release on September 6 2019.