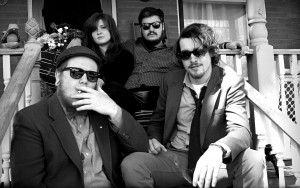 Canadian rockers Bad Reed released their three-song EP in June of last year and it’s beginning to make its way down to the States.  “Slackjaw Romance” is the standout track.  The delicate intro gives way to an irreverent ballad about unhappy love.  Its refrain, “All I want is a pack of cigarettes / And a bottle to knock back” might sound cliché on paper, but the rhythm makes the words’ assonance really stand out.  (Yes, assonance is a thing.)

Vocalist Sydney Sollazzo has an interesting voice — she sounds like a real person, someone who could be your friend.  Sollazzo plays keyboard in Bad Reed as well, and is joined by Costa Chatzis on percussion, Austin Sharpe on bass, and Graham Walker on guitars.

“Cassava” pulls influences from reggae and 90s rock but it doesn’t fit together as well as the pieces of “Slackjaw Romance.”  “Punch It” also seemed to draw from a lot of varied influences.

Bad Reed’s next show is in Guelph, Canada and it remains to be seen if and when they will be playing closer to Alternative Control’s readers — but find them on Facebook and the web for updates!