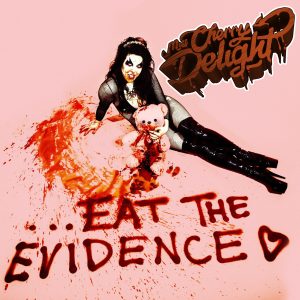 Miss Cherry Delight is a rock performer from NYC whose music and live performances are meant to shock the audience. As a burlesque performer, she brings a sense of macabre theatrics to her latest artistic endeavor. Her new album, Eat The Evidence, just came out so we thought it was would be a good time to send her some questions on a wide variety of subjects pertaining to her music and performance.  In it we cover her background as a burlesque performer and performance artist, her thoughts on the nature of shocking people in 2019, and the relationship between her onstage and offstage personas.

What follows is long, detailed and very graphic discussion of many adult themed topics. So, if that’s not your thing, don’t tell us we didn’t warn you. For the rest of you, enjoy.

How did you make the transition from being a burlesque performer into being a shock rocker? Does your background in burlesque help you?

I’ve been a burlesque performer for the past 11 years, and I’ve been professionally singing for 20. Music has always been a huge part of my persona. I produced an ongoing show called “Cherry Melodies” that involved a live pit band. With Cherry Melodies, I specifically booked acts that were not only showstoppers, but were to songs that I knew I’d knock out of the park. I have a classically trained background of show tunes, blues, and jazz, but also sang rock whenever I had the chance. Cherry Melodies had all kinds of variety acts to all kinds of songs to show off my range, from David Bowie to The Mars Volta to Whitney Houston. After doing this show for a long time, I decided in the spring of 2018 to focus on rock and metal by doing “Cherry Hellodies.” I hired a bunch of professional rock musicians that turned the entire show into a concert with me. It was my biggest cast, the most songs I’ve ever sung in one night, and my first sold out show.

After singing everyone else’s songs, Bambi The Mermaid encouraged me to find my own to write and sing myself. I write my first song, “Cherry Blood” August 18th 2018, and on May 11th 2019 at the release party for my 14 track album, an entire packed house sang along to “Cherry Blood” and knew all the words. That was a proud moment for me.

As far as being a shock rocker, what do you think it takes to shock people in 2019?

I’d say my entertainment style over the past decade went from burlesque, to performance art ambushing in the disguise of burlesque. True shock rockers just do what feels good and is real for them, and bring something to the table that makes them feel alive that they can share with their audience. I think shocking for the sake of shock is stupid. If you have to express yourself and the only way you can truly do it is to push the boundaries and it makes people notice and scream, that’s shocking for them. They didn’t expect it. They expected less, and they got so much more. And that’s beautiful.

In the performance art part of my career, I am known for being stark naked, blood soaked, with white eyes, I’ve finger fucked myself on stage facing the audience, I’ve rubbed a fresh pig’s heart all over my body (for 10 years I’ve done that one), I’ve had simulated sex with life-size prop skeletons on stage by ripping their arms off and jamming them hard against my pussy, I’ve ripped up many Bibles in bulk, and I use a wireless Hitachi vibrator on myself for the duration of my song “Ultimate Sinner” when I sing it live with my band. But, the most important thing about all this to keep in mind is that there are reasons behind every one of these moments. It fits the narrative, it’s expressing a point, the audience is on the same page as me with exactly what I have to say and why I’m saying it either with my voice, or my body. There is a clear story been told that even the drunkest bro in the audience understands, and the whole audience is on the edge of their seats, attention undivided, and ready for any tasty morsels thrown at them. You never just pour a Solo cup of blood on yourself and tell yourself you’re a cool spooky artist. Would you leave the house and pay to see that? Would you be shocked? I wouldn’t. And to my misfortune, I’ve seen that done.

Shock’s intention is not titillation, it’s about giving a theatrical gift you never thought anyone would dare bestow upon you. Shocking is an exchange of extremes between you and the audience. Shocking is using your imagination to make someone think for a change. It’s moving people emotionally in all ways whether they scream with delight, are offended, cry tears of sadness or joy, or even vomit. Shocking is doing all that, having fun, and never apologizing for it.

Who are some of the major influences on your music? Why? Are there are any non-music related influences for it?

What is your stage show like? What are you trying to convey through it?

My stage show is exciting, electric, EXTREMELY sexual, and real talk. In ideal venues with space allowing, there are projections by Dylan Mars Greenberg, backup dancers choreographed by Faux Pas Le Fae, several costume changes by Lori Gassie, lighting direction, a 7 piece rock band that massively shreds lead by my producer and lead guitarist, Justin Mathews, and a great backup singer, Laura Lee Anderson, that has a wonderful sexy dynamic with me. I’m also very lucky to have the talents of drummer Lucas Leto and synth player, Michael Butterly of one of my favorite bands, The FMs.

Being in Cherry’s world is a dark sensual, blood soaked adventure, and takes a turn halfway through to an even darker place with more stories that involve love, loss, and building intensity and emotion. It’s unexpected in a great way.

As a follow up, have you faced any problems with censorship because of it?

I haven’t experienced censorship with this project yet, mainly because the venue of Sideshows By The Seashore, a theater I have residency at being Miss Coney Island 2013, allows me to do whatever I want on stage, without anyone telling me what to do. As I begin to branch out with more venues outside the city, I will have to tone down some things in order to not get arrested, as many other places outside this city are strict. It sucks.

On your debut album, Eat The Evidence, what type of message were you trying to convey through the lyrics? And through the music?

This is a hard rock, goth industrial grunge album with pop elements. There is a lot of sexual frustration as a core component on this album and a desire to be touched at times to the point of bloodlust. There is also a lot of opportunities to pull over and make out to some of the hottest tracks on the first half of the record, There are times you can laugh, and also moments where you feel pain. There is also a song towards the end about my real life story called “Mine” about my history with childhood sexual abuse and mental abuse from my immediate family. I want that particular song to help give strength and power to anyone who has been, or is in that situation I conquered.

All in all, this album has a lot of feelings. It’s danceable, you can headbang in your car to it, you can fuck to it, you can cry to it, sing along, scream along, you can go through a lot of emotions with it. It’s relatable, it’s heavy, it’s dark, the melodies by Justin Mathews are incredible and my lyrics pour out everything I am. Not to mention, I sing my fucking ass off on it. When it’s over, you’ll walk away feeling satisfied.

I’ve always been more comfortable on stage because its freedom to be as extreme as I want. I have to curb that in real life. Miss Cherry Delight is a character, but in personality, she’s also me at my very best. Cherry on stage is collected, confident, and has the room wrapped around her finger. She’s evil, but relatable and lovable in her own way. However, a lot of her evolved backstory is inspired by elements of Jeffrey Dahmer’s legacy. She doesn’t kill out of anger or hatred, only for sentimentality. She isn’t a vampire or a monster, but her past has some heartbreaks, and she doesn’t expect her relationships to work out. In the Cherry Blood music video, we see her targeting the nicest most attractive people, men and women, that she knows would be safe enough and fun enough to have a sexual romp with, and then dispose of before she becomes vulnerable. Those who fall under the spell of her charm find it irresistible to say no to coming home with her. She enjoys what she does to a point, but really it’s more of a tick that she deals with. She protects her heart by stopping a real romance before it can begin. And consuming someone is to keep them forever. She has to hunt. She has to fuck. She has to poison them with her cherries, and she has to eat them. She can’t stop, and she doesn’t plan to. It’s kind of a black widow situation. Cherry is cool, sexy, and very dangerous. You WANT to hang with her, you WANT to be her friend…That’s how she gets you. To consume the bodies of lovers, hiding her sexual urges resulting in her crimes against humanity in order for her to stay mentally stable is to Eat The Evidence.

Cherry Daddy, another new. character. I explore, is a Pro-Dom who tops from the bottom, and is hopelessly addicted to Oxytocin, the neurotransmitter known as the “love hormone.” Sexual contact, specifically orgasms, as the highest dose possible and is what she needs 24/7. Her harem/cult of “Cherry Sluts” provides that, no questions asked, no pause taken. It’s immediate devoted love at all times at the snap of her fingers, period. She’s my additional fantasy character that is spoiled with unlimited wealth and kisses. Her devoted inner circle takes care of her whether she just wants someone to hug, or a straight up gang bang. It’s “Yes, Cherry Daddy” for every response. That’s a world that’s a great time to live out on stage with my backup dancers. Everyone gets excited when Cherry Daddy appears in her Dom hat and beautiful biker coat with ringmaster tails made by Glitter Macabre of Slutty Ghost. Summed up, Miss Cherry Delight is the fighter. Cherry Daddy is the lover.

What is next for you? Touring? Another album?

Right now it’s about people hearing me, knowing about me, and doing as many New York gigs as possible. I definitely want to tour by the end of the year in at least 5 cities. Especially Salem MA and Richmond VA. I’m also very interested in doing some remix singles for Eat The Evidence, and have already begun to write music I’d like to have on the next album. The big event coming up will be Cherry Hellodies II on August 17th in Coney Island. You’ll be able to get tickets for that on www.coneyisland.com in the Events section. I can’t wait to bring my music all over the place and meet freaks from around the world!