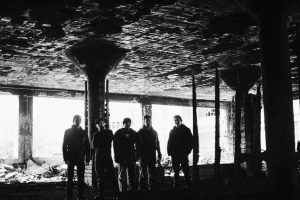 A band in the local Connecticut metal scene often consists of people that know how to play and want to play heavy metal. Well, duh. But it takes a special kind of band to take that ability and passion and turn it into innovation. There’s nothing wrong with a group of people getting together and paying tribute to Meshuggah, Death, Morbid Angel, or Necrophagist. Write a few songs, play a few shows and have some fun. But Xenosis is different and always have been. They certainly show admiration for the aforementioned bands, but they’re way more than a rehash of these influences. They proved this on their debut and they continue the trend on this new chapter, Devour and Birth.

The first thing that struck me right away is the excellent production. To be honest, I had forgotten that I was listening to a local recording. Not trying to put down any other band’s recording efforts, but this is some professionally mixed music. The guitars are crunchy and imposing. The bass is clear and melodically distinct. The drums have a great deal of presence, but don’t drown out the other instruments. And of course, the death vocals are front and center in my headphones – the way it should be. Kudos to the band for refusing to take shortcuts and persevering through what must have been a laboring attention to detail.

What’s the genre? Technical melodic death metal I suppose. I’d be careful with resorting to tags however. Despite the album’s death metal sound, Devour and Birth provides many musical surprises. The bouncing and swelling riffs that bookend the song “Army of Darkness” provide a very cool contrast to the emotive progressive metal charm that makes up a good chunk of its meat. In fact, callous extreme metal moments in these songs are often offset by crescendos and departures of a more melodious nature. These moments add depth and dynamic to what could have been another catalog number in death metal’s abundant discography. Nothing here delves far into the optimisms of traditional melodic death metal, which would cheapen the album’s sense of danger. Rather, melodic guitar serves as moments of relief in the tension. The briefly divine break in a song like “Concave” for a Schuldiner-like solo piece catches the listener off guard before dropping back down again into a spiral of start/stop riffage.

Devour and Birth has a distinct extraterrestrial flavor to it. With any science fiction themed metal record, there’s a healthy dose of horror and fear. That rings true here as well. All the tracks are on the attack at all times, like an intergalactic monster cling-on tied to your exploration spaceship. And yes, the monster is shaking and clawing the fuck out of it. The album is brutal and heavy, as it should be. But it’s also just as much a grand and epic adventure as it is an exercise in death metal muscle. Whether Xenosis is being polyrhythmic, complicated, swift or dissonant, it all feels like a vicious and visual drama. The way the title track opens up into an atmospheric expanse around the three minute mark makes me feel like I’ve walked out of a deep cave on an icy planet, gazing across the star field above the white stalagmites on a clear night. 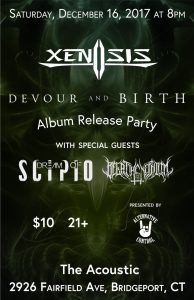 Closing track “The Projector” is probably my favorite track here. It gathers up everything the album represents in less than seven minutes, but approaches this summarization in a very reptilian fashion. To be honest, I’m not even sure what “reptilian” even means. I actually wanted to use the fake word “lizardy” to describe the music here. Even though it sounds ridiculous, it’s one of the biggest compliments I can give. If I have to resort to made-up language to accurately express the music I’m hearing, then it’s proven that Xenosis is doing something more than just playing technical melodic death metal. They’re writing music as innovators.